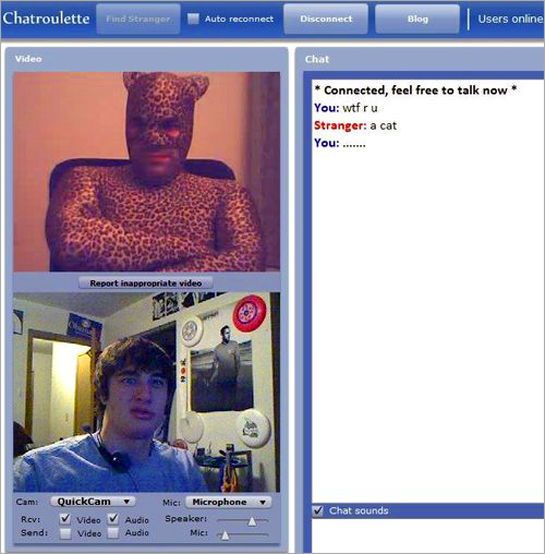 A Typical Day on Chatroulette

Genetic scientists love the humble Fruit Fly (Drosophila melanogaster) because it has such a short life-cycle; several generations can live, reproduce, pass on genetic material, and die within a month. In this column, I’d like to suggest that Chatroulette is the current fruit fly of the internet, by which I mean, Chatroulette, its users, and the responses to it, evoke many of the big issues facing internet users today, and do so in a far faster and more immediate way than on the internet at large. On the off chance you’re unfamiliar, Chatroulette does exactly what the name implies: the website randomly connects two users with webcams and chat functionality; there are no log-ins, no registration pages and very few rules, none of which appear to be enforced.1 Notably, Chatroulette was created by Andrey Ternovskiy, a 17 year old Russian student who, legally, would be considered a child himself in many countries. With that context in mind, I want to address Chatroulette in terms of search, ‘Sex!’, privacy, copyright and creativity.

Search (spelled F9)
Yes, Chatroulette has the slowest ‘search’ out there today, but despite its rudimentary design, search is still one of the key drivers behind Chatroulette’s success. It is social search, not in the sense Google means, which is web search refined by your clearly articulated online social networks, but rather social search in the sense that Chatroulette users are continually searching until they find someone with whom they want to interact socially. Chatroulette presents a smorgasbord of the human condition, with shocks, cocks, hugs, and friends all potentially staring back from your computer screen. Judicious application of the F9 or ‘Next’ button means many users spend more time searching than socialising, more time hunting than chatting, but that’s part of the joy: most Chatroulette users don’t know what they’re searching for until they find it. In that sense, Chatroulette’s search is the anti-Google; it’s a social search engine which only works if you can’t already articulate what you’re looking for.

Sex!
According to much of the mainstream media, you don’t find sex on the internet, you find ‘Sex!’ with that magical exclamation mark which transforms three letters into ten, spelling out sensationalist gold in its most popular form: moral panic. Case in point, Fox News’ Joshua Rhett Miller reports that ‘Chatroulette Is ‘Predator’s Paradise,’ Experts Say’ while Sam Jones of the more respectable Guardian poses the question ‘Chatroulette: risque chat service or pornographic site?’ While these reports are not without some grounds – there do appear to be a lot of Chatroulette users who are unlikely to be legal adults, and there is certainly an annoyingly high percentage of faceless men masturbating on camera – this problem is neither new nor in any way unique to Chatroulette. While the potential to see such content is certainly a clear reason for some people to avoid the website altogether, the fact that these issues are indicative of online culture can also serve as a reminder that teaching young adults, and older ones, strategies for dealing with unwanted material can be vitally important. For some, the risk isn’t worth the visit, but for others the richness of random connectivity can be enjoyed with a keen sense of when to look away, when to engage, and when that F9 key will save your sanity. Social media researcher danah boyd expressed this far better when she said:

“I realize that this creates the potential for seeing some pretty gross and/or problematic things and I certainly don’t want to dismiss that, but I’m pretty certain that teens are responding the same way that I’m responding – by clicking Next. Is that ideal? Probably not.”2

Ideal or otherwise, it’s a sensible strategy for most Chatroulette users. On the moral panic front, sometimes the only way to contextualise the excesses of the media is to take those excesses to their logical extreme, which is where Jon Stewart’s team on The Daily Show excel.

Privacy
Despite the notion that Chatroulette is anonymous, like most moments online when people presume their identity is shielded, this ends up being far from guaranteed. The clearest illustration of just how private Chatroulette isn’t comes from a very quick glance at the Chatroulette Map. This mash-up uses screenshots and the IP addresses of Chatroulette users to extract geographic locations and place them on a Google Maps-powered globe. The map only features a tiny percentage of users, and is only updated periodically, but as their FAQ points out, anyone with a little technical know-how can easily extract this information. Indeed, far from sinister, the creators of the Chatroulette Map clearly have their own notion of privacy they’re trying to respect, as they currently display this notice on their landing page:

“We’d like to advise maine.edu to stop using student’s names in their hostnames. We’ve decided, at least for the time being, to hide IP & host information as some user-identifiable information was found in some entries.”

What the Chatroulette map clearly flags is that in online contexts, notions of privacy and anonymity are slippery at best. While it was a little worrying to hear Google CEO Eric Schmidt being so flippant about it, his general point that we should never presume anything done online is entirely private or anonymous is good general advice. 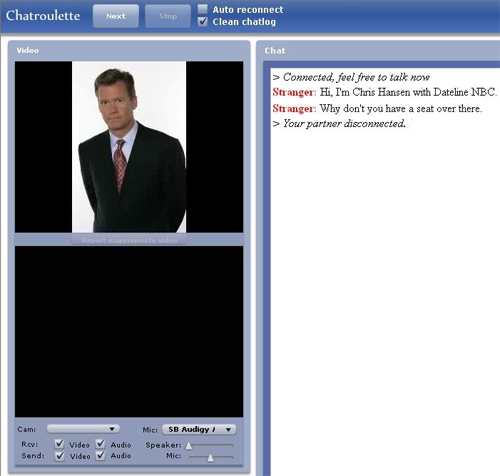 The implication of ‘Sex!’ on Chatroulette incites moral panic

Copyright and Creativity
Copyright and creativity online are a bit like a perpetual motion machine; their simultaneous opposition and mutual reliance drives so much of the content which appears (and disappears) online. Chatroulette is clearly a creativity engine; a rudimentary YouTube search returns almost 4,000 videos with Chatroulette in the title or tags, and while some are mean and banal (such as a fake hanging video) other videos are actually quite creative (including the saccharine but feel good ‘Hearts, Hugs & Kisses on ChatRoulette :)’). More explicitly commercial interests have already started to experiment with Chatroulette, too, with indie band Nurses using the service to record a music video for their song ‘So Sweet’.

Probably the most loved YouTube clip generated by Chatroulette is the ‘Chat Roulette Funny Piano Improv #1’ by ‘Merton’ which had clocked more than 4 million views in less than a fortnight, before YouTube took the clip down. Merton’s humourous piano improvisations, revelling in the randomness of the service, resonated with viewers across the web. While not clearly explained, the seemingly inevitable take-down by YouTube seemed to relate to the ‘ownership’ of people’s Chatroulette contributions. This immediately begs the question, do users have a reasonable expectation of privacy when broadcasting their face to potentially anyone on the web? How do people recording videos using Chatroulette ensure the people recorded have given their permission to appear? Does that question even make sense in an environment like Chatroulette? Do people ‘own’ their contributions to Chatroulette if someone else transforms those seemingly ephemeral contributions into a more lasting form? There are no easy answers here, especially given that some Chatroulette users are clearly not legally adults. With those issues in mind, while the blurring out of some of the random strangers diminishes the clip’s intimacy somewhat, it is nevertheless a relief to see an edited version of Merton’s clip return to YouTube:
[youtube]http://www.youtube.com/watch?v=JTwJetox_tU[/youtube]

While there was some speculation that Merton was actually Ben Folds, that rumour was largely quashed nine days after the initial video when Ben Folds recorded an ‘Ode to Merton’, mimicking Merton’s style right down to the hoodie, and playing his own improvised piano songs, but upping the ante somewhat by doing so in front of a live crowd.3 While there might be some legitimate debate as to whether Ben Folds’ homage was flattery or just a savvy business move cashing in on someone else’s viral hit, the internet petri dish that is Chatroulette is certainly going to be seen as ripe for commercialisation in many different ways. The clones are already marching in, including RandomDorm and Faceroulette.

If you need something a little more highbrow, Kieran Healy on Crooked Timber did ask Chatrouletters to “show me ur books”, but the real litmus test, which irrefutably demonstrates that Chatroulette is a microcosm of the internet, comes when the cute cats take over; enter Catroulette. 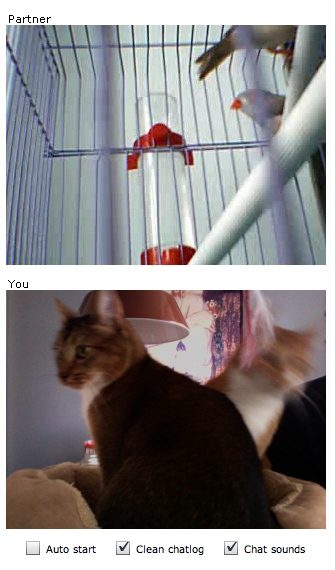