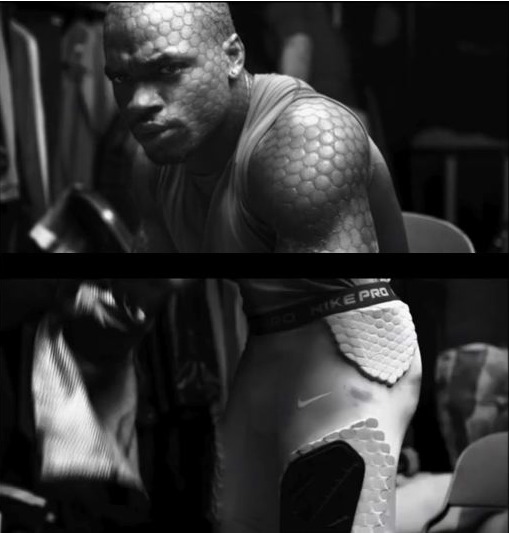 If you’ve seen it, then you probably remember Nike’s “Alter Ego” commercial where Minnesota Viking running back Adrian Peterson’s skin is monstrously inscribed with the pattern of the “Pro Combat” apparel worn under his uniform. The image is a striking digital fusion of the synthetic and the “natural” or, the technological and the human, and the message is just that –technology so similar to nature that the boundaries are blurred. If we didn’t first see the Pro Combat protective padding on Peterson, the pattern on his skin might otherwise register as reptilian armor. That is, the athlete would register as a human-nonhuman hybrid species. Befitting such uncanny imagery, the advertisement’s mise-en-scene has a deep, inky, gothic tone with snow falling on the field of play that, as rendered in high contrast black and white, might as well be ashes from the apocalypse.

This commercial encapsulates so much of what fascinates me about the tenuously sublimated socio-psychological imaginary of professional sports. One of the most naked cultural sites for appreciating all that our science-based modernity is supposed to have suppressed but, paradoxically, cannot do without (at least in a controlled form). Elite athletes glorified here as subjects on the margins of humanity, pushing the limits of human potential in primal, physical ways rather than intellectual ones. As the “Alter Ego” ad suggests, we imagine them as possessing almost super-natural powers, as super-humans (or is it the post-human?). This encompasses a lot things, but here especially the fetishism of technology, the breathing of life into “dead” technology so it becomes more than its mere instrumentality or functional logic (high-tech underwear in this instance). But also the human itself as techné (the Greek root of “technology”), defined as art or craft with a technological basis. 1 The athlete as natural technology, as a refined instrument and artist of spectacular play-making. Always in tension in this scenario is the dystopian view of nature’s technology as irrational, dark, monstrous, Frankensteinian, animal and libidinal, versus the utopian views of technology as rational, light, functional, contained and controllable, or comfortably “dead”. 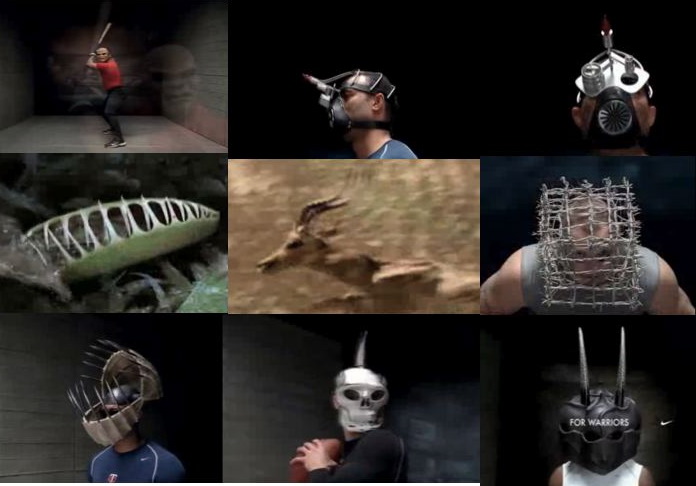 It’s surely not news that advertising excels at creatively permeating consumer technology with aura or “spirit” in the interest of creating commodity fetishes in consumers. Yet professional sports and its commodity culture does so in ways that more conspicuously implicate the status of the “human,” of “nature,” and its uneasy relationship with technology and, more generally speaking, the repressive complexes of modern life. Especially sports ads that utilize gothic, sci-fi imagery –as with the literary and cinematic genres themselves– present an interesting case for considering the intersection of corporal limits and their technological interface. The issue at hand is also well classified as a concern with the “techno-cultural body,” and in the generically related instances I tie together here, techno-cultural bodies conveyed in a hybrid of dark gothic and science fiction scene making and iconography.

The functional basis of much sporting gear and apparel is to enhance natural attributes and instrumentalities of athletes in terms of efficiency of action, physical durability and comfort. In other words, adapting to environments. Compared to high-tech electronics this is comparatively low-tech stuff, like technical refinements in padding and other bodily protection. I prefer to think of them as performance enhancing mediations of nature. Advances in consumer electronics, as a point of comparison, are also mediations of nature, or “extensions of man,” to use McLuhan’s famous phrase, but tend to be more cerebral-sensory extensions –further alienated from basic kinesthetic functioning– than say running shoes or Under “Armour’s” moisture wicking apparel. Moisture wicking shirts mediate body temperature and perspiration; IPods mediate our cognitive interaction with the environment. And athletic action itself is variously mediated: football is highly “armored” (physically mediated) play while conversely, MMA (mixed martial arts) is predicated on the minimization of certain mediating elements. Those small, fingerless gloves are protection for hands, not opponents’ faces, and they guarantee a level of “reality” or “naturalism” in the hand-to-hand combat of trained martial artists (or technicians of human submission).

Performance enhancement and the increasing prodigiousness and prowess of elite athletes is perhaps matched in the enhancements of its electronically mediated transmission to fans, while the structure and rules of the sports themselves remain more or less stable. More spectacular viewing ecologies at least highlight, if not beg for, more spectacular playmaking. Thus something like the new Pro Combat apparel may give a running back like Peterson that added confidence to go for broke or, as one Nike commercial says, to “leave nothing” (and give everything to the game). The “Alter Ego” advertisement suggests as much; that Peterson’s combat apparel makes the man believe he is head-to-toe in armor. And to visualize it as corporeal –fully embodied, fused, merged, rather than simply clothed– propels the merely technological into the realm of the aesthetic, the aural, even the spiritual.

And the title of the commercial is more suggestive than it may first appear, getting to these issues of the techno-cultural body, technology as “other” than human (and the alter-ity of the elite athlete compared to the average(d) human). As suggested earlier, Peterson’s digital mutation is an image configured in some sense as primitive and monstrous (or animal like), but also advanced and technological –the ancient and timeless re-surfacing to give aura and life to the technological. 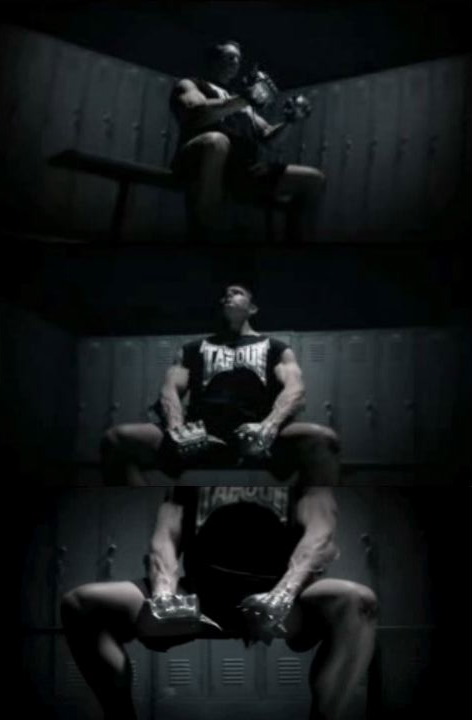 Tap Out’s “Hammer Hand” commercial is another sports apparel ad, but with a less direct narrative connection to its products. (Tap Out trades mostly in t-shirts with gothic imagery that have become widely associated with MMA cultural membership, not advancing the sport through equipment technology, like Nike). Hands are viewed as one of a fighter’s most noble instruments of destruction (after “heart,” that is), and indeed, “Hammer Hands” mutates fists into industrial instruments with grotesque, medieval styling. Are aspiring fighters and MMA fans wondering about the untapped potential of their fists? Do we imagine hands as primitive tools and technology for the honest, soul-bearing (or compensatory?), aesthetic work of fistic combat? The old romance of the body’s technological potential, (and even more abstractly the “courage” and strength of “spirit”) as an “honorable” instrument of aggression finds revitalization in the MMA promotional imaginary.

It comes as no surprise then that the military has found a brilliant market synergy with the UFC. A recent Marine Corp ad proclaims, “Some warriors fight in the Octagon, others fight in all four corners of the earth,” while intercutting between images of marine training and UFC fighters in action. When the work of war has become so technified, often alienated from the romanticized field of combat, analogizing the “glory” and “honor” of MMA combat with the work of Marines is a brilliant, yet problematic strategy. This works to re-mythologize and romanticize military combat, which is surely impossible to accomplish with any actual reference to its real theatres of operation.

I admit to my own seduction by the Nike ads. It’s hard not to be. They succeed at artistically conveying the deep ambivalence of our relationship to natural physical limits and our aspirational technologies that seeks to exceed them. Extending our supposed limits is often hopeful and inspiring, yet it cannot exist without the imaginary of destruction that comes when it is taken too far. The Nike “Pro Apparel” commercial from several years back highlights this ambivalence through the use of masks on athletes that suggest the athlete’s prowess as an admixture of mimicry of the natural world (i.e. “wild life”) and the potential malevolence of technology gone wrong. As these images tell it, our present day sports culture, as much as it may wish to suppress it, is a performance combining versions of romantic naturalism, of eros or “life force,” but now more than ever also a science fiction theatre which cannot deny its darker side –the potential chaos of unchecked manipulations and mediations (or are they perversions?) of that nature. As a closing question (and perhaps a provocation), is the early fatality at Vancouver’s Luge track –sledding reaching new extremes– an instance of aspirational techné taken too far?