Reflecting upon my television experience of 2009, I realize that I am still intrigued by one particular show premiered in October 2009 on Sundance Channel: Man Shops Globe.  Produced by World of Wonder, this series features Keith Johnson, buyer at large for the clothing and home goods retailer, Anthropologie, who travels around the world to purchase unusual items for sale at Anthropologie stores in the US, Canada, and UK.  Each episode depicts Johnson’s trip to one national destination, with visits to antique stores, flea markets, artisans’ studios, and galleries.

My fascination with this eight-part series, which combines the familiar formats of international travel and infomercial, is multiple: 1) Since when does a man shop?  Of course men do buy things, but since when did “shopping” become a male activity on television?  2) What kind of man are we talking about?  The answer is predictable: a white, upper-middle class, middle-aged man, with “fine taste,” professional knowledge, and a dry sense of humor.  What makes this man extraordinary enough to be a TV personality?  Or is the point more the opposite—that we all can be this man with his supposedly exciting lifestyle, by consuming the symbolic text of television and shopping at Anthropologie?

3) Another related question: if this man shops, is he gay?  He is, according to press release and one passing remark by Johnson himself in an episode.  Yet Johnson’s gay identity is never fore-grounded within the show as in some other lifestyle programs such as Queer Eye for the Straight Guy, Project Runway, and The Fashion Show.  This subdued gayness of the main character can very well be considered the latest development in the “post-closet era television” compellingly discussed by Ron Becker in an earlier issue of this journal.  However, since “that’s already been done” as Johnson would say, I am more interested in discussing the last part of the show’s premise—the “Globe” as a shopping ground for Man.

4) Thus two questions: which parts of the world are featured as “the globe” in this show?  And more importantly, why does the man have to shop the globe?  Why can’t he just shop locally?  It is not new that globalization is represented as an expanded shopping opportunity on US television; travel shows and other reality programs portray a trip to Grand Bazaar in Istanbul or Tsukiji Market in Tokyo as casually as a trip to the corner store, while House Hunters International presents even the purchasing of a century-old mansion in Tuscany or a summer home in Cypress as an everyday process.  For anyone who has visited one of those pleasantly exotic Anthropologie stores, or who is imaginative enough to connect the retail outlet to its brand name (as in the academic discipline requiring field work), it’s not hard to understand that the company is premised upon delivering unusual, often foreign goods to the domestic middle-class audience with an aura of authenticity, at a reasonable price.  Since there are only so many ways in which one can be authentic in this age of advanced consumer capitalism—going ethnic, going vintage, doing arts and crafts, or cleverly mixing any combination of the above—, the globe is quite necessary, indeed, for today’s consumer-citizens to express their singular individuality through shopping. 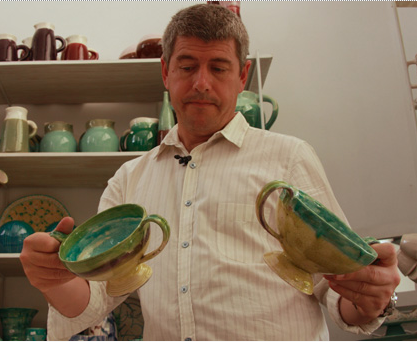 Man Shops Globe, however, takes this premise one step further by evoking the narrative of colonial exploration and reintroducing the romantic figure of a world-weary yet tireless white male explorer.  The logo of the show presents Keith Johnson as a pre-modern explorer in a vintage-style drawing with a motto, “His Job.  Your adventure.”

The opening credits present an old-fashioned, leather-bound suitcase, superimposed upon a map of the world.  Johnson’s voiceover follows, “My name is Keith Johnson… I travel around the world looking for the very best things… It is an amazing treasure hunt.”  Johnson travels to destinations selected with careful considerations: France, South Africa, Holland, Turkey, India, the UK, Tunisia, and Columbia.  By choosing destinations which are a fairly well-balanced mixture of first and the third world shopping locations, the show skillfully walks the line between representational and exploitative.  The identificatory potential the show offers with Johnson’s privileged position, is certainly powerful for many aspiring viewers/shoppers/explorers, and is constantly validated by the support of his colleagues, invitations to exclusive parties, even the endorsement by President Obama himself, in the White House’s purchase of a chandelier found by Johnson in South Africa (Episode 2). 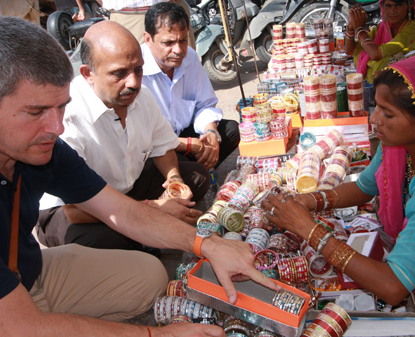 However, having grown up in postcolonial South Korea listening to tales of American tourists at flea markets in Seoul going gaga over insignificant objects like antique chamber pots, I sometimes imagine myself in place of the local merchants in the show, often seen attentively listening to Johnson, albeit rarely heard from.  Although they appear to be uniformly appreciative of the opportunity to work with Johnson, are they as willingly oblivious to the fact that the joke is partially on them? (An antique dealer in India, Mr Goel, says, “Mahatma Gandhi said ‘Guest is gold’. Guest like Keith is certainly gold to us.” The same dealer later says, “Keith, he generally chooses things for which we think. These are junk, you know”? – Episode 5) For seemingly not knowing that those objects produced by their own labor will be sold at ridiculously marked up prices to North American yuppie customers with imaginary bohemian tastes?  This is in fact, the crux of the criticism the show has received: not disclosing the purchasing price of the items Johnson “discovers” in each episode.  Yet isn’t the joke really on us the viewers if we cling to the idea that the commodity value in the age of globalization can still have any grounding in the real—i.e. the cost of human labor and creativity, which are precisely the last things that can be universalized?  This leads to my final question about Man Shops Globe.

5) Since when shopping has become no fun?  According to the show, shopping is a job, a man’s job, serious and exhausting.  In the introductory voiceover, Johnson says, “I have the greatest job in the world,” in the most monotonous and joyless voice possible.  In every episode, he is anxious, stressed, and worried that he may bore his audience by bringing back “something that’s been done before” “that you’ve seen elsewhere,” which will be “a big yawn” and a “big disappointment.”  Because he has to find a way of making things “look fresh” by repurposing found objects, often within a limited time, shopping is depicted as an agonizing mission, a radical departure from postfeminist discourses on the empowerment of shopping, as repeatedly promoted, for instance, on HSN and QVC. 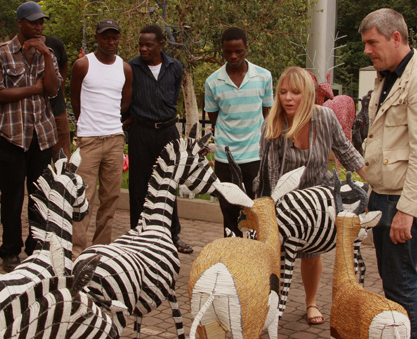 The agony and tedium of cosmopolitan shopping in my view originates from the anxiety of having to remain authentic in a global marketplace where distinction is increasingly hard to achieve.  This can thus be considered a reaction against the fear of global monoculture, shared by the cosmopolitan middle class in the industrialized world.  As articulated by many writers ranging from Claude Levi Strauss to Benjamin Barber, in globalization, the grim vision of a mono-culture feels increasingly compelling:

“An American mono-culture would inflict a sad future on the world, one in which the planet is converted to a global supermarket where people have to choose between the local Ayatollah and Coca-Cola.”1

If the transnational flow of consumer goods and creative ideas brings the specter of a global monoculture nearer, viewers/shoppers of Man Shops Globe/Anthropologie are the inadvertent culprits; and Johnson is undeniably guilty of contributing to the formation of a “global supermarket,” or a “World Market,” to borrow from the categories of World Music and World Cinema.  In the context of ever homogenizing global supermarkets, the desire for individuality cannot but take the form of anxiety, followed either by a fleeting satisfaction, or more likely, by a big disappointment.  It’s okay, though, because, while cosmopolitan shopping in global supermarkets might be tedious, the spectacle of someone else doing the tedious cosmopolitan shopping can be pleasurable, creating the “drama and fantasy” of global consumption itself.  This inherent ambivalence, embodied in Johnson’s consistently blasé attitude, sets a model for the 21st century cosmopolitan, the stylistically world-weary, which is arguably the primary source of fascination for Man Shops Globe.