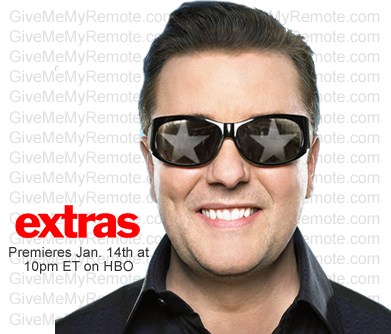 In the hit BBC-HBO co-production Extras’ Christmas special finale, Ricky Gervais’ character Andy Millman has a moment of self-realisation about the value of his ‘celebrity’ status. Having apparently ‘made it’ as a ‘TV star’, Millman is now out of work after quitting his successful, but catch-phrase driven, When the Whistle Blows sitcom.1 Despite complaining that this has made him famous with the ‘wrong audience’ by ‘shouting a catch phrase to a bunch of morons’, Millman finds himself desperate for the fame and attention that this success has granted him and has subsequently agreed to appear in Celebrity Big Brother. Stuck in a D-List celebrity hell, Millman has a (long overdue) epiphany. Sitting on the couch and surrounded by his fellow ‘celebs’, Millman launches into a scathing monologue on the ills of modern fame. Delivered predominantly in television’s familiar mid-close-up to the house ‘CCTV’ cameras, Millman directly addresses the watching home audience: both ‘us’—the viewers of Extras—and those in the narrative world of the program, represented here by Millman’s best friend Maggie. 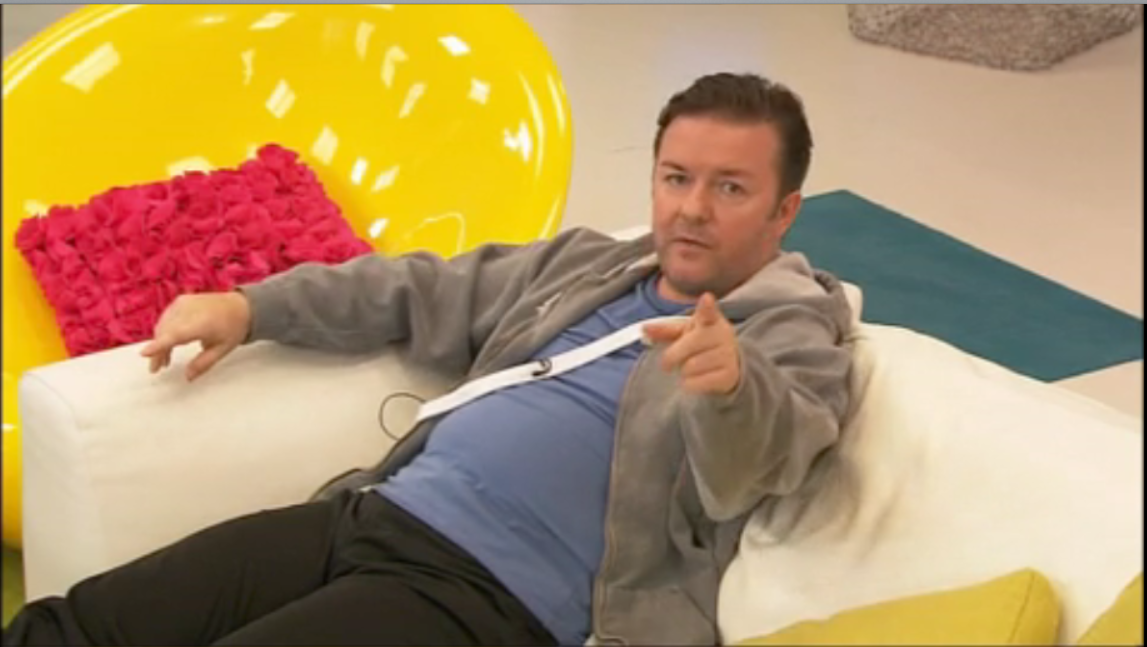 Millman (Gervais) directly addresses both the audience and Maggie

Declaring that the ‘Victorian freak show never went away’ he suggests it is now simply called ‘Big Brother or X Factor’2 where ‘we wheel out the bewildered to be sniggered at by multimillionaires’, before going on to insist that the producers, audience and he himself should all be ashamed of their part in this culture. Millman’s vitriol becomes primarily aimed at himself, because ‘I’m the worst of all … one of those people that goes “Oooh, I’m an entertainer, it’s in my blood”. Yeah it’s in my blood cause a real job’s too hard … So I go “it’s what I do”’.

Millman’s diatribe, its narcissistic self loathing and setting in the Big Brother house, draws our attention to one of the central ways in which television fame, particularly its conveyor belt production of reality TV ‘stars’, produces celebrity and its resultant value: that is, television fame is premised on people appearing ‘just-as-they-are’, without any extraordinary talent, and/or the revelation (and commoditisation) of the authentic self. This has been termed television’s ‘personality effect’, whereby the medium’s rhetoric of familiarity and intimacy, combined with the domestic context of its reception, are said to mitigate against the paradoxical and enigmatic construction of cinematic stardom as understood in film scholarship. This dichotomy between film and television stardom has functioned largely to devalue television fame, whilst the emergence of reality TV has tended to cement this hierarchy by associating television inextricably with what many perceive as a cultural decline in the value of celebrity. Yet it is precisely the impossibility of these distinctions, and the subsequent play with notions of celebrities’ on-/off-screen, ordinary/extraordinary self where much of the humour in Extras, and its satirical edge, comes from.

Extras is of course premised on the cameos of the film stars, television personalities, TV actors, pop stars and the plethora of other celebrities, who appear in each episode as a parodic version of their intertextual celebrity persona. In particular, the series has exploited our ‘ongoing fascination with how big screen stars will appear (and whether they will be “different”) on the small screen’.3 Thus stars such as Kate Winslet, Samuel Jackson and Ben Stiller make appearances that play-up specific aspects of their personas. Whilst obviously played for comic effect, this ‘playing oneself’ is precisely what has been criticised in describing the hallmarks of television’s register of fame, setting it apart from, and inferior to, cinema. Yet such film stars’ appearance alongside a plethora of British television personalities who are also ‘playing themselves’ (from Shaun Williamson’s persona as ‘Barry off EastEnders’ to Les Dennis’ washed up variety show host) demonstrates how the series foregrounds the diverse forms of television fame that have coagulated under the derisory catch all ‘television personality’ distinction. But it also emphasises how the perceived specificities of television fame are primarily evaluative: whilst ‘ordinariness’ and ‘authenticity’ are often qualities praised in relation to stars, being ‘oneself’ has hardly been applauded as a skill in reality television or presentational modes of television more generally. 4

Some may respond that such a comparison is unhelpful in a discussion of Extras when the program works on a register somewhere between pastiche and parody. But, as Richard Dyer’s study of pastiche has suggested, it is precisely in such play that affect can be generated so as to ‘move us even while allowing us to be conscious of where the means of our being moved come from.’5 Thus to return to the moment from Extras I have been discussing, Gervais’ performance as Millman draws our attention to the way ‘ordinary’ people, such as BB contestants, have become more adept at managing a performance under the aesthetics of surveillance that characterises reality television via his use of direct address.6 In so doing, the performative nature of authenticity in television fame, which has been greatly prized in reality TV, is also exposed.7

Thus through gesture Millman makes us aware of the range of cameras filming the sequence, but then focuses his performance on one which, via its acute angle, emphasises reality TV’s ‘fly on the wall’ aesthetic as he builds towards his crescendo. 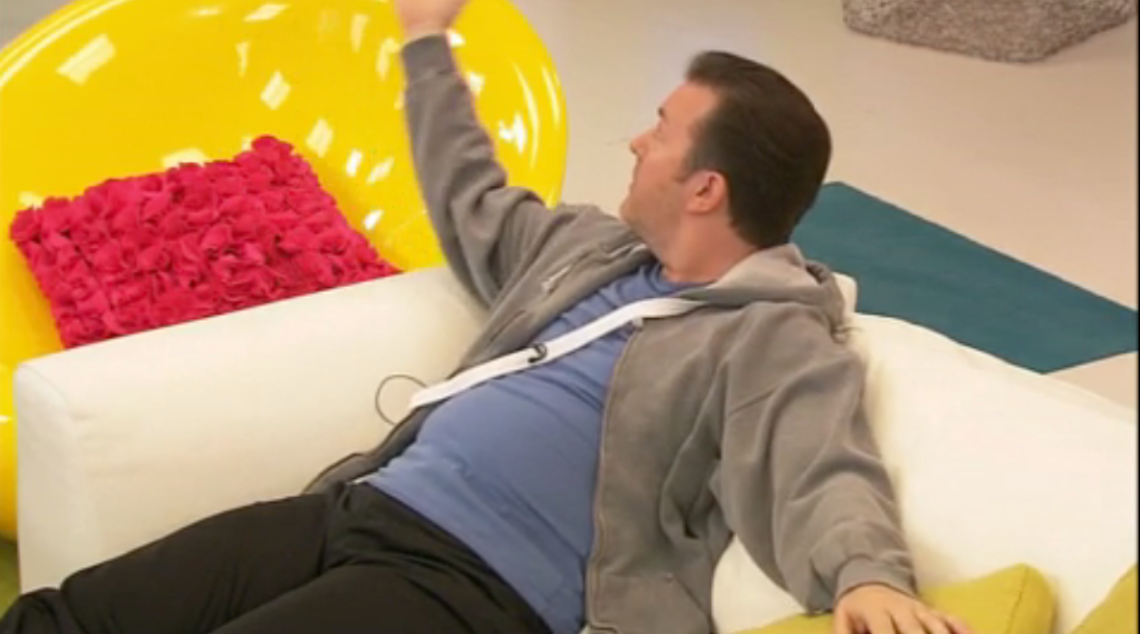 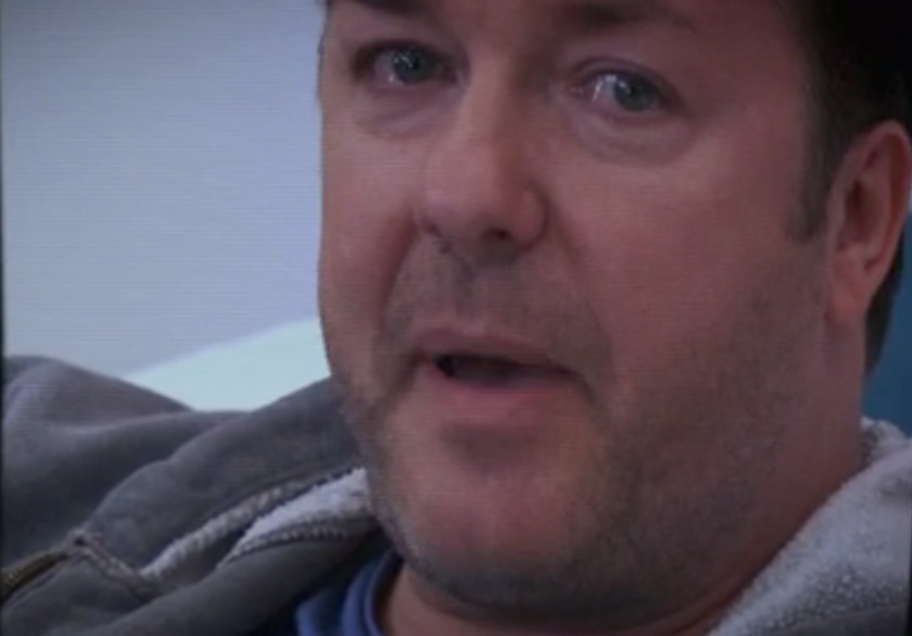 …and then directly addresses the audience.

This takes the form of Millman answering a stupid question Maggie had asked earlier about being a flying fish or a penguin. Choosing the latter to quite surprising comic and emotional effect, Millman is able to reveal his true, authentic, self and finally find validation in the ‘right’ audience: Maggie. However this ‘authentic’ self is immediately perceived by a fellow housemate as an ‘amazing’ performance, whicih can be rewarded in the form of commoditisation. Thus she seizes on Millman’s announcement that he’s leaving the BB house to try and come with him, ‘just give me 5 minutes, there’s paparazzi out there, I’ll put on a bikini’.

There are a number of layers at work here. Gervais’ performance as Millman is directed at us the home viewer of Extras, whilst the sentimentality of the monologue is heightened and permitted by its narrative address to Maggie. This allows for an emotional closure to the series’ finale that Extras’ register of pastiche might otherwise have precluded, but it does so by again playing with the notion that celebrities can have authentic, and distinct, on-/off-screen selves. In turn, the relationship between the Millman character and Gervais persona is raised. In a Flow column on The Office, a follow up comment posits Millman as an extension of the Brent persona Gervais established there, suggesting that Extras similarly places a priority on friendship over fleeting fame in determining the meaning of ‘success’.8 Whilst this appears to be confirmed by the ending of the series—which sees Gervais’ character refuse the de-valued currency gained as a celebrity Reality TV contestant and instead drive off into the sunset with his best friend Maggie—such a comment is also suggestive of the continuousness of persona associated with television fame’s elision of on-/off- screen self. Indeed, Gervais has described Extras as his ‘study of fame years’,9 admitting the diatribe on celebrity discussed here didn’t involve ‘a huge veil of character … That was me’.10

To a large extent, the series works on the premise that it is poking fun at the excesses and self-aggrandisement of stardom’s ‘extraordinariness’. However, it does so at the same time as conferring this success on Gervais. Thus as the curtain closes on Extras, Millman sets out in search of a place where ‘no one knows me’, to which Maggie sarcastically offers the possibility of ‘Hollywood?’ Of course, this is where Gervais himself has headed in search of the legitimisation, and financial reward of Hollywood stardom. This suggests that, like the devalued audience Millman finds his fame amongst via the success of a derivative TV sitcom, ‘stardom proper’ for Gervais remains a quality to be conferred by cinema.

I, for one however, hope that Gervais is quickly returned to the ‘mire’ of telly fame. For Gervais is perhaps one of the few bona fide ‘television stars’11 whose fame is based on the successful manipulation of television aesthetics, techniques, performance modes and the fame it confers on the ‘authentic’ self. Gervais’ fame therefore draws our attention to the way cultural hierarchies devalue TV fame and deflect our attention from its possibilities.