Sportv: Beyond the Sport Event
Ben Goldsmith / University of Queensland 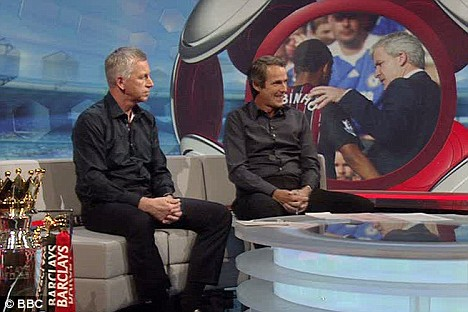 Match of the Day

This issue of Flow was prompted by a recognition that sports media has not to date attracted the kind of critical and scholarly attention that has been paid to other forms such as news, drama, soap operas, or reality television. The invitation to contribute highlighted a number of issues including fan experiences, sports in different media, social media and sports, the professional-amateur interface in content provision, and historical and contemporary discourses and representations of gender, race, class, sexuality, and ethnicity. All of these are important and worthy subjects in what is undoubtedly a woefully under-studied area. And yet all of these suggested topics focus on the sports event, with the implicit assumption that ‘sports media’ equates exactly to coverage and discussion of sports events, no more, no less. In this brief article I want to question this assumption, to open up the category of ‘sports media’ – and more precisely, sports television – to explore the diverse range of sports-related programming and content that has been almost completely overlooked by scholars of the media, and television studies in particular. I call this range of content ‘sportv’, and I argue that far from being marginal or invisible, it is a quintessential form of television. ‘Sportv’ includes but is by no means restricted to event coverage.

In one of the few scholarly engagements with sports television beyond the sports event, Garry Whannel identifies a variety of program types which he lumps together under the heading ‘quasi-sport’.1 These include sports events involving celebrities, such as pro-celebrity golf tournaments; programs in which sports stars do not play their usual sports, such as Superstars; programs involving celebrities and games, for which he gives the example Star Games; programs which utilise sports iconography and information, such as sports quizzes; and programs ‘involving the general public in games requiring a degree of physical skill’, such as It’s a Knockout/Jeux Sans Frontieres, or to give a contemporary example, Wipeout. Whannel notes that these programs typically blend elements of sports and ‘light entertainment’, and combine ‘elements of sport and entertainment in a competitive structure’.2 “The collective term ‘quasi-sport’ and the reference to these programs as hybrids of another much maligned program type, light entertainment, bolstered a dismissive attitude to these programs that has prevailed ever since. As ‘quasi-sport’, these programs are explicitly distinguished from and marked as inferior to sport, because they do not display or deploy the kind of “serious elite excellence” seen in television coverage of professional sports events.3 And they are rendered doubly inferior via the connection to light entertainment, a British programming term used to distinguish between ‘serious’ programming (such as drama, news and sports event coverage) and trivial, frivolous or light-weight ‘entertainment’ programming such as comedy, variety, quiz, game and chat shows.4
Perhaps unconsciously, television scholarship has endorsed this negative and dismissive characterisation of sportv, preferring instead more worthy or critically satisfying objects. 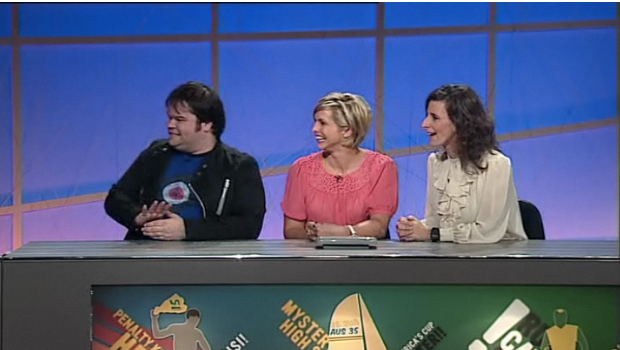 Given that television scheduling around the world now routinely includes not only sports event coverage but also an increasing volume and diversity of sports-related or –themed programming, the time has well and truly come for a critical examination of sportv. In the remainder of this article, I want to sketch an outline of a new typology of sportv, drawing primarily on Australian, British and American programs as examples. I have watched television in a number of countries, but I have not (yet) engaged in a thoroughgoing international study of sportv, and so although I cannot say for certain, my working hypothesis is that sportv contains iconography, elements and types that will be recognisable in other television environments alongside some locally or nationally-specific elements and types.

A Tentative Typology of Sportv

Wraparound sportv envelops actuality sports television. This type consists of pre-event introductions and interviews, commentary including special comments, mid-game analysis, post-game highlights and on-ground interviews. Wraparound, along with actuality, is the most common type of sportv. Together with replays of old matches, wraparound sportv makes up almost all of the content of the dedicated club channels that are becoming increasingly common at the highest level of association football, or soccer.5 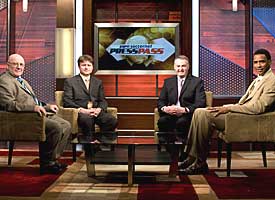 Newsportv, like panel sportv, is closely related to wraparound. Newsportv draws on the conventions of news coverage, and contains two main types. Like Panel sportv, newsportv is closely related to wraparound. The first, typified by the Eurosportsnews 24 hour sports news channel, consists of a rolling sequence of short news items, often highlights, introduced and connected by a voiceover (allowing for multi-language versions) rather than an on-screen presenter. The second type of newsportv, exemplified by Sky Sports News in the UK, Fox Sports News in Australia, and ESPN’s Sport Center, is typically filmed in a studio, involves one or more on-screen presenters reading sports news from an autocue, introducing short reports, and providing live voiceover for highlights. Presenters usually sit at a desk, addressing the viewer directly, in front of a backdrop of a working newsroom, or a bank of screens. In common with news channels, newsportv channels typically include a number of idents and visual information streams such as a scrolling text bar at the bottom of the screen that relays results and news, often repeating (though on a different timer) the visual highlights onscreen. Male presenters, like male newsreaders, will typically wear a jacket or sports coat, and a tie. In its division of categories of sports programs, ESPN makes a far from hard-and-fast distinction between “Talk and Debate” and “News and Analysis” shows. The two forms bleed easily into each other.

Panel sportv is a flexible and resilient television form dating back to the medium’s earliest days. The panel of sports pundits, often current or former professional sports players, journalists and commentators, and often led or hosted by a sports journalist or network star, can itself form the basis of a show or, in combination with newsportv, sportvariety and television sports segments can be part of a longer program. This latter hybrid form was the basis of the long-running Australian sports program World of Sport which screened on Sunday lunchtimes from 1959 to 1987, and The Footy Show, which screens in two versions reflecting the now somewhat anachronistic geographical division between rugby league and Australian rules football in Australia. Panel sportv is typically studio-based, and features an ‘expert panel’, seated at a presentation table (NRL on Fox), or on a raised podium arranged in a semi-circle in chairs (ESPN Soccernet Press Pass), in armchairs or couches around a coffee table (On the Couch, The Offsiders, Match of the Day), with a backdrop including colourful flats in abstract designs (often related to the particular topic sport), and the ubiquitous large screen or bank of screens that panellists and presenters do not watch, preferring instead monitors hidden out of camera view. This form has been adapted by ESPN through the use of the ‘celebrity squares’ bank of monitors linking panellists in studios across the US with the host in Around the Horn. Sky Sports (UK’s) Soccer Saturday is a hybrid of newsportv and panel sportv in which former footballers in the studio view and report live on matches in progress which they, unlike the everyday viewer because of licensing and technological restrictions, are able to watch on monitors embedded in the desk in front of them. Sports quiz programs such as the British A Question of Sport, the Australian The Squiz and New Zealand’s Game of 2 Halves might be considered variants of panel sportv.6 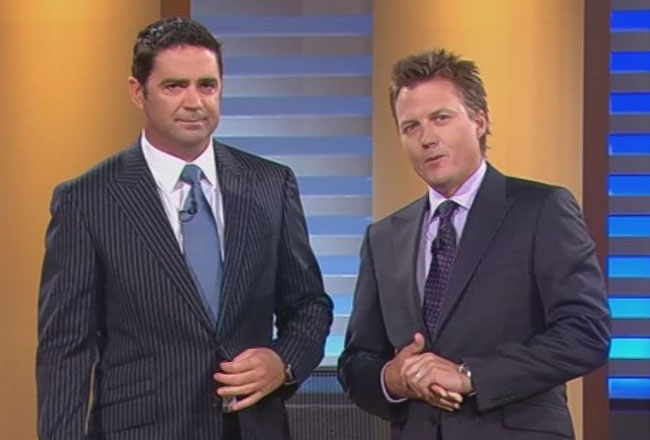 Sportvariety is magazine television, comprising a series of short segments that may include news; expert commentary; light-hearted interviews; clips of sports events usually chosen for comic value rather than as highlights of significant moments; sports-themed contests which may be based on real sports or invented (as in telesportv, below) involving sports professionals, celebrities and ordinary people; sports stars in unusual locations or situations, as in the enormously popular New Zealand series starring two former rugby players Matthew and Marc’s Rocky Road to… Leading examples of the sportvariety form include Australia’s The Footy Show (based on panel sportv) and the UK’s Soccer AM (a much looser, studio-based production), both of which are filmed in front of live and raucous studio audiences wearing their club colours.7

Reality sportv encompasses sport-themed reality television programs, including the growing number of sports talent scout shows such as Super Soccer Star, Football’s Next Star and Wayne Rooney’s Street Striker. Other examples include the Scandinavian format FC Nerds in which a group of people chosen for their lack of sporting aptitude are trained to become a football team and ultimately to play against a professional side.

Telesportv includes sports events staged for television such as pro-celebrity tournaments; programs in which sports stars or celebrities compete in multiple sports, such as Superstars or the Belgian variant Eternal Glory8 ; adaptations of existing sports, such as ESPN’s X Games, or sports and physical competitions invented for television, such as Gladiators, Wok World Championships (invented by German television host Stefan Raab, in which individuals and teams descend a bobsleigh run in a wok), World’s Strongest Man, Wipeout or Survivor. Typically these programs are sports-like in that they involve contestants wearing special costumes or uniforms undertaking physical challenges or tests of physical skill, to a set of rules, with the adjudication of referees or umpires, and a scoring system determining winner(s) and loser(s). The invented sports also deploy sports television’s architecture of interpretation: introduced or framed by a compere or host, with action interpreted and relayed by a commentator and special comments team, slow motion replays, and interviews with winners and losers.

As this brief, and evolving, overview has shown, sportv is a broad field that includes a variety of original and hybrid program types. It is also a form of programming that is fundamentally and increasingly important in contemporary television markets around the world, as evidenced by the announcement in September 2008 that one of the most successful format producers, Endemol, was establishing a sports division, and by the fact that IMG Sports Media is the second largest television distributor in the UK and a leading exporter of sports programming. While I have only been able to begin to sketch the outline of sportv in this short piece, it should be clear that sportv deserves another look.

Ben Goldsmith is a researcher at the Australian Film, Television and Radio School, and a research fellow at the University of Queensland. He is currently working on several collaborative research projects, on topics that include the transformation of film and television production in Australia since the introduction of subscription television; an exploration of the future of television using scenario planning methodologies; and a history of television ratings in the US, UK and Australia.