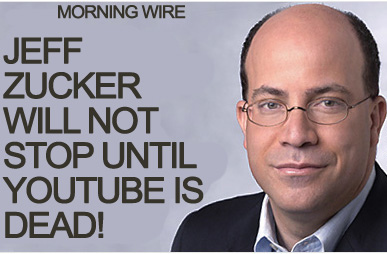 NOWHERE IS THE CLASH between big media and the new social media, between the dominant classes and the unwashed masses, between the traditional culture industry and the new, participatory culture associated with the Internet more evident than in the Draconian effort by NBC Universal CEO Jeff Zucker to bring down Google-owned YouTube—the populist home of mixed media mash-ups and amateur, user-generated content—and replace it with big-budget, copyrighted, mass media content on the multi-network owned and operated Hulu.com. Signaling what Barry Diller has characterized as the “creative chaos” of the moment, the photo mash-up at the top of the page uses a mixture of old and new media to portray the battle between YouTube and NBC using mythic imagery borrowed from pop culture.1 Star Wars evil emperor Darth Sideous, standing in for NBC, attacks an innocent-looking Steven Chen, the co-creator of YouTube. This overlapping of fictional and real life characters personifies the way that many avid fans adapt mainstream popular culture to serve their own ends—in this case, generating a form of activism that targets big media leaders for restricting users’ unfettered access to the Web.

YouTube’s “broadcast yourself” motto signals a new era of production, marketing, and distribution that functions under the radar of big media. By ignoring the backlash that emerged on the blogosphere after NBC, Fox, and Viacom tried to shut down YouTube, the verticals are not only alienating their core audience—the Net generation—but also preventing themselves from envisioning a new business model that embraces rather than shuns the untapped volume of users zealously engaging media on YouTube. 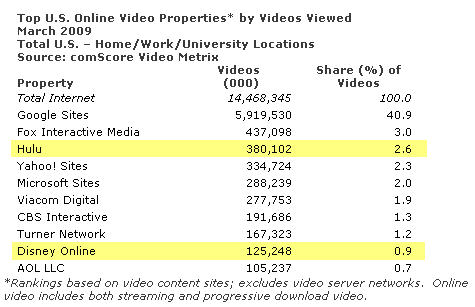 As recently as 2007, NBC’s Chief Marketing Officer John Miller was still engaged in a series of intriguing conversations with YouTube about partnering with the user-generated content giant after the famous SNL skit “Lazy Sunday” went viral on YouTube without NBC’s permission. However, Zucker fired back that “YouTube was built on the back of our ‘Lazy Sunday’ SNL video. Sold for $1.6 billion, built on our equity.”2 Zucker’s outrage prompted NBC to join forces with Fox to create Hulu.com.3 Viacom, Fox, and most recently Disney, have also filed suits against YouTube and are closing ranks by joining Hulu.com. 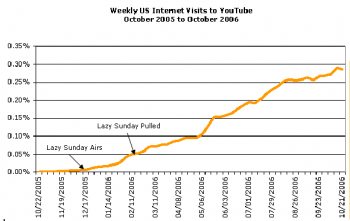 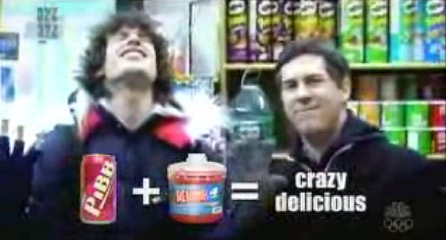 …Was it SNL’s Lazy Sunday?

One of the biggest challenges YouTube faces is advertisers’ steadfast adherence to the old-fashioned logic of mass media ownership.4 Even though Hulu has only 2 percent of YouTube’s volume of users, Hulu has outpaced YouTube in ad sales. While advertisers are eager to sponsor Hulu’s copyright-protected, professional content, YouTube has only been able to sell ads on less than 3% of its predominantly user generated content. It is this divide that is shaping the future of video streaming in favor of the “verticals.” For instance, within a year of its launch date in October 2007, Hulu had already landed “big-ad-budget consumer brands like Dove” for ABC’s short-lived J.J. Abrams series, What About Brian, and NBC was able to land the big-ad-budget Nissan account for Heroes.((Ibid)) In contrast, Znet’s Larry Dignan coyly observes: “Finding the business model for YouTube has become a bit of a parlor game these days.”5 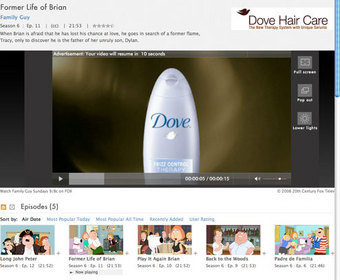 THE UNSPOKEN THREAT TO CORPORATE CULTURE posed by the unfiltered world of the Web is the ability of individual consumers to take on big media leaders mano-a-mano via the blogosphere. As NMS president Peter Snyder warns, “A single disgruntled consumer with a modem can now go toe to toe with Coca-Cola,” he says.6 “Ten years ago, what was he going to do? Harass some poor secretary?” Snyder continues, “Through user-generated content, you can use blogs, message boards, and chat rooms to voice your opinion to the top brass. And your views will be there, living forever online for everyone to see.”7 Media scholars Bernard Cova, Robert V. Kozinets, and Avi Shankar describe this new type of engaged and sometimes rebellious audience as a “consumer tribe.” They write:

Active and enthusiastic in their consumption, sometimes in the extreme, [consumer] tribes produce a range of identities, practices, rituals, meanings, and even material culture itself. They re-script roles, twist meanings, and shout back to producers and other groups of people while they fashion their own differentiation strategies. They both absorb and resist the pre-packaged, off-the-shelf, brand-and-product meanings of marketers.((Bernard Cova, Robert V. Kozinets, and Avi Shankar, eds., Consumer Tribes (Oxford: Buttworth-Heinemann, 2007), 4.))

In a previous essay, I focused on the efforts by the mainstream press, the trades, and NBC’s corporate public relations departments to invoke a cohesive vision of Zucker’s top-down approach to the network’s digital future. This “official” version of NBC’s policy stands in stark contrast to the unofficial, bottom-up, industry-savvy blogs like Defamer, Media Wire Daily, Jossip, and the Huffington Post, where Zucker and former NBC President Ben Silverman are routinely parodied.8 For instance, MediaWire Daily’s editor Shomari Hines writes, “NBC Uni and News Corp moving forward with their Youtube killer!” Next, he challenges the Los Angeles Times for its celebration of Hulu.com as “an advertiser-friendly destination” for NBC’s Heroes and The Office, and Fox’s Family Guy and 24.”9 These blogs offer an alternative means for media scholars and media insiders alike to imagine a new future for entertainment by moving past “official” statements to consider the growing discontent being voiced by large numbers of citizen journalists, who are actively challenging the unquestioned dominance of entertainment by the big six media industries.

BY WAY OF CONCLUSION, this brief exploration of the blogosphere’s unofficial response to the “NBC vs. YouTube” lawsuit demonstrates how difficult it will be for big media players like NBC to put the genie back in the bottle; in other words, any efforts by NBC to dominate social media spaces like YouTube, My Space, Facebook, and Twitter will no doubt be accompanied by a populist outcry against a Draconian big media. Paradoxically, this populist backlash is also emerging in professionally-produced and distributed content, such as SNL’s digital short, “Natalie Raps.” Like the “Lazy Sunday” digital short that inaugurated Zucker’s lawsuit against YouTube, “Natalie Raps” challenges expectations on several fronts by having the attractive, diminutive actress channel her rebellious character from V for Vendetta to challenge Zucker’s authority by shouting obscenities at him.10 Even though NBC and Zucker successfully stopped YouTube from posting SNL’s “Lazy Sunday,” the populist agenda associated with the first short has migrated to “Natalie Raps”—a viral phenomenon that originated on the official, NBC owned and operated site Hulu.com. 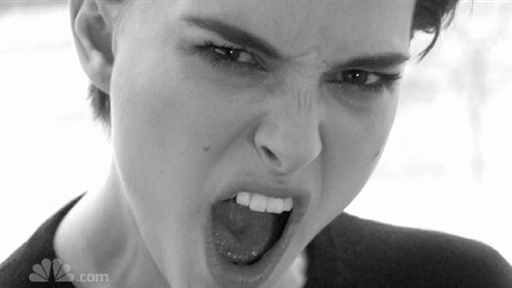 Seth Meyers: Damn Natalie ! You a crazy chick.
NP: Yo, shut the fuck up and SUCK MY DICK !!! I’m bustin’ dudes mouths like Gushers mothafucka ! Roll up on NBC and smack the shit out Jeff Zucker !!!