Cover image from the unofficial and unauthorized Lily Allen Remixed

While UK-based pop singer Lily Allen might not immediately come to mind as an anti-piracy evangelist, that’s exactly the mantle she took upon herself for a few weeks in September as she decried the plight of emerging UK artists and got behind proposed harsh anti-file sharing laws. As the three strikes laws—proposing that repeat file sharers be disconnected by their ISPs—were being debated in the press and parliament, Allen joined the fray initially blogging via her MySpace page1, and later posting on her own issue-specific blog called ‘It’s Not Alright’. However, rather than galvanizing public support, Allen’s own position soon became untenable as her own dubious relationship with copyright was revealed and she soon removed herself from the discussion altogether. Rather than simply positioning Lily Allen as one more greedy pop star, it’s worth considering in more depth why she was ultimately so confused about copyright and how that confusion—while technically criminal—is actually indicative of so many people, young and old, today.

In one of Allen’s first posts on her ‘It’s Not Alright’ blog, specifically set up to discuss file sharing issues, she criticized rapper 50 Cent who had claimed that far from harming album sales, if harnessed properly, file sharing could be used as a wide-ranging promotional tool to find new fans and thus make more sales. Although in a different medium, Allen’s point wasn’t helped by the fairly rapid discovery that the majority of the post about 50 Cent had been copied word for word2, without an indication or attribution of the source, from the TechDirt blog. Once pointed out, Allen did add attribution to the original article, but given the context, what might have been passed off as a simple mistake started to smack of hypocrisy.

And I am a weapon of massive consumption
And it’s not my fault it’s how I’m programmed to function
I’ll look at The Sun and I’ll look in The Mirror
I’m on the right track yeah we’re onto a winner
– Lily Allen, ‘The Fear’

In a similar vein, in Allen’s first MySpace blog post decrying illegal file sharing, she explicitly shot down the argument that file sharing allows potential customers to sample music, arguing that this was possibly okay when mix tapes and the like were analog and thus poorer quality, but that’s just not the case today. Unfortunately for her, a number of Allen’s fans recalled that earlier in her career she herself had posted high quality mp3 complication mix tapes of other artists’ music on her official EMI website. Even more embarrassingly, it turned out that those mix tapes were still online, a fact pounced upon by Mike Masnick on the TechDirt blog3, who pointed out that Lily Allen would surely have to be prosecuted under the proposed UK three strikes law (three alleged file sharing offenses and your ISP disconnects you) that she was promoting. Once again, the mixtapes disappeared fairly swiftly after they were shoved into the spotlight, but what was more interesting was Allen’s justification for posting them in the first place: “i made those mixtapes 5 years ago, i didn’t have a knowledge of the workings of the music industry back then…”4 If a lack on insider knowledge about the music industry is justification for file sharing, then wouldn’t most people accused of piracy be able to use this defense? 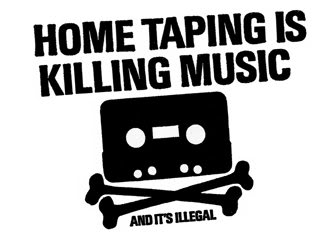 Before portraying Lily Allen as simply a copyright hypocrite, it’s worth pointing that in the past she’s been quite innovative about engaging and sharing with her fans. Indeed, Allen kick started her career by using MySpace to allow anyone to listen her songs for free, building a grassroots audience until that fan base grew large enough to help secure a recording contract. Allen has also encouraged fans to remix tracks from her current album, ‘It’s Not Me, It’s You.’ After purchasing the album, fans are entitled to download the individual elements of each track and create remixes they can share on Allen’s official EMI website.5 Sure, the Terms and Conditions of those remixes leave all creative rights to the original elements and the labor of fans in the hands of EMI 6, but the point here is that Allen is no stranger to remix and file sharing.

It’s this ambiguity which has led copyright commentators like Cory Doctorow7, and even TechDirt’s Mike Masnick8, to argue that rather than just vilifying Lily Allen, this series of copyright contradictions should be seen as a learning moment where some of the complexities of copyright law can be discussed and debated. Indeed, one of the most creative and productive responses to Allen’s initial posts was from amateur UK artist Dan Bull who responded cheekily by mixing a letter rebuking her with the instrumental version of her recent single ‘22’. After making his response mp3 available to download for free, Bull also posted a video version to YouTube which, to date, has received over a quarter of a million hits.

It’s never the amateurs that’s reckon it’s damaging us, it’s the major labels saying it’s fatal; like when Napster had to pack up, wrecked by Metallica. The table’s turned now – the labels churn out a new Jezebelinternetelevangelist – and she’s fit – with a manuscript that was actually written by Mr. Michael Masnick. Can you get the irony? And by the by, Lily, I like this beat – I hope you don’t mind me thieving, ’cause even doing a cover song’s decried as stealing. But it’s alright, still, for you to plagiarise, and preach it – Don’t you believe it’s maybe time to rethink, Lily?
– Dan Bull, ‘Dear Lily [an open letter to Lily Allen]’

Dan Bull’s call to ‘rethink’ the file sharing and copyright debates resonates far beyond Lily Allen’s foray into, and straight back out of, the debate; it’s a call which asks us all to examine a system which positions the vast majority of young people as copyright criminals. Like Lily Allen, their confusion is all too understandable. Meanwhile, rather than working to publicly address the ridiculous complexities of copyright rules dreamed up in an analog world trying to regulate a digital present, Allen, like so many others, has, for now, backed away in the face of a task which, while so important, seems so insurmountable…

I don’t know what’s right and what’s real anymore
And I don’t know how I’m meant to feel anymore
When do you think it will all become clear
Cause I’m being taken over by the fear
– Lily Allen, ‘The Fear’