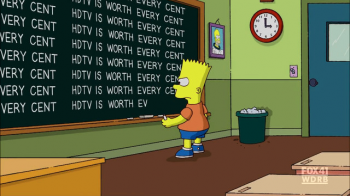 HDTV is Worth Every Cent

Having grown up with The Simpsons over the last twenty years, it’s easy to assume the show has a largely fixed, rather than dynamic meaning. Conventional wisdom poses that the show’s glory years are well behind it having peaked with Conan O’Brien’s stewardship in the early nineties. However, as the show continues to expand its boundaries (something that Jonathan Gray calls its extratextual “overflow”)1 we need to ask new questions of the series as it spills into other media industries, particularly with The Simpsons Movie, The Simpsons Video Game, The Simpsons Ride at Universal Studios Florida and the show’s conversion to the HDTV format in 2009.

As recent years have marked considerable corporate investment in The Simpsons brand by its News Corporation parent company – presently it occupies the opening 8pm time-slot in Fox’s “Animation Nation” Sunday night programming – it is necessary that we take another glance at the series, not only to assess its continual value as a satirical mirror of the absurdities of American life but also its increasing value as a corporate product. The Simpsons themselves might not age, but the show continues to evolve, having entered a new phase in the life of its brand identity with the advent of new technologies. Oh, and it’s still funny too.

The series’ recent conversion to the High Definition Television (and widescreen) format has given the 20 year-old show a major face-lift by updating its classic opening sequence. This change has two effects. First, it acts as a public record, documenting American Television’s conversion to digital and HD formats while following U.S. federal government mandates. Second, it retools the show to make way for more detailed animation, expanded storytelling and new jokes by utilizing the previously unused edges of the frame.

Far from simply adding a new hat to an old Malibu Stacy doll (as it were) the dynamic new opening raises several issues. For years, Pan and Scan (the process by which a film is converted to match the TV format) has butchered the outer edges of the movie frame for conversion to TV. It is also this process that is understood as the point of absolute difference between the two formats. Put simply, traditional TV resembles a square (The 4:3 ratio, such as the one that the Simpson family used to possess) while film is displayed in widened rectangle (16:9). Thus, The Simpsons’ conversion to HD might change the actual meaning of TV by rendering these differences problematic. Where we used to know that we were watching “TV” precisely because of the square format of the image, HDTVs’ resemblance to film, and its shared rectangular shape, poses us problems when looked to as differentiated products.

The Simpsons Movie identifies itself as a different product early on the film, reflexively shifting from the dimensions of TV to those of film in the opening moment.

(For my fellow international residents, who are blocked to hulu access portal, view the clip here)

As we can see in this clip, the familiar opening is changed from the outset, as the 4:3 ratio is immediately corrected by Professor Frink in his flying machine as he sings along to the familiar theme, adding “movie…on the big screen” and expanding the image from the standard TV dimensions to the widescreen format. The rest of the sequence can be seen as taking full advantage of the technological and visual superiority afforded in the movie theatre (as does the final credit sequence, which has us sitting in the theater with the Simpsons family as they comment on the names). This sequence also brings us through a sophisticated (nearly) three-dimensional version of Springfield, complete with the familiar settings of the town which literally pop-up and out at us in the opening minutes. The humor of the scene comes from its playfully familiar relationship to the TV show’s earlier sequence, providing us with Bart’s chalk-board writing “I will not download this film illegally” and ending with a stereo mix of Green Day’s version of the theme song. Moreover, it is almost as if this sequence highlights the superiority of film over TV by showing all of the things that TV couldn’t do.

With the advent of HD technology and the show’s shift to widescreen, these advantages have changed significantly. The Simpsons’ HD opening, which debuted on February 15th, 2009, pushes the theatrical version even further, taking full advantage of the expanded screen to reflexively comment on the action in the outer reaches of the 16:9 screen size. 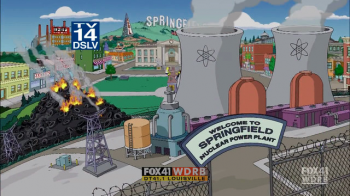 The first thing we notice is that this sequence more fully resembles The Simpsons Movie than its TV precursor. Plus, the animation far better than anything we’ve seen in the twenty-year-old sequence that we have doubtless watched countless times. We should note the transformation of the sequence to include action in the outer edges of the frame. The conceit here is that this action had always been taking place, but had been trimmed to accommodate the (Pan and Scan) demands of syndicated television.

Most shocking of all is the disappearance of the Simpsons’ beloved, rabbit-ears laden TV (was it a Magnetvox, a Fony?). The family, which has resisted almost every technological advance of the past twenty years (computers, cell phones, even cable TV) now has a flat, widescreen TV, haphazardly hung on the wall (by Homer himself no doubt) only to fall off at the end of the sequence. 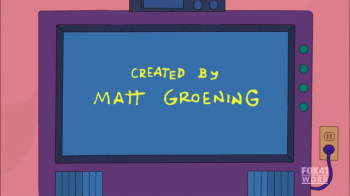 Widescreen TVs are abound throughout the sequence, perhaps reflecting Springfield’s gradual (and, indeed, federally-mandated) conversion to digital formats and the proliferation of wide screens in almost every public space (including bars, gyms, taxis, iphones) in the real world. This can most clearly be seen in a shot of Bart’s skateboard past a TV shop, where Krusty’s smile is marked on a pyramid of the now ubiquitous wide screen TVs. 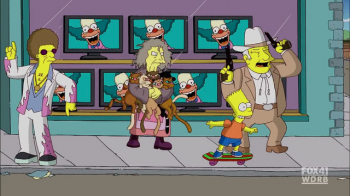 Bart, The Crazy Cat Lady and Krusty in Widescreen

A breakdown of the opening’s new contents reveal that it retroactively changes the meaning of the original by behaving as if someone had edited out details of the sequence that had always been there. These fixtures were seemingly omitted in the shift from an imagined widescreen version as it was converted from the 16:9 to 4:3 screen format. While this may seem like a slightly contentious statement at first, we need only look at the new features and camera movements in this new opening to see how this effect operates.

The familiar image of Homer working with the nuclear rod is our first cue, as the expanded frame shows Lenny and Carl on the extreme right, implying that they had been there all along but were excised to concentrate on the main action of Homer’s accident. 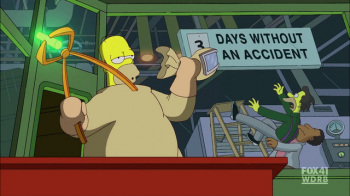 This effect occurs again in the grocery store with Marge and Maggie, as a subtle camera move reveals that Baby Gerald (Maggie’s unibrowed nemesis) had been there for her to shake her fist at him the entire time. 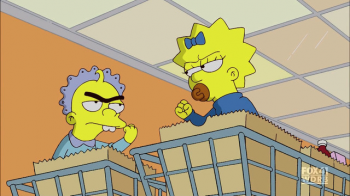 Finally, on the drive home, a previous punchline – Maggie driving the family car – is expanded to reveal that Grandpa Simpson was probably in the vehicle for the familiar journey. 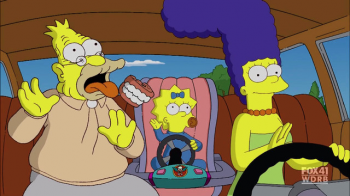 Without overstating the significance of this new opening, I hope that this analysis offers several questions worth following up on for future consideration.

The first of these asks whether the series’ (and more generally, television’s ) conversion to HD actually changes its ultimate meaning as it moves from the 4:3 to 16:9 formats. I think that it’s fair to say that The Simpsons‘ new opening effectively asks this question by placing restaging familiar action but by enhancing it with the edges of the frame. Thus, by deliberately utilizing the new aesthetics of HD the sequence foregrounds these concerns (in the form of Bart’s chalkboard scrawl “HDTV is worth every cent”) in addition to the proliferation of (wide) screens throughout.

Interestingly, the sequence performs the function of advertising the technology by demonstrating the format’s expanded capacity to show a better image and make better use of screen space. The “HD-ness” of the opening serves a similar role as the best selling Blu-Ray and HDTV DVD series Planet Earth – it sells the technology of better picture and sound while employing the new features that the new technology affords. Both are great selling points for new TV buyers.

That the jokes of the new sequence are all dependent on the outer-edges of the frame in relation to the all-too-familiar older sequence is further evidence that specific changes are taking place. The sequence’s expanded length and diversity (in some episodes it is nearly three minutes long) and content speaks to a larger understanding of the series’ continued innovation at televisions’ literal and figurative boundaries.

Following Jonathan Gray’s important work on the show’s boundary spillage (and textual excess) into video games and postage stamps, we might see the series’ expansion in the past three years – first to the movie screen (The Simpsons Movie, 2007) then to rides and into the expansion of the TVs frame – as accommodating the federally-mandated conversion to digital while expanding to create new cultural meanings in an increasingly confusing era of TV/Film/Videogame/Theme Park convergence.

Perhaps we can view The Simpsons’ continuing expansion across media industries as a test case for understanding how media empires work by investigating one of its most stable, informative and entertaining artifacts. The show’s ongoing employment of new technologies and integration into newer media industries such as movies, videogames, theme park rides and HDTV formats force us to ask questions about what the franchise, and ultimately whether series’ meaning actually changes with its incorporation of these innovations.

And while we’re at it, we should probably stop to enjoy the series, as this new corporate investment equals crisper animation, stronger writing, biting satire and better access across media industries than ever before. Thus, to borrow a phrase from Gray, we’re no longer merely “Watching with The Simpsons” but enjoying the experiences of playing with them, riding with them and experiencing new technologies with them as well.