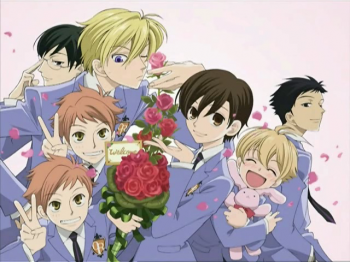 Haruhi and her fellow hosts

Shōjo, as a cultural term, refers to both the targeted market, girls generally aged from 7-18, and to modes of aesthetics and narratives aimed at female viewers/readers. Until ten years ago, most of the anime titles released in the U.S. can generally be described as “male-oriented” fare. However, in recent years, U.S. anime distributors such as Pioneer, Funimation, etc, have begun to introduce new subgenres to a specifically female market. Firstly, I assert that some shōjo subgenres can be read discursively, as a category that is as much defined by its discontinuities as by its regularities. Shōjo narratives are not uniform in theme or structure, and include, but are not limited to, typically heteronormative storylines. However, I wish to focus on smaller subsets of shōjo, of particular importance will be the subgenre of cross-dressing narratives, to illustrate the flexibility of shōjo and possible new perspectives on gender identities and sexual desires.

The aim of this essay is to examine the trans-cultural movement, known as “shōjo” and how it opens possibilities for freedom from gender binaries and articulates multiple feminine (and sometimes masculine) sexualities. Recently, shōjo anime and manga culture has been gaining immense popularity in the U.S. According to the Japan External Trade Organization website, despite a slight decline in anime sales, manga sales have been steadily increasing. A contributing factor has been the introduction of shōjo-oriented manga and a subsequent increase of female consumers; “It is interesting to note, that the popularity of titles such as Fruits Basket indicates that there are significant numbers of teenage girls purchasing manga.”1 Also to note is the recent increase of Yaoi titles, a shōjo subgenre, written by women for female fans; “There are about 325 individual BL manga or novel titles that have been announced as licensed in the U.S., totaling about 600 individual books.”2 Yaoi’s recent popularity has also gained much scholarly attention.3 I will first investigate a Japanese historical context of shōjo anime/manga primarily as a method of illustrating that shōjo represents a set of texts that demonstrate narrative complexity and offer alternative identificatory possibilities for female fandom unlike the typically heteronormative fare offered in the U.S. 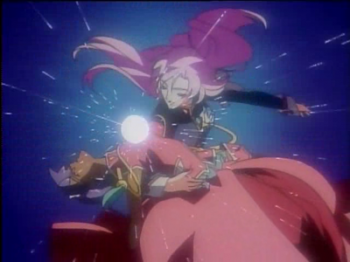 Revolutionary Girl Utena in many senses of the word.

Anime and manga share the cross-dressing shōjo tradition with the Takarazuka theater troupe, even resulting in intertextual adaptations.4 Jennifer Robertson’s article5 on the Takarazuka Revue offers an intricate history of the all female theater movement formed in 1910. The Takarazuka produce romantic plays that specialize in “masculinist imagination”, in other words, heteronormative, and has a fandom that is comprised of mainly females. Her analysis aligns with cross-dressing shōjo anime/manga in three ways: First, they are both geared toward the same intended audience, teenage girls to adult women who are invested in these romantic narratives. Second, the presence of a female lead in male guise automatically de-centers the heteronormative paradigm as a priori knowledge necessarily reminds the view/reader of the character/actor’s biological gender. Three, both theatrical production and the medium of animation offer a space whose primary goal is to cater to and articulate desire. Due to the brevity of this piece, here I will shift focus from issues of the theater and theatricality towards an emphasis on animation as a medium. 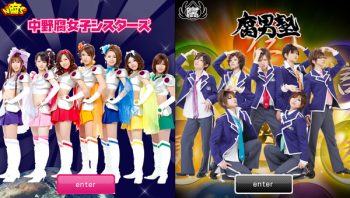 Ouran High School Host Club, a recently popular series is a prime example. The primary female protagonist, Haruhi, agrees to cross-dress as a male host and entertain girls at their prestigious high school in order to pay for an expensive broken antique vase. Ouran Host Club is essentially a comedy/romance, but also performs a parodic version of heteronormative narratives. As a “reverse-harem” trope, Haruhi is surrounded by beautiful boys, some of which eventually admit romantic feelings for her. However, Haruhi, an atypical shōjo heroine, is generally unimpressed by their over-the-top, unnecessary romantic gestures. She is also generally unconcerned with gender performance, and has no problem donning a male uniform and charming girls, performing a popular shōjo archetype; the “princely, effeminate male.”6 Haruhi’s character identifies that gender is socially constructed, perhaps due to her upbringing; her father is a transvestite, and her deceased mother was a popular otokoyaku (actress who specializes in male gender performance) in a Takarazuka-like troupe in an all-girls high school, a humorous intertextual allusion to the all-female theatrical tradition.

Susan Napier attributes anime as having a “visual flexibility” and states that it has an “ability to transform figures, shapes, and even space itself.”7 Napier utilizes Bakhtin’s carnivalesque to analyze anime romantic comedy, but her discussion is predominantly concerned with the magical girlfriend genre.8 I argue that Bakhtin’s theory of the carnivalesque can be more usefully posited specifically towards upsetting hierarchies and political re-positioning. Bakhtin writes that the festival more accurately represents a “consecration of inequality”, whereas “on the contrary, all were considered equal during carnival. Here, in the town square, a special form of free and familiar contact reigned among people who were usually divided by barriers of caste, property, profession, and age…People were, so to speak, reborn for new, purely human relations.” 9 The fantastic flexibility of anime/manga, simulates the chronotope (time/space) of the [medieval] carnival/marketplace. This concept is especially pertinent when combined with the practices of inverting gender norms through gendered performances. Cross-dressing shōjo narratives align with ideals of the carnivalesque because “clothing is the means to, and even the substance of, the character’s commutable gender…The alternative subtextual meaning of this play is that gender as performance undercuts the ideological fixity of received gender differences,” 10 as a method of subverting patriarchal hierarchy.

Jennifer Robertson also points to the etymology of the term shōjo as referring to “unmarried girls and women…which means, literally, a ‘not-quite-female’ female”. She also writes that “Shōjo also implies heterosexual inexperience and homosexual experience.”11 To elaborate, her claim means that typical shōjo work features a heroine who hasn’t yet entered into a heterosexual sexual relationship, whereas homosexual shōjo storylines are not as strictly chaste, such as in genres like Yaoi.12 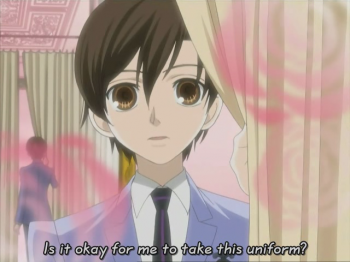 Ouran cleverly parodies many of the more far-fetched and dramatic aspects of some other popular shōjo anime/manga/theatrical traditions, but also lapses into moments of sincere emotionality, which both maintain the “masculinist fantasy”, Haruhi being uncharacteristically impressed with a “sincere” emotion from one of her many possible male suitors, and also constructs a dual reading of Haruhi as the otokoyaku, as she engenders a third possibility as an androgynous heroic ideal over her ridiculously type casted host club members. Haruhi, in this sense, represents the romantic ideal, as being “more” than male than the male characters can be because she is also female. However, it adheres to Robertson’s form that while Haruhi is the receiver of both homosexual and heterosexual desire within the series, she is ultimately sexually inactive. This therefore maintains an open text that allows for simultaneous multi-layered interpretations of an audience’s desire: Haruhi’s female-as-male host performance, her female-to-female romantic interactions, the homosexual subtext of her romantic interactions with the other club members while she’s engendering a host, or as heterosexual fantasy once they’ve discovered her biological sex as female underneath her masculine guise.

“How to be a Host” Clip from Episode 2 of Ouran Host Club. Haruhi argues about for using masculine gendered language but resists attending a ball.

Robertson points out that while the Revue “continues to uphold the dominant ideal of heterosexuality” it also simultaneously “inform[s] a lesbian subcultural style”.13 This also holds true for certain subgenres of anime and manga, and to further it, shōjo can also be associated with male homoerotic relationships as well. Shōjo, as a category, is a space that is more characteristic of possibilities rather than limitations, and has found a burgeoning fan base in the U.S. female market. Shōjo texts are, above all, concerned with articulating and fulfilling desire and are categorically unique in exploring many manifestations of said desire, instead of strictly maintaining a heteronormative status quo, and judging by the response of U.S. shōjo market, female fans are ready for new ideas.