When I first walked into Game Unicon, a videogame convention held last month in an off-the-highway hotel deep in the Boston suburbs, I wasn’t sure whether I was relieved or disappointed at the absence of the much-advertised booth babes. It was mid-day on a Friday, and the convention was just getting rolling; maybe the babes showed up later in the weekend. In any case, once I entered the crowded conference room devoted to Guitar Hero and Rock Band, women were few and far between. A couple of moms came to watch their sons compete, but during my visit there were no female players. The vast majority of players were white teenaged boys, some looking as young as 11 or 12—a very different crowd from the players I encountered during my Rock Band fieldwork in Boston bars. There were cash prizes in the offing, but apparently they weren’t high enough to entice many adult players to take a day off from work.

Many of the players were clad in black t-shirts advertising metal bands whose songs are featured in the Rock Band games. Mastodon and Cannibal Corpse were popular options; Mastodon’s “Colony of Birchmen” is part of the on-disc repertoire in Rock Band 2, while Cannibal Corpse’s “Hammer Smashed Face” is available as downloadable content for an additional fee. In the age of digital discovery1 and media convergence2, it’s quite likely that these young players discovered the music through the games rather than experiencing it as listeners first—though of course the available musical repertoire also drives sales of the games (see The Beatles: Rock Band).

I was at the convention for the Rock Band individual instrument tournaments on guitar and drums. When I arrived, people were crowded around five gaming stations set up around the perimeter of the room. The guitar finals were in progress on some stations; at others, players were warming up for the drum tournament. The room was filled with the clacking of fret buttons and strum bars and the dull thump of drum heads. The game music on each TV was turned fairly low, so that only the players directly in front of the speakers had much chance of hearing it. Here’s a YouTube video someone shot of the room:

Players were required to bring their own instrument controllers; plastic guitars leaned against the walls and a fleet of drum kits waited in a corner. Players with modified kick-drum pedals showed off their equipment and invited others to try out their kits (in some cases offering to sell their work after the convention). 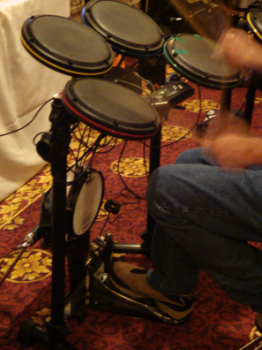 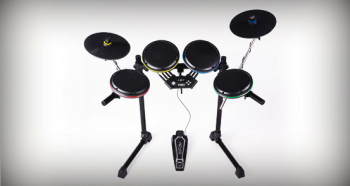 At first I was surprised that modified controllers and fancy drum kits were allowed, since they seemed to make for an uneven playing field. But of course some musicians have much better instruments than others, and athletes are allowed to compete in performance-enhancing shoes or swimsuits. Competitive Rock Band players devote a lot of time to mods, customization, and repairs. Tournament organizers were not willing to put convention-owned controllers through the sustained abuse of tournament play (or to take responsibility for resulting technical snafus), and they could not realistically require players to own a pristine, unmodified controller for competition purposes. 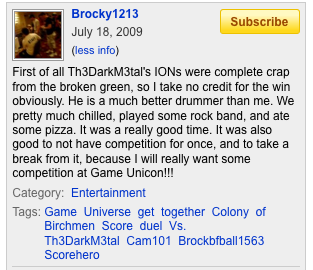 A casual drum match, with caveats about damaged equipment

The basic rules had been posted on the convention website and several gaming forums in advance:

Score Duel Double Elimination
You Must Play on Expert Difficulty
Each Match is Best 2 out of 3 Songs
The Player on the top of the Bracket can choose to pick which side he is on or pick the first song. The first song is then played.
The Second Player then picks the second song.
In the event that each player wins a match a third song will be chosen at Random using Random.org song must be at least Moderate Tier in difficulty.
All Rock Band 1 and 2 Disc Songs will be available to pick. No DLC… there will be some there for freeplay but not in the Tournaments.
THE ROCK BAND FULL BAND TOURNAMENT WILL BE SEEDED BY THE GUITAR ONLY TOURNAMENT ON FRIDAY!

The players were totally score-oriented, as one would expect at a tournament that didn’t award style points.3 They focused on the screen and rarely indulged in any rock-star moves, though I saw several people twirling their drumsticks as they waited to play. Audience members with video cameras also kept their focus on the TV screens, not the players; they documented the steadily rising scores and the moments when something went awry for one of the competitors. Numerous Guitar Hero and Rock Band videos on YouTube adhere to this format, with players dissecting their own performances after the fact:

But while players didn’t perform like rock stars, the sheer physicality of their gameplay was striking. Waiting drummers clutched their sticks, standing behind active players and ghost-drumming along with the on-screen notation in perfect unison. Players had distinctive physical styles and approaches to drumhead rebound; some were choppy, heavy hitters, others fluid and graceful.

A finalist in the guitar tournament

After a while, something about this cacophonous hotel conference room filled with fidgety teens playing plastic instruments began to feel very familiar to me. I realized that it reminded me of my All-State clarinet auditions in junior high and high school. There were no Cannibal Corpse t-shirts there—band and orchestra kids generally occupied a different niche in the teenage social ecosystem, and even the metal heads among us would have dressed a bit more formally for the audition judges. But there was the same charged atmosphere of performance anxiety, the same high-volume heterophony generated by compulsive repetition of tricky musical passages, the excitement of meeting peers who shared one’s interests, and the daunting realization that one might not be the biggest fish in the pond. I chatted with one of the proud moms at the Rock Band tournament as her son made it through several rounds of competition; he was visibly sweating from the exertion of playing drums, and enthusiastically shook hands with his opponent at the end of each song. She mentioned that he also played several traditional instruments, including non-Rock Band drums, and was hoping to go to Berklee to study music some day—but it wasn’t yet clear how serious he was about it. Meanwhile, playing these games was simply another aspect of her son’s musical life, and she was happy to support it.

My experience at Game Unicon made me think about the “pick up a real instrument” discourse from a new angle. My research doesn’t focus on children or teens and their musical development, in part because of the labyrinthine requirements for getting IRB approval to do “human subject research” with minors; I’m not even supposed to interview anyone under 18. But I’ve paid close attention to the wealth of hand-wringing media stories about how Guitar Hero and Rock Band could keep kids from taking up real instruments. These stories assume a false dichotomy; as I’ve discussed elsewhere, lots of people do both. But what if they didn’t? If the 14-year-old boy never played a real drum kit or went to Berklee, but put in hours and hours of disciplined practice on his plastic kit, gained an intimate knowledge of hundreds of songs across several genres, developed close friendships and respectful rivalries with fellow players, and expanded his multimedia skills by editing videos of his gameplay to post on YouTube, wouldn’t that still be something worth cultivating? I’m not here to endorse one musical practice over another, but I’ll be interested to see how many more proud parents start to show up for tournament play.