Who are you calling bebot?

The Grammy-winning, multi-platinum-selling, global hip-hop phenomenon The Black Eyed Peas debuted their latest album at number one early this summer.1 As I listen to the album’s first single, “Boom Boom Pow,” I recall the Filipina/o American feminist controversy launched on the internet three years ago regarding the Black Eyed Peas’ song “Bebot” or “Filipina Hottie” and its two music videos: Generation 1 and Generation 2. In an open letter, feminist Filipina/o Americans across the U.S. and the Philippines condemned the hypersexuality and objectification of Filipina women in the “Bebot” videos. They wrote: “[A]s Filipina/o and Filipina/o American artists, academics, and community activists, we are utterly dismayed by the portrayal of hypersexualized Filipina ‘hoochie-mama’ dancers” in Generation 2, the contemporary version of the video, and the problematic representation of Filipina women as sexual objects for Filipino men in the historic portrayal of early Filipina/o America in Generation 1.2 In effect, the open letter argued that the visibility and celebration of Filipina/o culture in popular representation happens at the expense of women who are presented as objects for male consumption and whose bodies are the terrain on which national and ethnic pride are established.

I re-visit this controversy to assess how feminism, nationalism and popular music and representation interact today. I suggest we dig deeper by asking questions about both sexuality and representation that complicate the primarily gendered critique of the “Bebot” videos: Does the sight of brown female skin evoke its many colonial deployments in ways that obscure the political intervention that different representational forms, structures and grammar can offer? In this particular case, is sex always already demeaning and negative for marginalized women?

What Stuart Hall called “the burden of representation” for artists of color rears its head anew in the form of feminist critique. Political, harmonious and stylish, the Filipino/African American singer/dancer Apl De Ap, founding member of The Black Eyed Peas, uses music, dance and fashion to articulate, in the most recognizable and noticeable form today, the Filipino American diaspora in transnational popular culture. Because sightings of Filipino American popular representations continue to be rare, the artists of color committed to presenting such images are met with a lot of adulation and expectation. How does this feminist critique converge with visual, sonic and sexual analysis?

The open letter inserts to the burden of representation critique the pain of representation for spectators in primarily gendered terms. Reminding us of the power of popular culture to shape lives, these critics prioritize a victim position for the women in the lens of mainstream interpretation. That is, the letter belittles the feminist, sexual and visual power of the bebot herself. What we need to watch out for (in the video and the critique) is how hypersexuality is too easily condemned in ways that also over simplify the power of sexuality in representation. A closer reading of the video reveals the power in the Filipina American women’s performance and shows how through the body and representation, these women assert desire, express enjoyment and claim sexual power.

Let’s first define hypersexuality as excessive sexuality that is too often attributed as natural to Asian American women in representation and across history. However, I argue that for those with limited representations, like women of color, hypersexuality and its depiction are too easy to condemn and dismiss. If we can get beyond the condemnation of certain representations of sexuality, something more productive and surprising may emerge from the screen. A closer look at the Filipina American women’s performances as hoochie mamas in Generation 2 of “Bebot” yields more complex results. We cannot ignore that even “hoochie mamas” are complex figures in the video. The women are not simply objects for men but also desiring, productive and commanding subjects.

The video for the Black Eyed Peas’ “Bebot”

Upon close reading, we can see that there are at least three to four kinds of women in the video. First, there is the desiring subject with the sexy dance moves who looks and looks back at Apl. When Apl sings “magandang dalaga…” (beautiful single lady) or “I am moved with pleasure at your beauty that’s unbeatable in the whole world,” she looks at him with a powerful expression of sexual desire and confidence. 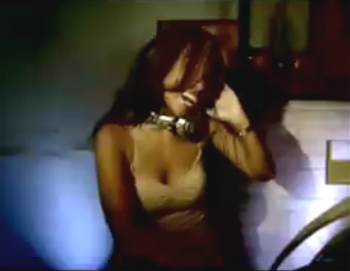 The video also features vigorous, aggressive dancers who move thuggishly in a way that is typically gendered as masculine, fully dressed and battling on the dance floor, as a very bebot (hot) Filipina American DJ spins records. The DJ, as Sunaina Maira shows in her work on second-generation Indian American dance cultures, controls the room and holds the most cultural capital in the club.

Finally, there is the figure of the little sister, who leaves the house demure and chaste, and then transforms into a scantily-clad, available and fun-loving woman on the dance floor. This complex character warrants more particular discussion.

Dance and dress are negotiations with power, expressions of style and resistance, and a testament to the complexity of Filipina/o American gendered experiences. The video asserts this by showing how the little sister negotiates the private and public space of the home and the club respectively. We see how the little sister, under the gaze of her immigrant mother, deals with the gendered and racial demands placed on second-generation youth, similar to the young women in Maira’s description of desi youth. The t-shirt and jeans-clad little sister has to leave the house with a backpack, presumably filled with the skimpy clothes she ends up wearing in the conclusion of the video, while her older bother, Apl, can leave in what he wears throughout most of the video. He does not have to hide in negotiating with gendered cultural pressures like she does. The little sister’s transformation from demure and modest to full-blown club kid is an act of self-authorship that indicates being caught in this bind. It’s a contradiction that Filipina American women live under and that the video dramatizes well.

As such, this video presents a more complex form of sexuality for Filipina American women who might be seen as “hoochies” and shows how they can use representation in a powerful way. This is just the beginning. If we read closely and carefully, we can see there’s a lot more we can deduce from the work. The critics’ condemnation of sex and representation as singular and totalizing dismisses the complexity of the women who gaze, move and powerfully establish their presence in and beyond the video.

The women’s sexual and representational labor warrants acknowledgment and attention. We need to interrogate the ways in which women use the power of media culture to represent themselves and confront the gendered, sexed and racial names imposed on them. I provide close readings of the grammar of race and sexuality, and its performance and representation, in order to insert these women’s visual and bodily voices into the conversation. Their powerful, political and pleasurable representations—visual and sonic—command equally robust and energetic critique. What about the joy, pain, anger and sadness in the music? How does the harmony of voices comment on the power of sexuality, the hybridity of race and the structures of gender in Filipina/o American encounters? I am burning / bursting to know more beyond the equation of victimization by sex in representation.

Image Credits:
All images supplied by the author.