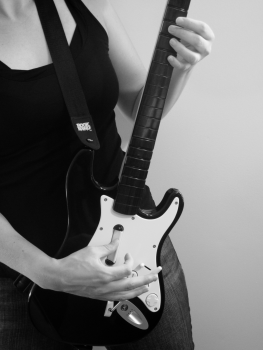 In this column, I’m attempting an assignment that I require of virtually all my undergraduate students: a performance ethnography blog post.

When I arrived at Our House East, a college-crowd bar near Northeastern University, I found Mike, the guy who runs the weekly Rock Band game night, standing out front tapping away at his cell phone—texting me, as it turned out. I recognized him from his Facebook profile photo and introduced myself. (I’d found him through a Rock Band group on Facebook and had messaged him to arrange an interview.) We went inside, where he had set up the Rock Band instrument controllers facing a large wall-mounted TV. It was only 5:30, and the college students were gone for the summer; the small bar was almost empty. Mike insisted on buying me a beer and offered me a homemade brownie from a Tupperware container. He was a super-friendly guy, and I could immediately see why he’d been hired to run a social event that required people to volunteer to perform in front of strangers.

The set-up in the bar wasn’t quite what I had expected. I had assumed the players would face an audience, as at a karaoke night—perhaps even standing on some kind of stage, with a projector screen across the room so they could read the game’s musical notation. Instead, the instruments were only a few feet from the TV; the players would have to look in that direction, with their backs to the rest of the bar. I asked Mike how he thought Rock Band nights compared to karaoke nights.

Mike: It’s a completely different demographic because most people who do karaoke are more apt to get up and sing. They want to have their own songs, and they like the attention factor of it. I think with Rock Band, it relates to a totally different demographic because it’s more based on the rock music [included] when it first came out. As it progressed, they introduced a lot more pop songs and whatnot. I think it gets more people involved, versus just a karaoke-based demographic. I mean, we’ll be playing in bars, and there’ll be age ranges from 21 to 60. And you get 60-year-olds up there playing “Paranoid” [by Black Sabbath] or something, and wanting to sing. And the way that we get them involved is to talk to them about it, make them feel comfortable about it, and show them what to do. We’ll be right by them, side by side, they’ll watch. They’ll be sitting around, being like, oh, that’s not my thing. And then they see how much fun, that everybody’s getting into it, and then, eventually, they’ll even do it and they’ll have a blast.

KM: Do you see people being self-conscious about it?

Mike: They are. A lot of people are self-conscious. I think everybody’s self-conscious in a lot of different ways, I mean, doing something that you’re not used to doing….I encourage people, but I don’t force it on them. I’ll let them know how much fun it is, I’ll put it in no-fail mode [a setting that lets the players finish a song no matter how badly they are doing]. I’ll give them a song list, and I go, “Check it out, there’s 650 songs. Just watch people and what they’re doing, and if you guys feel like you wanna get involved, go for it.” And a lot of people will be there for a couple of hours, and by the second hour, after they have a few beers, they loosen up and they get up there.

As people began to trickle into the bar, I could see that Mike knew almost everyone. He told me that many regulars had been coming to various Rock Band bar nights around town several times a week for months on end. (The bars pay Mike and his employer, Shaun, to host these events and help bring in customers; their two-person company currently runs eight regular bar nights around Boston.) We wrapped up the interview so he could greet people and get things started. 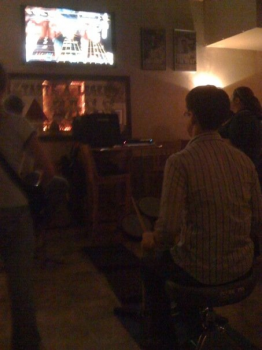 Rock Band at Our House East

Despite having significant musical performance experience, I had been nervous about the prospect of playing Rock Band in public. I was afraid that the bar-night regulars would be competitive, score-oriented players who always used the “expert” setting. But after Mike’s pep talk during the interview, I sat down at the drums right away; others picked up the bass, guitar, and microphone. Those waiting to play were chatting and getting drinks, but they paid enough attention to the game to shout encouragement now and then and clap at the end of each song. Other patrons ignored the game entirely, treating it like a pool table or pinball machine—though the music was turned up loud enough to required near-shouted conversation. As players took their turns, they kept their eyes focused on the screen but got physically involved with their performances. Guitarists played standing up and moved to the music, and drummers often twirled their sticks or tapped out the tempo at the start of songs. These weren’t showboating, spectacular performances like the ones that circulate on YouTube, but they were physically and musically engaged.

Later in the evening I interviewed two regular players, Kellie and Heather. They were in their mid-twenties and had gone to college together at Northeastern. Both women loved playing Rock Band; neither owned the game, so they only played at bar nights. Kellie had a lot of prior musical experience (including classical piano and music theory training), while Heather seemed to think of musicality as an in-born quality that she simply didn’t possess. But when Heather talked about playing Rock Band, it was clear that she was thinking musically and playing by ear, not simply following visual instructions:

Heather: I listen to the other instruments, and it helps me formulate the song in my head for the next notes for the bass or the guitar coming along. I feel like it helps me….Whatever I’m playing, I listen to the other beats from either the bass and the drums or the guitar and drums….See, I don’t know a lot of the songs. The drums are the main thing, if I hear the beat of the drums going correctly. That’s why if somebody’s playing that doesn’t know how to play drums –

Kellie: It messes you up if you don’t know the song.

Later, Heather remarked, “When I’m listening to my iPod on the bus now, I can hear the guitar riffs more, and I’m playing the notes with my fingers, like I would on Rock Band.” Both women talked about experiencing an adrenaline high during Rock Band performance, which Kellie compared to going on a roller coaster: “It was one of those feelings, like I was just terrified, but it was so much fun at the same time. There were so many emotions mixed in.”

I went to Our House East expecting spectacular, glammed-up, audience-oriented performances. Instead, I found a friendly, accessible musical scene with a tight-knit group of friends at its core—more like an open Irish session than a karaoke night, and with fewer barriers to participation than either of those other typical bar events. Much to my surprise, the scene reminded me of the participatory tradition that was the focus of my first major research project: Sacred Harp singing, an American vernacular hymnody tradition that is open to anyone, regardless of perceived musical expertise, and that revolves around drop-in community “singings” rather than rehearsed performances for an audience. 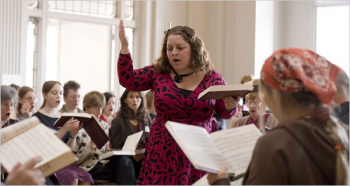 Given Sacred Harp’s strong DIY, anti-commercial ethos (not to mention the religious song texts), many participants would find the comparison to a mass-produced, rock-oriented video game bizarre. Yet at Our House East, I encountered the same sense of openness, community, and passion for collaborative music-making that attracts people to Sacred Harp singing. As Heather said, “I’m always prepared to go to Rock Band. It’s the highlight of my week.”