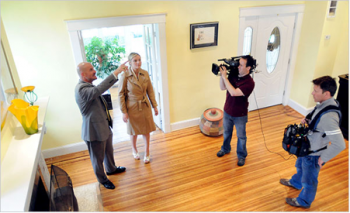 Mike Aubrey and a homeowner on HGTV’s Real Estate Intervention.

I first started watching HGTV (“House and Garden Television,” although it ought to be “Home and Garden,” for there are no houses on HGTV, only homes) about a year ago. While I’d always had “shelter lit” around and enjoyed decorating, fixing up, and generally puttering in my 1959 house (would that I could call it “mid-century modern,” but it’s just plain ranch), I’d never been attracted to watching strangers do the same in their own abodes before. Maybe it was simply that there wasn’t anything left that I could do to my house that wouldn’t require lots of money and the extended presence of contractors; lacking my usual outlets of activity and domestic satisfaction (cleaning and cooking don’t count), I found myself forced into passive voyeurism. (It was beyond my control—the cry of addicts everywhere.) HGTV quickly became a comfort channel of choice, and it hardly mattered to me whether I was watching House Hunters (the longest-running show on the network) or Property Virgins or Spice Up My Kitchen or Divine Design or Rate My Space; it was precisely the old-style “flow” that was soothing—the constant stream of other people’s houses, stuff, and choices, sometimes in cities I’d once lived in or visited, the touristic pleasure of being simultaneously elsewhere and at home. But while I still watch HGTV, I no longer find it so comforting; instead, and what I focus on here, it has become irritating and a bit anxiety-provoking.

Of course, a lot of formerly comforting things involving the buying, selling, and “improving” of houses have become sources of anxiety because of the real-estate bust. In May 2009 the New York Times went so far as to name HGTV the cable channel “more closely associated than any other with the country’s housing crisis and the perils of easy credit and living beyond one’s means,” also citing a January op-ed piece in the Wall Street Journal that labeled HGTV “a villain of the meltdown” because “you couldn’t watch these shows without concluding that you must be an idiot and a loser if you lived in a house you could actually afford.” 1 It’s true that some of HGTV’s house-buying shows feature people who seem to have nothing else to do but live large and well (especially House Hunters International, in which people who own giant beachfront houses with pools in Florida or California seek giant vacation beachfront houses with pools in Jamaica or Costa Rica). And one can’t help but wonder about the current status of all those hapless house hunters in what are now dead markets (Phoenix, Las Vegas, much of Florida)—some 2007 episodes of House Hunters and Property Virgins still run, although I haven’t seen many older than that—who purchased their “dream homes” with no down payments and 100% financing, ending up with staggeringly huge mortgage payments and houses that clearly would not sell now (or not for the prices they paid).

But villain or not, the fact is that HGTV’s audience continues to grow; the network currently ranks among cable’s twenty most popular in primetime.2 And I do believe that, for many still as for me initially, the very repetitiveness and generic structure of the programming, in addition to its insistence on the importance of “home,” helps keep it comforting (in Terry Castle’s words, “house porn” may be “a postmodern equivalent of traditional consolation literature”).3 The return from each commercial break begins with a recap of all that has gone before, so there’s virtually no suspense about anything (it’s ludicrous to show us the “gift”—usually a decorated and furnished room or outdoor space—that a young couple will receive from the network at the end of every My First Place while asking us to bite our knuckles about whether or not they’ll get to enjoy it). And I know now, having done research for this piece, that the house hunters of House Hunters aren’t, really; they already have contracts on their chosen houses, and are paid to pretend to look at two others in order to produce the illusion of the “hunt.” And that most if not all of the design or makeover shows—Spice Up My Kitchen, Dear Genevieve, Rate My Space, Income Property (whose host is both competent and gorgeous)—require substantial cash input from participants. 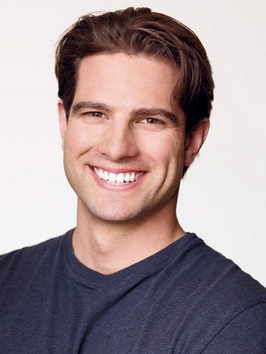 But while research and visits to viewer forums and message boards on televisionwithoutpity.com contributed to making HGTV a less comfortable place to hang out, what really got to me was the waste and standardization of taste and consumption that its shows, with some exceptions, participate in valorizing and generating. Lip-service to “individuality” and “originality” and “going green” notwithstanding, Spice Up My Kitchen, in other words, might as well be called You Need New Granite Countertops, Maple Cabinets, and Stainless Steel Appliances. 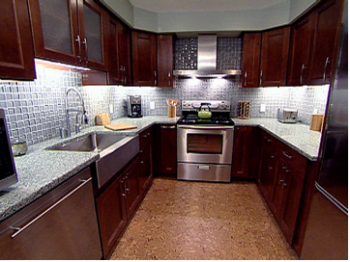 An “after” kitchen from Spice Up My Kitchen

I don’t see Spice Up My Kitchen much in the lineup anymore, for which I am grateful; I no longer have to watch a maybe run-down and weirdly painted but otherwise repairable 1920s bungalow kitchen undergo total and gleeful “demo” so that another “dream kitchen” of granite, maple or cherry, and stainless steel can be installed. I only remember one show (it was probably Get It Sold, also now gone from the primetime lineup as far as I can tell) that praised a 1950s pink tile bathroom, pristine but for some bad wallpaper, as part of a home’s “vintage charm.” Even when house hunters profess to want “character,” they usually end up falling for the new McMansion with giant closets, an “open floor plan,” and double bathroom sinks—and, of course, stainless steel, granite, maple, etc. Anything that does not fulfill these design mandates automatically “needs upgrading,” although one hopes that, once the cameras are off, the homeowners come to their senses and realize that it’s only a matter of time before granite and maple prompt the groans and scorn they are heaping upon laminate and oak. Among the most interesting new HGTV shows in this regard—part of the network’s “extensive effort to set the right tone in a somber economy,” as the New York Times puts it—is Real Estate Intervention, in which individuals who have purchased high-end appliances and upscale “design features” find not only that their properties aren’t as unique as they think they are but that they cannot sell them except a loss.4 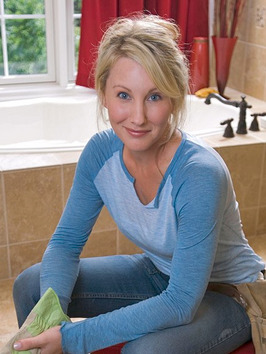 Amy Matthews, licensed contractor and host of Sweat Equity and other shows on the DIY Network

I do realize that I am all over the place here, wanting some things to be conserved—a craftsman-style 1920s kitchen, or a black-and-white tile bathroom from the 1940s—on the basis of their historical significance or aesthetic value when, again, at some point these older features were themselves the stainless and granite of their day. I can’t watch a commercial television network supported in large measure by big-box home-improvement stores and expect its shows to encourage any but the most minimal recycling or conservation. I do find that lately I’m watching more of the DIY Network (a sister to HGTV). At least for now, it seems to have less of the tear-it-out-because-it’s-there mentality, although there’s a fair amount of disco-backed demo (“testoster-home improvement,” as one host called it) in shows like Bathtastic and Desperate Landscapes. I’m especially soothed by the low-key and low-tech re-runs of Ask This Old House, in which kindly experts show me step-by-step how to fix the low spot on my stoop or install a door, as well as Sweat Equity, which is hosted by a woman contractor who seems less interested in fads than in functionality. I only hope that I can continue to hold out; I’ve seen so much stainless steel for so long that it’s starting to look classic.5