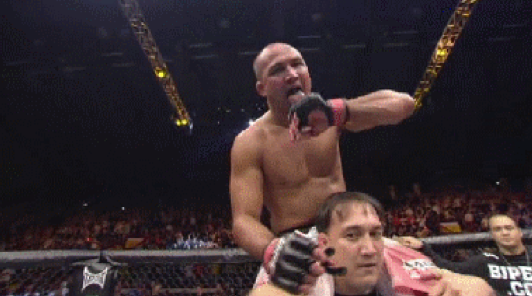 B.J. Penn, the current UFC (Ultimate Fighting Championship) lightweight champion, licks his bloody gloves after finishing off an opponent in an animal-like display of victory that marks his predatory prowess. In a related display of primal power, one of the UFC’s most popular fighters, Quinton “Rampage” Jackson, performs his signature “Teen Wolf” howl during his rabid victory antics. In one of the TapOut brand fight apparel commercials, a ubiquitous mixed martial arts (MMA) sponsor, a fighter’s eye is digitally transmogrified into several different animal eyes, what appears to be a tiger or lion, a bird of prey, followed by an image of the swirling cosmos, suggesting the timeless (ahistorical) potential for wildness lurking within a man just waiting to be “tapped” into. This idea of untapped masculine potential and a fantasy of “consummate physical prowess”1 is also suggested in the very title of SpikeTV’s weekly program which re-plays old fights, UFC Unleashed. 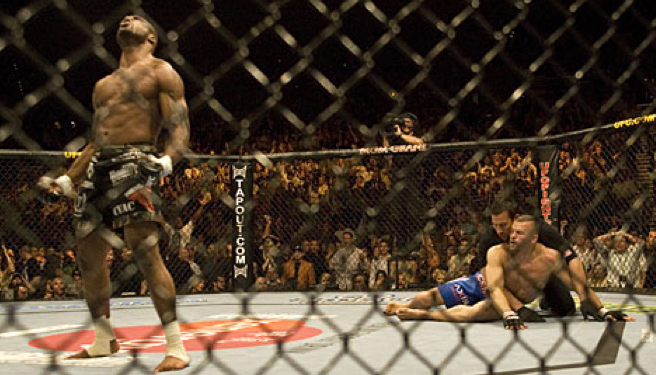 These examples are played for serious, dramatic effect, while at other points along this reality-impulse fight culture’s “inter-textual relay,”2 animal-human links, or what we might think of more generally as nature/social tensions, are played to comic effect. For example, Old Spice’s “Double Impact” body wash and moisturizer for men commercial featuring the showering centaur, the man who is “two things in one” (“I’m a man, and a pretty smart shopper”). Here the notion of animal masculinity is comically invoked to suggest that the innate element of male wildness somehow interferes with attunement to civilization’s many refinements in skin care, like moisturizer. In the film Fight Club (Fincher, 1999) primal or animal masculinity and male bonding through violence was the antidote to the emasculating effects of consumer culture and alienated labor, while here primal masculinity is parodied, co-opted, quite literally domesticated, suggesting men can retain their wildness and still be “smart” consumers. Competing discourses of wildness and civility, instinct and discipline, and “heart” vs. mind, organize much of the rhetoric surrounding this fight culture. This amounts to a linking of the “natural” with the commercial, a co-opting of images of nature which appears to answer some felt need in the male viewer/consumer to have their “natural” wildness affirmed, to encourage them to embrace this wildness and “unleash” a buried inner potential. We even see this in the commercials for the ironically dubbed “‘natural’ male enhancement” products pawned awkwardly before and after rounds of sweaty, muscular grappling and fistic bludgeoning.

As reality TV goes this desire to invoke primal or wild masculinities unencumbered (or at least less encumbered) by social obligations is evident in other programs, such as Man Vs. Wild (Discovery), Survivorman (Discovery), Last One Standing (Discovery), Going Tribal (Discovery), Wildboyz (MTV), and Tribal Life (Travel Channel). MMA programming, and in particular the UFC brand, presents its own rhetoric of wildness and primal access by naturalizing masculine prowess and aggression through association with natural and animal imagery and motifs, including neo-tribal tableaus and myriad thorny tendril motifs (i.e. undomesticated and naturally threatening botanicals) emblazoned on screens and bodies.

It is curious that scholarly and critical forums are not attending to the foregoing ascendancy of mixed martial arts from reviled (“human cockfighting”), marginal cultural “attraction” to mainstream phenomenon. There was much critical dialogue in the wake of Fight Club, and perhaps people figure that what was said then sufficed and still applies to the present state of reality-based fight culture. Maybe it is MMA’s lack of subtlety, lack of aesthetic distancing, its bald immediacy that stymies discussion (though I doubt this given the ample attention paid to other reality-based media). Or is it that there is so much there, a semiotic “punches-in-bunches” if you will, one is not sure where to begin?

MMA so blatantly participates in discourses of nation, race, class, gender, power, and especially border-crossings (in the form of cross-cultural appropriations) comprising its cultural DNA. While we see the dominant institutional sports become increasingly international in their make-up, none is quite so dependent on an international talent pool, an international kinesthetic repertoire, and an international fan base as MMA. With the triumphalism surrounding the UFC’s storming off into continental Europe with UFC 99 in Cologne, Germany, and the build-up to UFC 100 set for July 11, which includes two “super” fights, an unprecedented fan expo, viewing parties across the country, and any number of other commercial tie-ins, it is a good moment to take stock of this burgeoning “reality” sports’ rapid global expansion and the “naturalizing” semiotic profusion carried with it. UFC 100 is pitched as a historical monument to the organization’s staying power and legacy, which also includes a special program featuring “The 100 Greatest UFC Fights of All Time.” This all amounts to a canonization and historicizing (i.e. temporalizing) process superimposed over the more implied de-temporalizing discourses of primitive wildness and instinct.3

Most of what has been written outside of journalistic discourse on mixed martial arts deals with its implications for the health professions (new varieties of injury), sports science (new varieties of strength and conditioning training), and the sociology of sport as MMA’s no-holds-barred forebears enacted a process of “de-sportizing” of traditional martial arts disciplines (jujitsu, judo, wrestling, muay thai, boxing, etc.), to the present “(re)sportizing” process of MMA through increased rules and regulations which has lead to its mass-market success.4 (Indeed, establishing MMA as a legitimate sport and a martial arts style unto itself and not simply a taboo spectacle of violence is perhaps the central accomplishment of the UFC brand). These are necessary approaches, but they do not account for the consumer repertoire of imagery and motifs at work in this fight cultures’ socio-biological and socio-psychological imaginary. And certainly there are other marked discourses woven in, like the war/combat metaphors, the psycho-sexual element, homoerotic spectacle, human-machine motifs, related kinesthetic repertoires found in video games and martial arts cinema, and feminist concerns related to “hegemonic masculinity”. I find the human-machine connections especially fascinating. In MMA the fighter is objectified as body-technology, as a predator-machine whose key instruments (fists, knees, elbows, feet) are as little mediated as possible (those small gloves!). This feeds into a fantasy of “natural,” un-alienated labor.

Primal screams and other visual and rhetorical devices are set in opposition to producers’ construction of fighters’ normal guy, “backstage” personas. If there is one device that has helped to launch the UFC to a much wider audience it is the deployment of “reality” TV style construction of the fighters’ back-stories. This takes the form of emphasizing a fighter’s fluency between worlds both wild and civilized, caged and un-caged. Rich Franklin, former middleweight champion and fan favorite, is rarely discussed without reference to his prior vocation as high school math teacher. UFC commentators, Joe Rogan and Mike Goldberg, reliably comment on how “nice” and “intelligent” so-and-so is, but this is always set against talk of degrees of “heart,” code word for that ineffable question of a fighters’ will to survive in the cage. I do not want to suggest that all a fighter does to succeed in the cage is tap into some inner wildness without recourse to technique and training. It would be hard to overstate how disciplined these fighters are in terms of technique and sheer physical preparedness, or “durability,” as they like to say. But that unquantifiable element, the “heart” of a fighter, manifests itself discursively as a tapping into some latent but buried wildness, and there is always a tension in play between the more quantifiable disciplinary elements gauged through rankings, belting systems, and notable coaches, and the more unquantifiable element of “heart” or “spirit.” 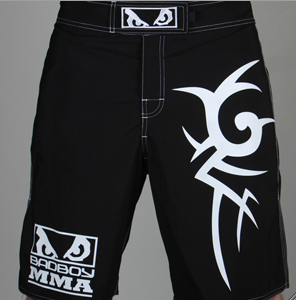 Susan Bordo refers to this complex as “the double bind of masculinity,” the “gentleman and the beast,” the archetype of primal masculinity she sees personified in Edgar Rice Burrough’s Tarzan.5 The gentleman/beast, or social/nature binary tensions come to fascinating performative life in the SpikeTV reality show, The Ultimate Fighter, where the site of domestic confinement, the fighters’ house, is the source of chaos, and the cosmos (or order) is paradoxically found in the cage.

Where does one look for the positive couplings of the “natural” and commercial? Where is the spirit and idea of wildness applied progressively in consumer culture? Somehow I think this fantastic and psychologically projective appropriation in the arena of MMA is inevitable, but also potentially degrading to how we imagine wildness and our subjective relations to nature. My own romantic fantasy is that our engagements with the “natural” ought to intercede and challenge our consumer desires, not fuel them.