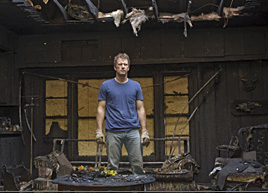 When the HBO series Hung premiered on June 26, 2009 the inevitable happened – the big penis got its own TV show, titled after it no less. There’s a national fascination with penises, and television joins film and other media to laugh about small ones (Seinfeld), celebrate the revival of ones that don’t work (Cialis commercials), gasp about melodramatic ones (TV news and John and Lorena Bobbitt), and swoon over big, impressive ones (Ally McBeal) [Lehman, 2007 and 2008]. In two of our previous Flow columns, we placed Californication and Six Feet Under within a new body guy genre that we analyze in detail in our forthcoming book, Body Guys in the Movies: Unmaking Love and Remaking Your Life. The movies explicitly link the body guy’s special gift as a lover to his good-sized penis: television has just caught up!

Ray Drecker, high school athlete, pro baseball player, and current high school coach is the well-hung body guy at the center of Hung. His jock status ties him to the world of the body typical of the genre and his low-paying job makes him, for all practical purposes, working class. Even though he is a high school teacher, the pilot establishes his exclusion from the world of the mind. We see him teach a class only once and he shows no interest in it. He’s brought in a “poet in the schools,” Tanya, to save him the trouble of preparing a lesson plan. He spends the class time staring at her with sexual desire, and we later see them having hot sex together.

Yet, Hung is unusual in a significant manner. From the beginning, the pilot associates the body guy with loss and failure. We see images of the show’s setting, Detroit, in economic ruin while Ray laments in voice-over what has happened in America; a ruin that parallels his own life. His beauty queen, high school sweetie and wife of twenty years, Jessica, divorces him for a wealthy man; the uninsured house he grew up in burns down; he loses custody of his children; he owes back taxes; and his low salary as a high school teacher forces him to find additional work. It seems that he has nothing and logically, being well hung seems good for nothing – he is a loser. Enter the contradiction. In a flashback, we see Jessica angrily drive away as she lists all Ray’s attractive high school qualities that he has lost: “… you were beautiful, athletic, talented, smart, popular…and hung.” Ray shouts after her, “And what am I now, Jessica, what am I now?” She retorts, “Now you’re just hung.” At the height of her fury for wasting her life on a loser, she has to acknowledge that his being hung was a very real asset. A parallel moment occurs in the flashback where we see Ray and Tanya having first time sex. He is on top of her vigorously thrusting while she ecstatically moans and groans with a look of orgasmic pleasure on her face. To be sure we do not miss the point, she screams out, “You’re so big, oh my God.”

Both Jessica and Tanya reaffirm the significance of that big penis in another way
— they remain under its “power” even after Ray is gone. When Ray shows up at a party at Jessica’s new home to ask for a loan, she shows an inexplicable interest in him despite the presence of her new husband. 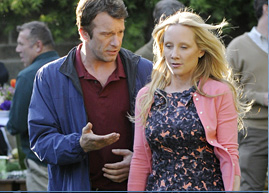 When Ray attends a self-help job seminar he runs into Tanya again and they end up in bed, their sex act depicted in an identical manner to the first time, including her screams about his size. When Ray casually prepares to leave afterwards, Tanya berates him for arrogantly thinking that his big penis is all she cares about; so disgusted with the thought that she announces she must change the sheets as if to rid herself of any traces of his presence. But she returns to him again platonically when he misses several seminar sessions. He shows her the personal ads he’s written to sell his sexual services as “Big Donnie,” and she offers to become his “pimp” and market him properly for a percent of his profits. Once this special big penis has touched a woman, she cannot easily move on and forget it. Both these women let Ray know that being well hung makes a big difference in their pleasure, even at the height of their anger. The women and the premise in the pilot valorize the big penis even as the man who possesses it has nothing else. It gives him something worth more than all that has been lost.

Jessica was enamored with Ray at age 18 when she was the high school beauty queen, following the conventional pattern of young, attractive women having access to Ray’s type of stellar masculinity. Yet, the former beauty queen shouts her disenchantment with Ray’s promise as a young, popular, well-hung jock: “[I was a] stupid-ass beauty queen. Clearly I was stupid enough to have completely bought into it.” Remarkably, however, Tanya, an erudite and educated, 38-year old woman of average appearance repeats Jessica’s infatuation with Ray’s gift and also buys into it. 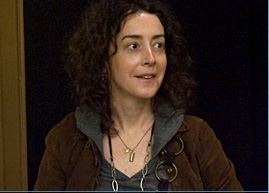 Thus the show proclaims Ray’s masculinity a damaging myth while at the same time offering it as attractive and accessible to an intelligent, professional woman approaching middle age who is not a beauty queen. The show broadens the insidious project of offering the well-hung body guy and his athletic sexual performance to conventionally attractive young women to include accomplished mature women, as if to tell them they too can find satisfaction and completion with the well-hung body guy. It’s never too late.

If Ray’s big penis gives him something worth more than all he’s lost, it also gives him something more than what others have. The show essentially sets up a penis/money dichotomy with the penis, or, more accurately, the big penis, as the privileged term. Ray has no money, and it’s the root of his personal problems, yet the wealthy men in the show, Jessica’s dermatologist husband, Ronnie, and Ray’s attorney neighbor, are exceedingly unappealing. The rich guys even look similar. Both are short with a soft appearance and no signs of athletic prowess. Ray on the other hand is a tall ex-jock and classically handsome. Before we see Ronnie, Ray refers to him as an “overcompensating little fucker,” a label confirmed in stereotypical ways the second we see the short man tending meat on his grill at a deadly dull backyard party. Everything about the “overcompensating little fucker” suggests that he is far from well-hung. 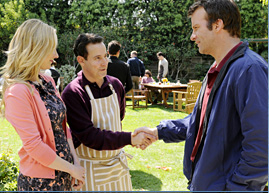 Ray’s arrogant neighbor, Koontz, lives in a McMansion complete with Grecian statues and acts in an overly aggressive boastful manner, another cliché about men overcompensating for small penises. Upon first meeting his neighbor, Ray is filmed in extreme high angle, appearing little boyish. At this point Ray thinks Koontz is inviting him to an open house party, but instead he smugly asks Ray to clean up his yard. By the end of the pilot, it’s Koontz who is filmed in high angle, appearing tiny from an emboldened Ray’s perspective, reversing the size reference. Ray says of himself, “My big dick is all I’ve got,” but the pilot suggests that it’s worth more than all the material possessions the educated, wealthy mind guys with their law and medical degrees conspicuously display. They’re the real losers. Big money and big brains are no substitute for a big dick: all they do is advertise what a man doesn’t have, implying that masculinity boils down to one thing.

Alessandra Stanley begins her review of Hung with a very clever pun by noting of Ray’s life, “He is hanging by a thread. But that’s not why the story of his life is titled ‘Hung.’” Perhaps not but that is precisely how we read the current cultural investment in narratives about body guys with big penises and thrilling pounding sexual performances aimed at contemporary women. The impressive spectacle of the big penis hanging with its promise of a gifted sexual performance is desperate and indeed hangs by a thread, one that is easily torn, leaving nothing.