Gypsy Stars in the New Europe 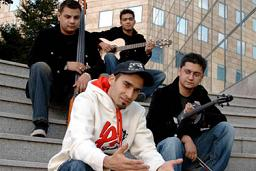 Roma Celebrity
When most of us hear the word, “Gypsy,” we imagine the fortune-teller, musician-dancer, pickpocket, and other stereotypes gathered from centuries of popular literature, movies and travel gossip. Real, contemporary Gypsies, or the Roma, tend to appear in two kinds of contexts, both of which are less than glamorous: as the poorest and most deprived European minority, the Roma are the subject of countless European Union, state and local policy regulations, as well as ethnographic research and documentary films. The majority of the Roma, most of whom live in the countries of Eastern and Southern Europe, have clearly been the losers of the post-Cold War transformations, caught in a vicious cycle of poor educational and job opportunities and violent social exclusion. Perpetual scapegoats for the region’s marginality within Europe and for its recurring crises of national sovereignty, the Roma have only been tolerated as musical entertainers for centuries. However, in the postsocialist era, entertainment has taken on increased cultural and political value. In the new, expanding and globalizing media environment, many young Roma entertainers have been well-positioned to become media stars.

The emergence of Roma stars raises questions that are familiar from debates about the politics of ethnic representation in the United States. First of all, how does the rise of Roma media stardom mediate between the poor, despised Roma minority and the prejudiced non-Roma national majority? A critical engagement with Roma media stardom is hindered by the fact that, in the post-Soviet region, the politics of representation is a fairly novel and imported concept, which is embedded in widespread anti-Americanism and a suspicion about political correctness. I offer a few brief test cases that foreground the ambivalent politics of nationalism and Roma media celebrity in the New Europe. 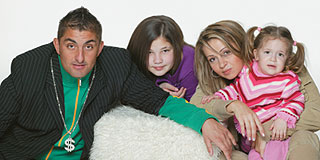 The Blacks of Europe
While this title has been claimed by the Irish (perhaps most memorably by the working-class soul band in Alan Parker’s 1991 film The Commitments), the recent proliferation of Roma hip-hop bands reveals a new wave of analogies between Roma and African-American and Afro-Caribbean identities. The infiltration of Eastern Europe by world music, particularly by MTV, immediately shored up Roma musical talent. In the most radical cases, the Roma ghetto, the very space of the urban ethnic underclass and Roma segregation, turned into the site of profitable entertainment. A term loaded with traumatic historical connotations, “ghetto” immediately evokes the Roma Holocaust, an often-neglected effect of Nazi persecution during World War II. The post-Wall establishment of Roma camps in Western Europe and instances of violent segregation in the East recently revived the concept.

At the same time, Budapest’s Roma ghetto, the notorious 8th district, turned into “the local Harlem” virtually overnight. Roma rap bands from the neighborhood, such as Fekete Vonat (“Black Train”), became popular in the late 1990s. They employed the hybrid sounds and languages of global music and turned the poor district into a metaphorical space of budding Roma identity politics. The 2004, self-described “animated ghetto film,” Nyócker, (The District, d. Aron Gauder), further eroticized Budapest’s Roma ghetto, this time on the international festival scene. The film includes a number of hit numbers by Roma musicians, one of whom, L.L. Junior, plays the lead character. Other success stories include Czech Roma bands Syndrom Snopp, led by the Roma rapper Cerny pes (“Black Dog”) and Gipsy.cz, led by rapper “Gipsy” (Radoslav Banga). The latter’s 2006 song, Romano Hip Hop, made it onto the World Music Charts’s European Top Ten and was widely distributed in Europe.

The local versions of Pop Idol have provided many Roma musicians with instant nationwide exposure. Roma singer Vlastimil Horvath won the 2005 season of SuperStar in the Czech Republic, in the same year as Caramel, a.k.a. Ferenc Molnár, won Megasztár in Hungary. While their ethnicity was at the center of public debates about whether the rise of Roma stars will elevate the status of the entire minority, the singers themselves have been eager to renounce the burden of representation. Their reluctance is understandable in light of the minefields that Roma entertainers have to negotiate, easily exploited as they are by both commercial media and state politicians for the economic and political capital they represent.

Embracing selected, “model” representatives of the minority has long been the state’s strategy. It has been revived in post-socialist states’ and their media’s management of Roma pop stars, often to demonstrate progressive ethnic policies within the European Union. For instance, Ibolya Oláh, who finished close second in the 2004 season of Megasztár, represented Hungarian culture in the European Parliament in Brussels, where she performed a patriotic song in 2005. Perhaps nowhere are the ambivalences about the politics of Gypsy stardom more evident than in Czech Television’s, the state broadcaster’s, choice of Romano Hip Hop to represent the Czech Republic in the 2009 Eurovision contest after the miserable failures of more traditional Czech musicians in earlier years. This has occurred at a time when the economic crisis has predictably prompted renewed anti-Roma violence in the country. Lead singer “Gipsy” himself has claimed he represents the Czech nation as much as the Roma around Europe, but the conflict between these two affiliations is evident. While he compares the national political potential of his Eurovision performance to the election of Barack Obama for president, he also hopes to mobilize the transnational Gypsy vote to make those “Nazis” back home “shut up.”1 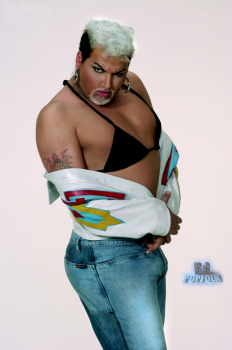 Reality Roma
Commercial television networks, which are more recent arrivals in the post-Soviet media scene, have also been eager to cash in on Roma star power, particularly in reality programming. The Roma regularly appear on exploitative talk shows as representatives of the poor, uneducated underclass. But as stars, they take on a larger role as representatives of the nation, rather than simply the minority. A most successful case in point is Bulgarian chalga (Bulgarian pop-folk) singer Azis, or Vasil Troyanov Boyanov, one of the most memorable contenders of Eurovision 2006. Azis is a gay Roma drag queen with a bleached beard and moustache, who often performs heterosexual roles on stage and in his music videos. He is a superstar with a trans-Balkan appeal, who is equally popular among gay and straight, Roma and non-Roma audiences, and whose career highlights have included running for Parliament as a representative of the Evroroma (Euroroma) party in 2005 and a well-publicized participation in the Bulgarian VIP Big Brother, alongside his husband.

The most recent development, celebrity docusoaps about Roma musicians, have earned a much more mixed reception. Vali Vijeile, or, by his original name, Valentin Rusu, is a popular Romanian manele (another regional pop-folk style) singer. His primetime docusoap, Aventurile familiei Vijelie (“The Adventures of the Vijelie Family” 2005- ), is produced by Prima TV, one of the first commercial channels in Romania. The Győzike show (2005- ) is aired by Hungary’s most successful commercial channel, RTL Klub, in primetime, and revolves around Roma pop singer Győző Gáspár and his family. Modeled after The Osbournes, both programs have been massive audience successes and universally ridiculed targets of criticism at the same time.2 From overtly racist rants to highbrow disdain, the emotions that have poured into public discussion in response to these shows reveal profound anxieties about what constitutes the national family and its allegorical extension, the postsocialist nation. The love-hate, or, rather, love-to-hate relationship that audiences express toward these shows indicates that Roma celebrity exposes the decline of long-held distinctions between high and popular culture, the national majority and the Roma, as well as national and global cultures in the New Europe. At the same time, the Roma remain suspended in political ambivalence on the shared turf between transnational media corporations and the nation-state, poised between empowerment and exploitation by both sides. 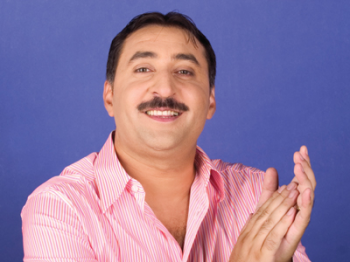