‘We’re Making Our Own Paparazzi’: Twitter and the Construction of Star Authenticity
Anne Helen Petersen / University of Texas – Austin

On March 25th, 2009, Noam Cohen of The New York Times suggested something scandalous: stars, including 50 Cent, Britney Spears, and Ron Paul, may not, in fact, be doing their own Twittering. This insight was not the result of some massive expose — indeed, many celebrities, including Spears and Barack Obama, have been somewhat forthright about their use of Twitter for brand development. Yet the implication was a bit of a shock: even though celebrity advice columns and memoirs have long been ‘ghosted,’ there was something very different at stake in ‘ghost-twittering.’

As a star scholar, I was curious as to how this ‘disclosure’ of ghost-twittering would affect current celebrity Twitterers — and how, or if, they would work to further construct themselves as the ‘authentic’ voice behind the tweets. Thus I wrote a brief Tweet to Ashton Kutcher, perhaps the best known of celebrity tweeters, linking the story, querying “true of you, @aplusk? Ghost-twittering? I’ve always wondered” His reply and retweet were almost immediate: “not a chance. i would rather not tweet at all.” 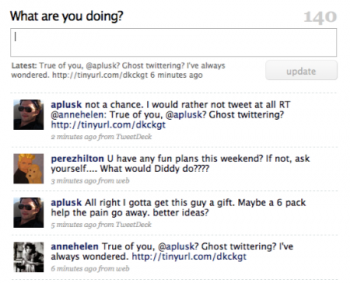 The Star Scholar Attempts to Contact Her Object of Study

I was admittedly starstruck. Told everyone I knew. Including my adviser, who asked “But how do you know that even that’s from him?” I didn’t, of course. I had ‘bought’ his ‘authentic’ defense of his ‘authenticity’ entirely. Another colleague pointed out that he tweeted far too much for one person who was otherwise occupied with work, production, etc.

True and true. I would like to point out, however, that while being a celebrity does, indeed, require a tremendous amount of a labor, a significant portion of that labor is what others might term ‘leisure’: hours in the make-up chair, traveling between appearances, waiting in trailers. In other words, activities when one’s hands are free to type on a mobile device. It is neither impossible nor inconceivable that Kutcher would post between ten and twenty tweets a day — I have friends who tweet just as much, and they have far less at stake in terms of publicizing their own image. Indeed, the biggest celebrity Twitterers are those who hover somewhere between the A and B-list: Kutcher, John Mayer, Rainn Wilson, Shaquille O’Neal. In other words, celebrities looking to reenergize their image. This move has certainly proven effective for Kutcher, whose very public ‘race’ with CNN to one million followers and subsequent ‘punking’ of CNN prompted extensive media coverage.

But let’s step back and contextualize Twittering within star discourse more generally. The most high-profile Twittering has centered on two types of use: citizens using Tweets to report a major event (Obama’s Inauguration, The Mumbai Attacks, The ‘Miracle on the Hudson’) or celebrities using the service to proffer personal information (Lance Armstrong reassuring followers just hours after a major crash, Ashlee Simpson posting pictures of her newborn baby). Both uses have been discussed as a means of generating a cloud of ‘authenticity’ around an event: because thousands of individuals micro-report an event or Simpson posts a picture herself, both connote a lack of mediation and manipulation commonly associated with the mass media.

Of course, such discourse is nothing new, at least not as relates to new media — the internet offers us freedom! Unmediated access! I would like to suggest, however, that the attraction to Twitter, at least as pertains to celebrity gossip, springs from a general disenchantment with and skepticism towards these original new media forms. No one believes that a celebrity’s website is run and updated by that celebrity. But a Twitter account — now that seems real.

But why? A number of Twitter ‘functions’ facilitate this construction of authenticity. The first and most obvious is the use of first person address. When Taylor Swift writes “The car just arrived to take us to the airport. Taped to the seat in front of me is a sign: ‘Taylor, don’t forget your retainer.'” she invokes her own experience and a sense of intimacy — she is telling you a story about her own life.

Second, a star confirms her authorship through the perceived match between her image and Tweets. For example, Sarah Silverman‘s recent post of “Diarrhea would be a beautiful name if it didn’t mean diarrhea” convincingly reproduces her established image as a crass, off-beat comedienne. (An account for ‘Tina Fey,’ recently renamed ‘NotTinaFey‘ has ‘tricked’ over 300,000 users because the Tweets so closely matched her persona: “Am I eating a Caramello bar for lunch? Yes. Yes I am.”)

Third, the Tweets help conjure the existence of a ‘celebrity club’ (the idea that all stars are friends and hang out) via replies. (For the most hilarious enactment of the Twitter celebrity club, see below.) Taylor Swift says ‘goodnight’ to Selena Gomez; Silverman claims “Rainn Wilson just kicked me in the vagina monologues.” As witness to ‘intimate’ star conversations, we are supposedly witness to the ‘real’ star beneath the media manipulation. 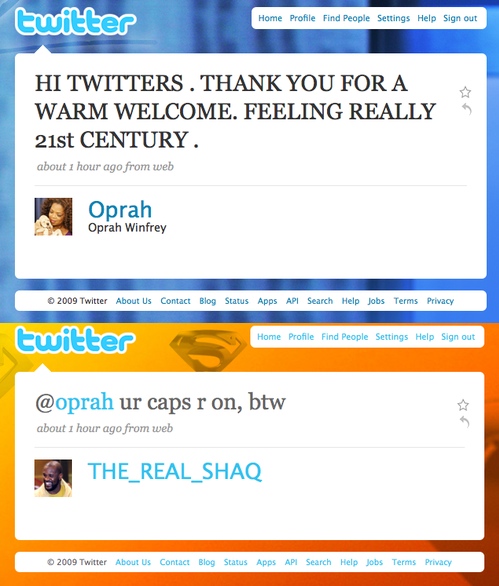 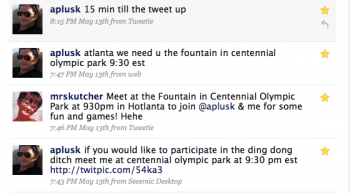 Fifth, stars alert followers of their whereabouts, either by scheduling ‘Tweet-ups’ (For Kutcher and Moore’s latest stunt, they told followers to meet them at the fountain Centennial Olympic Park in Atlanta) or generally informing of one’s schedule, as when Hugh Jackman tweeted that he would bring the hundreds of fans camping out before Wolverine coffee and donuts, or John Mayer proclaimed “Just got to the Santa Monica Steps…somehow picked up 4 paparazzi. You might as well all come join me. Bring workout gear. Here for 60 mins.” Such tweets serve as a sort of verification: the star, and his Twitter image, made flesh.

The final and most compelling communication of ‘realness’ is through the posting of ‘Twitpics,’ which allow users to upload photographs via mobile devices. Such photographs depict what we are to take as the star’s everyday existence: Nicole Richie with her infant daughter, Jon Favreau on the set of Iron Man 2. Indeed, the low quality of these images only further reinforce their authenticity. 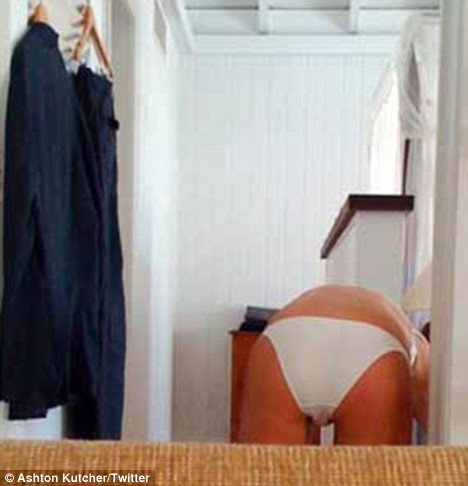 The Most Famous TwitPic: Kutcher’s ‘Portrait’ of Moore

Ultimately, such Twitter-specific functions combine to create an aura of ‘realness.’ The star becomes more accessible, more likable — his ‘ordinary’ traits are emphasized and juxtaposed with his ‘extraordinary’ talent, beauty, or skill. A star’s image is likewise renegotiated through extensive Twitter use: he or she comes becomes a superlative of authenticity. Celebrities such as Richie, formerly known for their highly manipulated personalities, begin to be associated with rhetoric of transparency.

Again, I’d like to contextualize this move. As Richard Dyer points out, stars have long embodied the paradox of the extra-ordinary and ordinary: whether through stories that paired Joan Crawford’s domestic work with her clotheshorse wardrobe or US Weekly‘s “Stars: They’re Just Like Us!” Granted, the rise of new media technologies, including digital photography and the gossip blog, have certainly shifted the ways in which that authenticity is sustained and negotiated. 1 What is truly novel, however, is the way that celebrities are articulating and negotiating their own images via Twitter. Unlike gossip blogs, which handily manipulate, defame, or the celebrity image without the celebrity’s consent, Twitter functions as a form of sanctioned P.R. Even if the celebrity herself is not doing the Twittering, it is performed by an assistant wholly conscious of the account as a means of brand management.

Ashton Kutcher refers to this process (in a tweet, of course) as “taking back our own paparazzi” — wresting control over the way he and wife Demi Moore are represented via mass media. According to this logic, the more readily available he makes himself and his image to his fans, the more his self-construction will take hold, as opposed to the construction forwarded by fan weeklies, Perez Hilton, et. al. Taken to its full extension, Kutcher’s actions might obviate the need for paparazzi altogether — when the stars surveille themselves, making their quotidian activities available for free, who wants to pay money to see less intimate, less interesting photos?

For now, Twitter is the most exciting and dynamic terrain in star studies. Thousands of celebrities, fans, and the ghost-twitterers that may or may not serve as their intemediaries are interacting on a daily business. It remains to be seen whether Twitter, and other forms of social media, will discourage the tremendous paparazzi industry — one need look only to the ever-growing reach of TMZ.com for proof. Yet stars are indeed shifting their images through Twitter — and whether or not Kutcher is behind all those posts does not, in the end, really matter. As has long been the case with star image, it simply remains paramount that we believe that he is. And Twitter, more than any other new media technology, facilitates that belief.