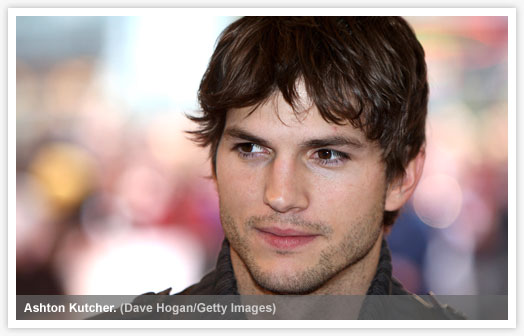 As Twitter gains popularity as a microblogging platform, it offers a complex case study for the tensions between access and branding in social media. Two recent celebrity publicity campaigns, one involving Ashton Kutcher’s bid to displace CNN with more followers, the other Kanye West’s outcry against unregulated importers on the site, encapsulate key opposing views.

Is Twitter more about access or branding? Is it used primarily as means for followers to gain greater direct access to information and entertainment – and even collective organizing for social action — via networking with other users and even celebrities outside of the constraints of traditional media? Or is it just the newest variation on mass customization marketing – of the kind Mark Andrejevic has decried as hijacking the promise of greater interactivity and access in new media in the service of corporate branding and consumerism?1 To what degree are those two agendas competing on Twitter, and which is gaining more influence? To what degree are they mutually informing?

The Kutcher Twitter challenge to CNN may not quite achieve the level of media event (of the John Fiske describes as enacting key moments of cultural change in hyperreal media spectacles).2 Yet it does serve as an early high water mark for Twitter’s ability to capture audience interest. And as a partial test case for how social media might displace traditional news outlets.

When Kutcher recently challenged audiences to follow him on Twitter rather than CNN, his stated goal was to reach a million followers before CNN, as measured by website wefollow.com, which tracks the most popular Twitter feeds.3 He campaigned via the direct video streaming website Ustream, YouTube and other new media outlets as well as via cable and broadcast television appearances on talk shows.

When he won, he argued in his Ustream videos that it was an historic moment: “This is in my opinion a turning of the tide in the way people are demanding to receive their media and entertainment.” He believes users are saying: “I would prefer to consume entertainment and news unfiltered, without having some major company decide what I get to see. I’m gonna decide that on my own. You guys are the ones deciding that and not me, because the truth is I can’t make anybody do anything. Ya’ll are deciding that for yourself.”

He namechecked Microsoft’s Don Dodge and his blog, among others, for teaching Kutcher about “the democratization of media, which is really what this is about.” In a move that perhaps underscores the one-on-one interactivity Kutcher believes new media make possible, Kutcher good-naturedly teased Ted Turner. He noted that even though Turner was a cable pioneer and “had the foresight to see that digitial media was going to be the future even before all of us believed,” as the erstwhile figurehead for CNN, he is now the old guard being displaced. Kutcher had promised to “ding, dong, ditch” Turner’s front door in Atlanta if Kutcher won. Instead, he gathered Tweeps to hand out Ding Dongs (the chocolate treat) at a Ted’s Montana Grill restaurant in Atlanta. But that was merely a diversion to enable his more spectacular ploy: his crew got on top of the CNN building and unfurled a sign of his Twitter address “@aplusk” over the huge neon CNN sign. Kutcher argued: “At the end of the day, the old guard has passed and the new guard is here. And the new guard would like to do things like ding dong ditch people just for fun.”

Kutcher’s comments on his Twitter feed indicate his awareness that he must generate quality content for his followers to consume. If the digital revolution has democratized the media, what will the users have to say? Kutcher advocates Twitter as a platform for news and entertainment shared and generated among social networks, and for raising awareness of social causes.

Yet he downplays how much his celebrity (here gained via old media) has played a role in securing his audience – and how much that audience depends on their investment in his celebrity. Here again, we see the classic formulation of the extraordinary-ordinary dichotomy Richard Dyer read in the Hollywood star system getting rewritten by interactive new media.4 Some stars welcome more interactivity around their “ordinary” existence while others provide greater access only to their branded “extraordinary” public image. Yet the production of media celebrity still drives part of the system. In his Ustream coverage of the CNN sign event, we see Kutcher brush off a fan who says he’s an extra on the Kutcher movie shooting in Atlanta; a chagrined Kutcher replies “that’s fantastic” and maneuvers away, seemingly uncomfortable that that interaction was about celebrity rather than shared social networking action.5

In spite of Kutcher’s best efforts, Twitter doesn’t achieve the “culture jamming” efforts of the Creative Commons movement or of open source technology, undertakings Christine Harold has argued persuasively deserve to be seen as alternatives to corporate consumerism.6 And one might question the depth of one-on-one interaction possible in 140 characters or less. Does it get reduced to aggregate level comments about taste and consumption? Yet Kutcher has motivated users to collective social action (such as anti-malaria fund-raising). Twitter was also famously used to save someone’s life; in 2007, followers called the police to save a suicidal Tweeter, and Demi Moore intervened and prevented another suicide recently.7 Such uses underscore the limits and possibilities of Twitter as a platform for DIY access to information and community building. 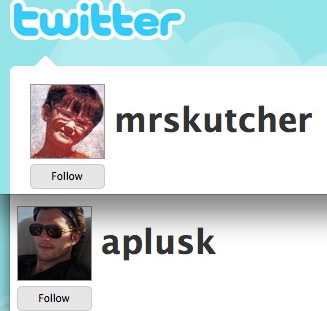 These dynamics foreground the ongoing power of media celebrity as well as the mediation of identity in the digital age. When individual followers donate to his causes, Kutcher thanks them publicly on Twitter, rewarding their humanitarianism by giving them status within his social media network. They gain temporary entry into his celebrity media world as ordinary people. Likewise, a friend’s Twitter feed about her lunch might appear right next to Kutcher’s describing his latest movie or Oprah’s recounting Michelle Obama’s visit. The microblog format assumes that every quotidinal action takes on equal meaning because it has been mediated, communicated through a media form and read by an audience.

Yet the DIY networking efforts are counterbalanced by corporate agendas and branding efforts played out on the platform. Twitter has been used by celebrities from Ellen Degeneres to Katy Perry to organize scavenger hunt style contests; followers arrive at designated locations for free show tickets (which provides built-in advertising and branding). Late night NBC talk show host Jimmy Fallon, branding his show via Internet tie-ins, gained followers for an audience member, who quickly jumped from under dozens to over 20,000 users within hours of Fallon’s televised challenge. Other stars such as Britney Spears have Twitter ghost writers approximate the narrative “voice” of the star, rendering them corporate microblogs. Blogger Guy Kawasaki, chief executive of aggregation site alltop.com, argues: “Basically, for 99.9 percent of people on Twitter, it is about updating friends and colleagues about how the cat rolled over. For a tenth of a percent, it is a marketing tool.” Yet Kawasaki himself has ghost Twitterers.8

When a Twitter feed has obviously been written by a staffer, readers can choose to follow that feed or not. But when readers don’t know who is writing it and can’t differentiate, other issues arise. When the corporate “we” tells readers to buy a certain product, it is a case of mass customization marketing. It is like the Amazon.com page that promises individualized access and preferences but really turns users into part of consumer aggregates, gathering ever more information about their consumer preferences. Such mass customization marketing is not equivalent to the ideals of democratization or media literacy.

Kanye West’s blog post about Twitter impersonation suggests the worst case scenario. Multiple Twitter accounts claim to be his, garnering thousands of followers. West argues none of these accounts are his and is outraged that Twitter does not verify or regulate who is operating them. In the Wild West of this media landscape, one often doesn’t know who is talking or what they’re trying to sell. West decries Twitter as another social networking site that is mostly a popularity contest.9
In response to such complaints, many pundits resort to a marketplace of ideas stance, insisting consumer choices determine what survives. If consumers want corporate advertising masquerading as content, they’ll have it.

As such, the Kutcher and West examples perfectly encapsulate larger public debates among pundits. They illuminate arguments on both the pro and the con sides of the digital revolution and Web 2.0 debates, from Andrew Keen’s concern about the flattening of the media landscape (the inability to distinguish between advertising and content on Web 2.0 phenomena like YouTube) to the pro positions of David Weinberger or bloggers such as Dodge convinced of the democratizing potential of the Internet.10

Leigh H. Edwards is Associate Professor of English at Florida State University. She is the author of Johnny Cash and the Paradox of American Identity (Indiana University Press, 2009). Her research interests include reality television and the family, gender and race on television, documentary, popular music and social protest, and television narrative. Her work has appeared in Feminist Media Studies, Narrative, Film & History, and The Journal of Popular Culture, and she is a Staff Writer for PopMatters, international magazine of cultural criticism published on-line at popmatters.com.