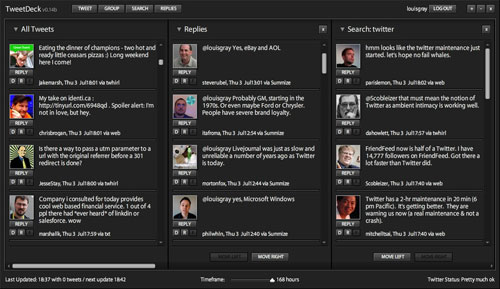 A screenshot of tweedeck – one way individuals keep up with tweets

Increasingly, our daily engagement with multiple, interlocking interfaces highlights the ways in which engagement with culture is a creative process of borrowing, decontextualizing, and recontextualizing. In this essay I will argue that forms as diverse as fanvids and twitter share the same impetus: authorship through layering, with each authorial voice a thread in an ever-growing fabric. As a medium, twitter exemplifies the prismatic processes of individual and collective authoring that have characterized the more seemingly-cult practices of fan creativity.

Lim’s vid offers a vision of fan engagement and creativity that we can recognize as resonating with larger cultural shifts. Through the intercutting and layering of iconic images and figures from Star Trek, The Matrix, Dr. Who, and V from Vendetta, to name only a few, Lim inscribes the interplay of desire and power, authorship, and investment at work when media audiences channel their viewing experiences into authorship in the form of fandom and fan communities. She captures a sense of the dynamic tensions of fan engagement through the spectacle of fleeting yet recognizable images that slip from one into the other, and upon which she writes, traces, and erases, creating a palimpsest of fan investment and display. The copyright sign shines like the bat signal over the teeming city of reused icons, signifying the way in which culture beyond fandom strives to assert control over modes of creative engagement and viewing experiences made visible through digital media and social networks.

This vid’s meaning is borne, as are all vids, out of montage, bricolage, pastiche, the collision and layering of image after image after image, recontextualized but not fully decontextualized. Each image of sequence carries with it echoes of old meanings and contexts and investments, available or unavailable in different ways to different viewers. Vids depend on a balance of constraint and creativity, bound by the source texts from which they draw and the communities within which they circulate. At the same time, they represent the radical decentralization of the media texts they use, and of the powers of authorship, breaking those texts down into new shot alignments, new collisions of visual and sound, new meanings. 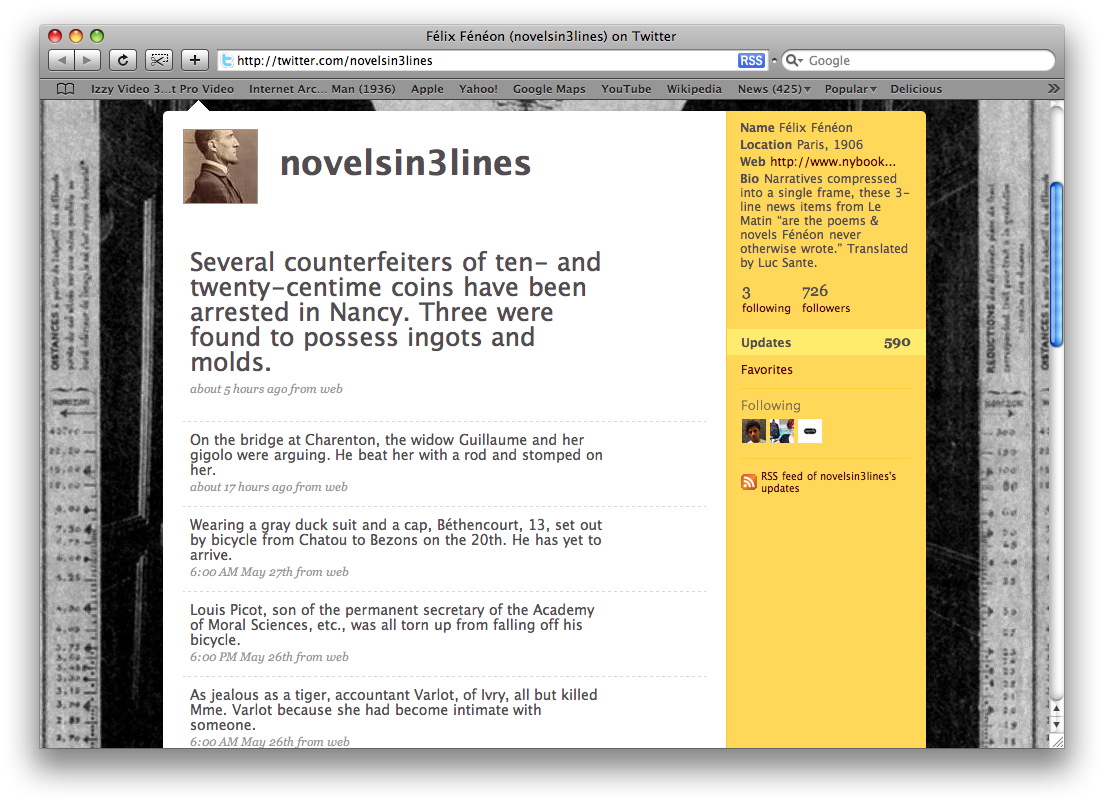 “Us” speaks to the power of this decentralization within the (albeit ever expanding) limits of fandom. The same impulse–an embrace of ever multiplying contexts and their consequent limits–characterizes the many digital social networking tools that are shaping and reshaping popular culture more broadly. Twitter offers us a potent demonstration of these shifts, of the slippage of decontextualization and recontextualization captured by “Us.” The processes of fragmentation and reunification seem built into the very framework of twitter as a medium, dependent as it is on sequences of fragments. The conceit of twitter may appear to be centered around constraint: the seemingly stringent 140 character limit defines twitter; but how that constraint plays out depends entirely on community and cultural expectations, on the layered constraints of multiple contexts. Each potential 140 characters unit forms not only a limit but also a building block, one shot in a montage, one layer in a palimpsest.

Indeed, few tweets fully maintain internal coherence within said 140 characters. Novels in Three Lines by Félix Fénéon comes to mind as, in some sense, the exception that proves the rule. These size-restricted narratives are imported to twitter from a different (limited) context, published as they were originally in the French newspaper, Le Matin, in the early 1900s. But these often grim short novels transform with the change in context, their morbidity at times undercut when aligned in the often more mundane flow of twitter, as they are juxtaposed against reports of meals enjoyed, papers graded, TV programs watched, and children picked up from school. The transformed context of reading reshapes the meaning communicated within each 140 character set. 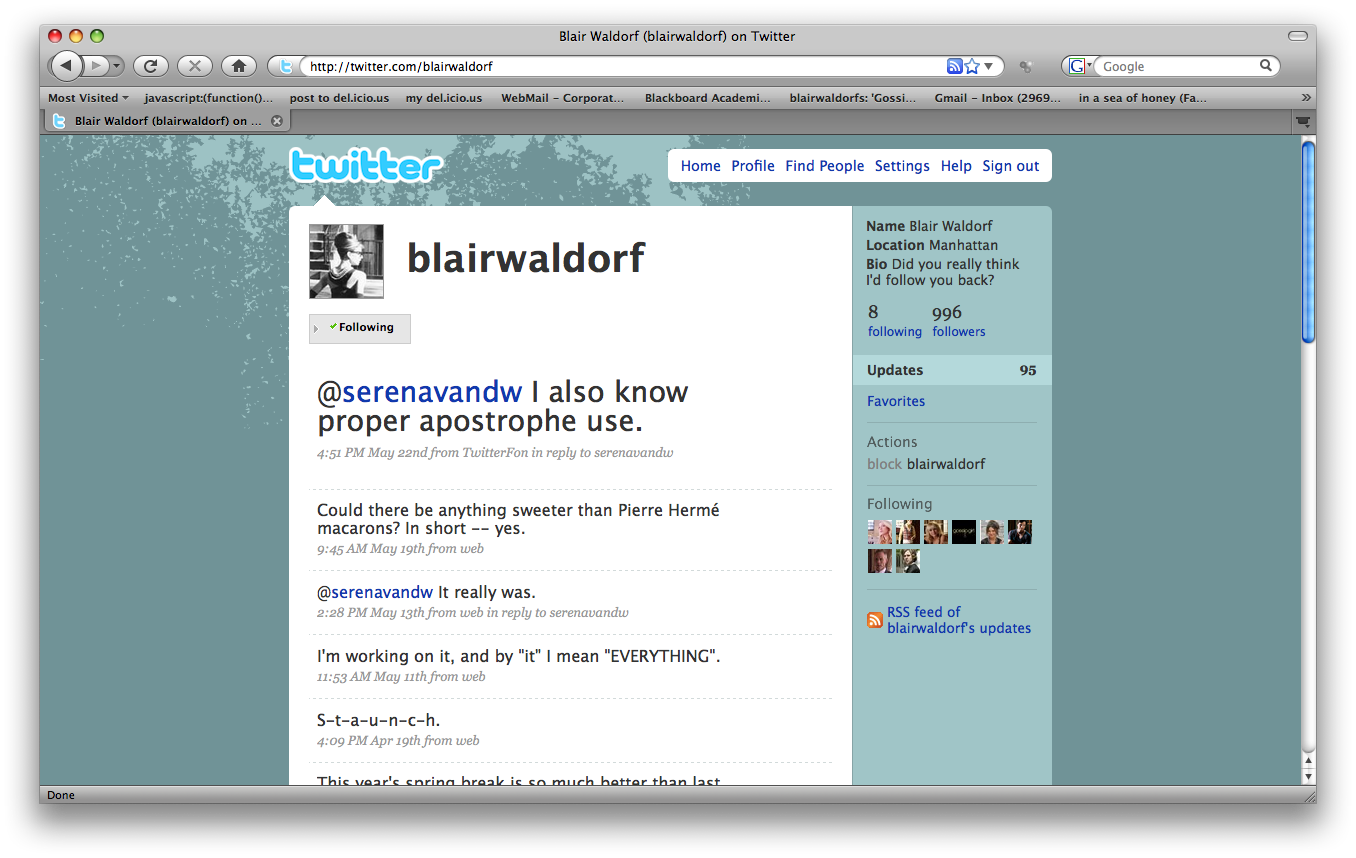 Most tweets depend upon larger context for their meaning, and thus how you read a tweet plays a key role in its production of meaning. You can read a tweet within the flow of all of the twitters you follow, or you can come to a tweet via a hashtag search, or within the flow of a given user. Or, as many first experience twitter, you may encounter tweets that have been imported into the flow of another online interface. Importing tweets to other interfaces detaches them from the microflow of twitter and reintroduces them into new contexts, into the flow of LiveJournal friendslists, blog widgets, or facebook status updates. Readers thus encounter a synthesis of layers, multiauthored at the intersection of multiple interfaces. This interplay between interfaces creates an ever-changing, decentralized landscape of cultural conversation.

I’m not, however, suggesting that the tweet-author has no control in authorship, lost to the incomprehensibility of mass authorship and decentralized interpretation. Indeed, we see authorship-control manifest in the many different ways in which people twitter sorts through a compellingly diverse range of inscription: off hand (and often illegible to others) conversations between friends, personal recordings of ephemeral moments, recordings of media consumed or reactions to other media, the inner thoughts of fictional characters (manifest in twitter role playing games), celebrities addressing fans, and fans addressing celebrities. Performances of self at the intersection of intimate and public collide in montage with listings for thrifted clothing for sale and conference notes. At the recent Media in Transition , we witnessed media academia trying twitter on for size, as conference-goers tweeted summaries and responses, lunch meet-ups and provocative questions, and then in the aftermath sifted through the results to see what what representations of conference conversation remained.

Twitter offers collapsible, malleable, and contradictory layers that slip through our fingers like liquid, but like glue map connections between more seemingly internally-coherent interfaces like LiveJournal and Facebook. Like the vid “Us,” individual tweets and the flow of twitter offer enriched readings when understood within context, and yet also stand alone as captivating glimpses of creative expression through digital media. And like “Us,” twitter makes visible the robustness and emergent nature of spectatorship, as spectators become authors, orchestrators, and conductors of digital media flow.

Louisa Stein is Assistant Professor of Television, Film, and New Media at San Diego State University. She is co-editor of Teen Television: Essays on Programming and Fandom. Her current book project is entitled Millennial Noir.