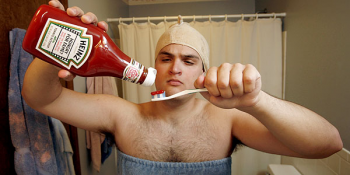 It is an argument that has become familiar and commonsensical: As technologies, such as digital video cameras, become more widespread, and as the performance of these technologies continues to improve, more users have the opportunity to create media content of professional caliber. With the Web, too, this user-generated content can be shared quickly and easily with the world. Companies have begun to capitalize on this concept and on the assumption that millions of heads are better than one when it comes to producing advertisements. If consumers are increasingly tasked with producing advertisements, then companies are able to cut their operating expenses while still persuading people to keep consuming. But will there be a benefit for audiences in this process? Will the collective of diverse consumers produce innovative commercial content that breaks from the racial stereotypes, talking babies, and slapstick humor of traditional advertising, or will we see more of the same? Though user-generated advertising has immense promise to break the mold, it has yet to do so.

In 2006, Doritos launched the Crash the Super Bowl contest. This contest asked everyday people to create television ads promoting its chip brand, and to upload these ads to a Doritos Web site. Doritos provided its users with tools for creating the commercials, including production shots, logos, music, and sound effects. The public was asked to vote on a handful of finalists chosen by Doritos, and the winning commercial was aired during the coveted and expensive 2007 Super Bowl broadcast. Eventually, all five finalist commercials aired on television. The finalists of the 2006-2007 contest received $10,000 and a trip to Miami for a private Super Bowl party. Doritos has continued the contest, airing user-generated submissions once again during the 2009 Super Bowl broadcast. This time around, finalists each won $25,000.

The top-down contest format, mixed with the open creative process and peer-voting, means user-generated advertising projects function on the crowdsourcing model. Crowdsourcing is an online, distributed problem solving and production model that drives enormously successful companies like Threadless, InnoCentive, and iStockphoto, as well as some online contests, including the Crash the Super Bowl contest and the Goldcorp Challenge.123 At its heart, crowdsourcing is the broadcasting of problems in the form of an open call to an online community, and it assumes that casting such a wide net will tap the collective intelligence distributed among the Internet’s millions of users.

Crowdsourced advertising is promising for companies. At its best, crowdsourced advertising can reduce companies’ costs, driven by the amateur creative contributions of a product’s fans. Awarding even sizable prizes to individuals who win crowdsourced advertising contests would still undercut the expense required to hire professional advertising talent, and money may not even be the primary motivator for people who submit to advertising contests. Brett Snider, co-creator with Billy Federighi of “Mousetrap,” one of the five finalists in the 2007 Crash the Super Bowl contest, noted that while the prize money was nice, it “isn’t that much money”.4 Snider said that he and Federighi are “doing whatever it takes to get some recognition,” with hopes of being “signed by a production company” as a result of the exposure.

At its best, too, crowdsourced advertising holds the potential to creatively outperform the ad minds of Madison Avenue. Several studies at InnoCentive, a crowdsourced scientific research and development company, indicate that experts in a given area are often outdone by people outside of a domain of expertise.56 And the consistent success of crowdsourced t-shirt design company Threadless, which draws its design ideas from a crowd of amateur illustrators, challenges the notion that any in-house team of professional designers could do better. Professional advertising firms are always, to some extent, removed from the customer base advertisers are trying to reach. To draw persuasive messages from the very audience one is trying to persuade is an ultimate form of marketing research. In theory, customers know what they want, and in practice, the goal with crowdsourced advertising is to get customers to produce it in the first place.

Allowing users to create ads comes with its own set of risks for companies, though. For its 2007 Tahoe, Chevrolet tried a user-generated advertising experiment. Chevy’s intent was for visitors to its Web site to create customized ads with the stock video clips and text generator it provided, and to circulate the ads around the Web, virally. Instead of praise, many of the ads users circulated turned Chevy’s experiment on its head. Visitors to the site took the opportunity to create commercials to “skewer everything from SUVs to Bush’s environmental policy, to, natch, the American automotive industry”.7 Chevy was wise not to try and fight the viral power of the Web and attempt to remove the satirical ads from its Web site, noting that “it’s part of playing in this space”.8 These moments of resistance are important, for they illustrate that consumers do not always have to play along with what companies want them to do. The Chevy Tahoe case shows that the customer is really always right, and that they do not have to be cultural dupes all of the time. Though crowdsourcing companies control the process, they do not control the crowd. Just as the Web enlarges the ways companies can sell themselves to consumers, so too does the Web enlarge the opportunity for consumers to resist.

A contrary take on the Tahoe

Heinz tried a user-generated ad contest in 2007, inviting users to submit videos promoting its ketchup. Heinz received a flood of submissions, and most violated the contest’s technical requirements, were of poor quality, or made the product seem unappealing. Heinz’s own employees waded through the pile of submissions in hopes of finding the best commercials, at a considerable cost to the company. The problem with this approach, as Louise Story wrote in the New York Times, is that the crowdsourced contest ended up being just as costly as hiring a professional advertising firm, if not more.9 The irony with crowdsourced advertising is that companies must still spend considerable amounts of money with advertising agencies to promote the contest itself. In the end, though, Heinz’s mistake was that it broke from the underlying principle that makes crowdsourcing work: “the crowd finds the best stuff”.10 Heinz should have designed more specific, rigid technical parameters to help automatically weed out ineligible submissions. Then, Heinz should have turned the vetting process of submissions over to the crowd that made the ads in the first place. The magic of Threadless, for instance, is that users who will eventually purchase the t-shirts are involved in the selection of the designs that get printed. Crowdsourced advertising must better maximize the crowd’s ability to select for itself what ads it thinks are best for promoting a product. Turning control over to the crowd can greatly reduce a company’s costs involved in running a user-generated advertising contest.

Crowdsourced advertising is likely to flourish as more companies try to connect with online communities and adopt new methods for getting creative input. The lessons learned from the failures of Heinz, Chevy, and other campaigns shed perhaps more light on the logic of crowdsourcing and the creative (and resistive) capabilities of online communities than on the concept of advertising itself. Good ideas and clever persuasive techniques will remain a constant core of advertising. What will change with the proliferation of new media technologies and the Web is the arsenal of techniques companies will employ to tap the creative talent of consumers as a supplement to traditional, top-down ad campaigns. User-generated advertising methods hold immense promise to produce new ideas at reduced cost, even outperforming professional advertising firms. To make this happen, though, companies will have to learn to let go and let the crowd do the heavy lifting.