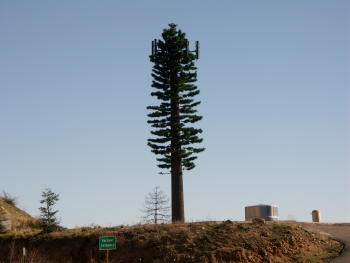 Communication infrastructures are frequently visualized as flow diagrams that are designed to approximate the spatial relations of a network. As a result, there is a tendency to overlook the uniqueness of particular nodes in a network, whether their physical form, the stories of their development, or the practices which surround them once they are activated. The antenna tree, I want to suggest, represents the potential to develop a more node-centric and materialist approach to the study of infrastructure. As a cell tower disguised as a tree, the antenna tree draws attention to the materiality of infrastructure in the very process of trying to conceal it. People often chuckle at the sight of these uncanny objects that have been designed to soften the severity of the steel tower with botanical plastics. This tower in disguise not only relays signals, but it is implicated in an array of industrial, legal and socio-cultural relations. Each antenna tree can be understood as a symptom of processes of fabrication and installation, state and local regulation, community deliberation, and spatial transformation. Thinking around the antenna tree, then, involves considering the fields of negotiation that are produced as an effect of infrastructure development and placement.

In this column, I explore what is at stake in hiding infrastructure and how such practices may end up trading technological awareness for a highly synthetic version of “nature.” By disguising infrastructure as part of the natural environment, concealment strategies keep citizens naive and uninformed about the network technologies they subsidize and use each day. We describe ourselves as a “networked society” and yet most members of the public know very little about the infrastructures that support such a designation – whether broadcasting, web or wireless systems. This issue of infrastructure literacy becomes more prescient as we enter an era of ubiquitous computing in which many different kinds of objects and surfaces will be used either as relay towers and/or web interfaces. 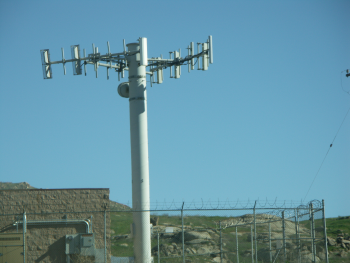 Cell tower concealment began in the US during the early 1990s as wireless carriers installed new infrastructure in cities across the country. These coverings or concealment strategies, as they came to be known, were marketed as a way of disguising unsightly towers that were installed in the midst of urban and suburban areas. As cell towers sprouted up, citizens groups nicknamed NIMBY’s (not in my backyard) formed in communities across the country to protest tower installation especially in residential districts. Such groups expressed concern not only about neighborhood aesthetics, but were worried about potential health risks since the federal government authorized tower installation without conducting trials to assess their effects on people living in their vicinity. Others feared that cell tower installation near their homes would reduce property values. By 2005 there were at least 500 formal complaints filed in communities across the US protesting cell tower installations. Some communities (such as Redmond, Washington) passed ordinances mandating the concealment of towers installed in residential districts and Connecticut created a Siting Council to regulate cell tower placement throughout the state. 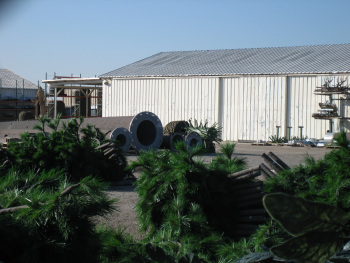 The opposition to cell tower placement was not limited to residential areas. One of the most controversial installations occurred in Yellowstone National Park. In 2001 Western Wireless Corporation mounted a 100-foot cell tower in close proximity to the beloved geyser Old Faithful. After the installation, it was impossible to look at the geyser without seeing the steel cell tower looming in the distance. In 2004 the environmental organization PEER (Public Employees for Environmental Responsibility) filed a petition trying to have the tower near Old Faithful removed stating that it was illegally installed and done without public comment.1 When Congress passed the 1996 Telecommunications Act it authorized the construction of cell towers on federal lands. Cell tower installations have occurred in other national parks as well, and wireless corporations provide funds to the National Park Service by leasing these lands. For instance, Western Wireless pays $12,200 to the National Park Service each year to lease the land on which the tower near Old Faithful sites.2 A side effect of the 1996 Telecom Act is that private wireless carriers now provide operating revenue to the National Park Service.

The installation of cell towers raises fundamental questions about the control of property, whether on the ground or in the spectrum, in neighborhoods or national parks. The cell tower only gained public attention when installed in the “wrong place”—that is, when it was perceived as violating the sanctity of a nationally protected forest or a valued neighborhood. Such controversies are useful in that they draw public attention to infrastructure sites and their relation to social, economic and environmental issues. Wireless infrastructure is defined not only as the capacity, as advertisers would have it, to speak on a phone “anytime anywhere”; it involves the (re)allocation of publicly-owned natural resources, the installation of new equipment on private and public properties, and the restructuring of lifestyles and communities. 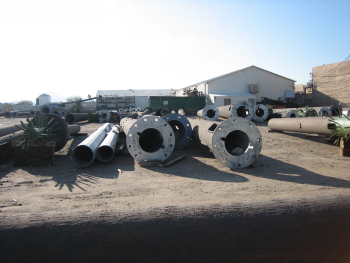 Antenna trees without their greenery

Given the controversies that emerged around cell tower installation, manufacturers and wireless carriers resorted to the use of camouflages as a way to appease NIMBY and environmentalist groups. Increasingly, owners have concealed the technology in an effort to mitigate complaints. Larson Camouflage based in Tucson, Arizona devised the first “tree tower” in 1992. Since then other companies with names such as Steel in the Air, SpectraSite, Clearshot, Crown Castle, Treescapes, TeleStructures, and Pinnacle Towers formed and have sold and installed so-called “stealth towers” designed to look like different tree species, flagpoles, church steeples, mosque minarets, crosses, and grain silos among other things. One company customized a tower to look like an osprey nest. Another sells a “lightning tree” designed to look like a stump struck by lightning. These tower get-ups can cost up to $200,000, and securing permission for their installment can require elaborate planning and meetings with property owners, community groups, local political officials and representatives of wireless corporations.

With the globalization of wireless telephony, similar firms have emerged in different parts of the world that specialize in the international distribution of tree tower coverings. For instance, Envirocom, based in Gauteng, South Africa, sells antenna trees to clients in Uruguay, Brazil, the US, Portugal, France, the UK, Holland and Turkey. And the Turkish company Preserved Palm, based in Ankara, has signed deals with clients in Dubai, Saudi Arabia, Qatar, Egypt, United Arab Emirates, Moldova, Kazakhstan and Germany among others. A global industry has formed to conceal wireless infrastructure and these new products have been installed in different sites for different reasons. Given this growing trend, we might ask what is at stake in this concealment? When technologies remain hidden or obscure they remain beyond public concern. Only when cell towers became visible in neighborhoods and national parks did citizens take an interest in them and their effects. Most people notice infrastructures only when they are put in the wrong place or break down. This means that public knowledge of them is largely limited to their misplacement or malfunction. 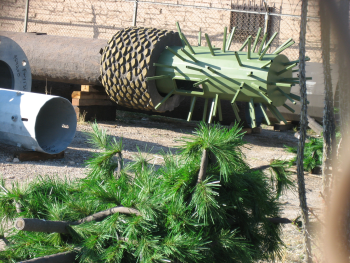 Antenna tree ready to be planted

While concealing infrastructure sites may be a viable aspect of urban planning (as has long been the case of sewer, electricity and water systems), one of its effects is to keep citizen/users naive about the systems that surround them and that they subsidize and use. Because of this, it is important to devise other ways of visualizing and developing literacy about infrastructures and the relations that take shape through and around them. Are there ways of representing cell towers that will encourage citizens to participate in sustained discussions and decisions about network ownership, development, and access? What is it about infrastructure that is aesthetically unappealing? What form should infrastructure sites assume? Should they be visible or invisible? 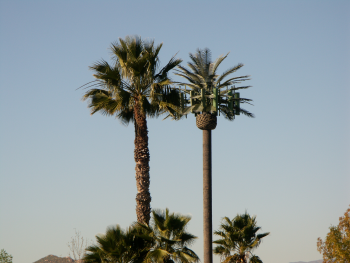 While manufacturers and carriers have devised ways to conceal cell towers, some artists have created works designed to draw our attention back to them. German photographer Robert Voit has exhibited a series of photographs entitled “Enchanted Wood” that were taken between 2003 and 2005 in the US, Great Britain, South Africa, Korea, Italy and Portugal. The photos draw upon the conventions of landscape photography and scientific illustration to present an inventory of cell towers that have been camouflaged as different tree species in different settings. Each photograph represents an antenna tree in isolation, whether cactus, pine, palm or cypress, as well as the environment surrounding the tower whether a desert floor, grassy field, parking lot, or mobile home park.3 The photos work to expose an infrastructure site that has been carefully designed to blend in with the environment, while also subtly alluding to the imperceptible signal transactions that traverse geophysical and electromagnetic territories.

The politics of infrastructural invisibility that take shape around the antenna tree involve citizens’ concerns about neighborhood aesthetics, health and property values, environmentalists’ protection of national parks, global corporate enterprises, and artists who challenge us to reflect upon the contexts and effects of infrastructure concealment. Though these groups are situated around the antenna tree in different ways, they all draw attention to and help to generate dialogues about it. Perhaps the ultimate irony of the antenna tree is that it actually exposes more than it hides and in this sense can be thought of as a site for generating further public knowledge about the materiality of wireless and other network systems. We are socialized to know so little about the infrastructures that surround us, even though many of us use mobile phones each day. Would our experience of mobile telephony change if we knew more about the architectures of signal distribution? It is difficult to say, but we certainly would have a different relation to the technology if we understood it as something more elaborate and expansive than something that rings in our purse or vibrates in our pocket. The emergence of wireless telephony has involved the sale and lease of public and private property, the allocation of space in the electromagnetic spectrum, the redefinition of urban, suburban and rural environments, and the alteration of patterns of daily life. By thinking around the antenna tree, perhaps it is possible to begin cultivating new critical approaches to the study of infrastructure and its relation to cultures of everyday life.