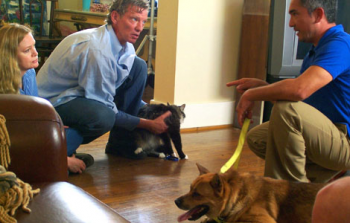 Camera moves low to follow Cesar teaching how to get a dog to accept the family cat.

When first introduced, the problem dogs on The Dog Whisperer attack other animals, bark, pull on a leash, eat things that make them sick, and snap at and bite spouses or children. They won’t obey. Their behavior elicits identification from any viewer who’s known an out of control dog. In this way, the show offers the same viewing pleasure as Supernanny or Tabitha’s Salon Makeover, playing off the schadenfreude of seeing people in dire situations against the comforting narrative closure of an authoritative figure’s setting things right.

The Dog Whisperer himself, Cesar Millan, has unique personal qualities that shape the show. Since, as he puts it, both dogs and he live in the present, he’s a master of the cold read. That is, he comes into a house and sizes up the situation with both owner and dog largely on the basis of body language and a few questions. Furthermore, since one of the viewing pleasures of the show is seeing dogs behaving badly, we get reassured that no dog is incorrigible. Mexican-born Cesar emerges as a man who would be considered truly macho in South America, that is, a caring patriarch who wants to understand and nurture all those in his charge.

There are different approaches to dog training and Cesar’s methods have raised some controversy. In countries where people commonly have pets, they hold to an affectionate model of companionate animals but, in fact, may also displace their emotional needs and project them onto those pets. Many of the owners with “bad” pets on The Dog Whisperer fall into this category, so Cesar’s stated goal is to rehabilitate dogs and train people. His own view of animal psychology comes from working with dogs as a farm boy in Mexico; there people saw themselves as working with Nature but that animals were different from and of a lower order than humans. Thus Cesar assumes that dogs need to live in a stable, balanced, hierarchical pack and that humans with dogs need to become calm, assertive pack leaders. 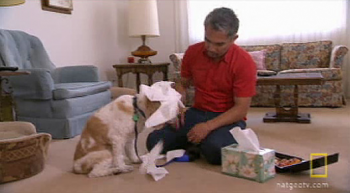 Low angle shot of Cesar trying to desensitize a cocker spaniel, Patches, from the Kleenex that she loves to eat.

The Dog Whisperer is of interest to television scholars because it is a highly successful series, now in its fifth season, and the principal moneymaker for National Geographic Channel. In addition it uses a somewhat different production process from other reality TV shows, especially those which take place in an everyday environment. Other shows often use a format structure that establishes a time frame, certain kinds of activities, and a predictable set of events. Economically the standard format allows producers to do efficient preplanning and camera crew to have a “book” that establishes certain setups and likely shot sequences, including moments to do interviews, film group interactions, and have the participants move around specific parts of their environment. Because the crew has to shoot for editing, they also do also wrap-up interviews and elicit summary statements from the participants to provide closure to the episode’s story arc.

Although The Dog Whisperer‘s producers vet potential dogs and owners through a traditional process of videotaped auditions, Cesar does not want to follow any pre-established routine during the filming of the show. He also does not want to know about the dogs or owners before he visits them and never does a second take. He insists on going in cold, unless there’s potential danger facing the crew. For the camera operators it’s gun and run, with little time for prepping on location. Filming one episode takes about a day and a half, and the procedure is as follows. The crew films the dog acting up; they interview owner and family, usually one at a time. Cesar is filmed driving up and entering the house, and then he has a conference with the family, usually with the dog sitting beside them. He asks a few questions and at that point often does not pay much attention to the dog. Then he usually does something to elicit the canine’s problem behavior. Often then he will just stand erect and raise the palm of his hand to the dog, saying, “Tsst!” and the dog backs off or ends its bad behavior in five to ten minutes. That’s the amazing part.

Cesar rarely criticizes the people he visits for their neurotic behavior that we, the viewers, might see as obvious. He just teaches owners how to treat their dogs as dogs and to start thinking about what dog psychology and dog needs might be. He insists on a dog’s need for daily, disciplined, strenuous exercise. Often he takes the dogs out for a walk and shows the owners how to get a dog’s correct behavior on a leash. Sometimes Cesar takes dogs and owners to his own canine pack in his Dog Psychology Center, where about twenty to forty dogs wander about calmly in a large enclosure. He believes in the rehabilitative power of introducing problem dogs into a balanced pack since he evaluates a dog’s individual psychology according to more general ideas about dogs’ instinctual and social formations. 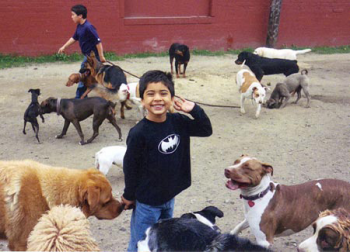 Cesar’s sons in the Dog Psychology Center where most dogs roam freely in a canine pack.

Significantly, it is Cesar’s televisual presence that makes his show a success. This happens in a number of ways. First, in visual terms, he asks viewers to look at aspects of the environment, human gestures, and animal movements of the smallest sort as a dog might. This kind of visual signaling provides cues for production people around which to shoot and edit individual programs and also provides an aesthetic pleasure for viewers, who can reinterpret everyday environments to see them anew. Second, Cesar himself has a trained, performative body language that in itself is instructive about how he handles dog. His bearing and movement are a delight to watch. He studied judo in Mexico for eight years as a child and won championships in it; he uses that training now to control his core movements and center of gravity so that he can be calmly erect or stoop gracefully or turn suddenly to match a dog’s quick movements. The camera crew is used to filming low angle shots as he moves down to a dog’s level or to follow him rapidly as he runs or skates with inline roller blades to exercise a dog. Since much of his training philosophy is about the human as a calm and assertive pack leader, his physical bearing embodies his ideas.

Visually, each episode has visual interest because Cesar takes the dogs into different environments—bedroom, backyard, street, or his own dog pack at his dog Center—according to the training he thinks dog and owner need. Some of this is spontaneous: “Let’s start outside first.” And some would need time to plan, such as taking the dog to the Center. But at the Center, the movement of dogs and people is still somewhat spontaneous and unpredictable as owner and strange dog move into this new world. In addition, sometimes Cesar has visitor dogs brought to an owner’s house, either members of his pack or some neighbor’s dogs. I mention these variations because they are not formulaic but very much tied to Cesar’s ideas about training and related to a dog’s problems already introduced with the episode itself.

The producers are savvy about what the show needs. Often a process interview is taped with Cesar during or after the dog/owner training session in which he explains what happened, how and why he did what he did, and how that ties in which his dog rehabilitation philosophy. He seems to understand television’s needs for succinct wrap ups and is able to provide those. Not only are such comments edited over visuals of the training process itself, the editing also incorporates a limited use of anonymous voice over narration to introduce segments or provide narrative glue, and addition of music to provide a kind of tension or narrative reinforcement. 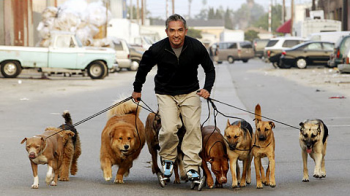 Cesar rollerblading while exercising his pack.

All the material gathered in production is used across various media, including books. Convergence culture has made Cesar a profit, and if we take time to look at his corporation’s use of this material, it is fascinating to see individual Dog Whisperer episodes used in so many ways. However, it is Cesar’s effective televisual presence that establishes the credibility of his methods. We don’t really know if the dogs continue to act well after he’s been gone for a few weeks. But viewers of his show can all remember how many of those dogs settled down just a few minutes after he came into a home. Each episode with a problem dog skillfully weaves together Cesar’s presence and the fascinatingly bad dogs and owners in need of training. Each case is developed according to little narrative arcs, so that the episodes are then ready to be re-edited into compilation episodes (Cesar’s Worst Cases, The Power of the Pack, etc.) and Internet video clips, prominent on National Geographic’s web site, YouTube and Cesar’s own training videos. The show’s success has led to expanding business opportunities for Cesar Millan Inc. here and abroad, such as dog training books, DVDs, seminars and also an 100-product line with Petco. The lesson here is that by virtue of effective marketing and multimedia outreach, The Dog Whisperer has become worth its weight in gold, but all that may depend upon an irreplaceable element, that is, the unique onscreen televisual presence of Cesar Millan.

Image Credits:
1. Camera moves low to follow Cesar teaching how to get a dog to accept the family cat.
2. Low angle shot of Cesar trying to desensitize a cocker spaniel, Patches, from the Kleenex that she loves to eat.- Author Screenshot of The Dog Whisperer
3. Cesar’s sons in the Dog Psychology Center where most dogs roam freely in a canine pack.
4. Cesar rollerblading while exercising his pack.