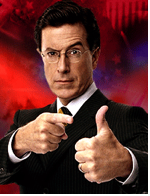 And yet, how active was this activity when the audience still had no say in the text being created (Morley and Silverstone, 1990)?1 Indeed, we are left with only a semblance of an active audience.2 Today however, the concept of the active audience is being redefined through the Stephen Colbert character and the innovative programming on The Colbert Report. Extending the concept of interaction, The Colbert Report encourages an improvisational space of creation where the audience is not only spectator, but text/content creator as well. Such improvisational reliance requires not only the host, Colbert, for its success, but the audience as well.