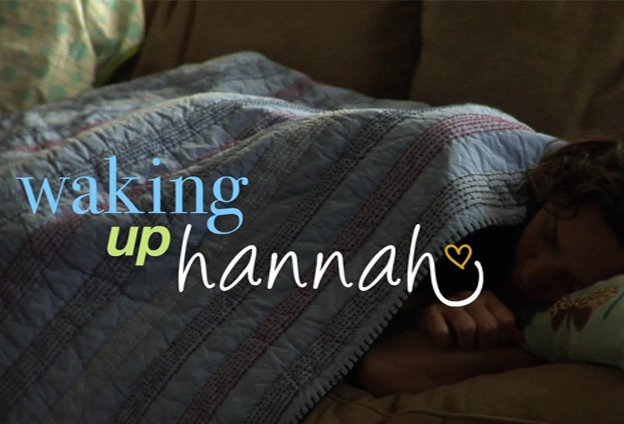 Two years ago I attended NATPE’s annual sales exhibition and conference. As the event wound up and I skimmed through my notes, I realized that a week’s worth of industry discussion could be summarized in the phrase “monetize your brand.” The dominance of the term monetization, across a wide range of panel presentations, reflected the extent to which television executives are struggling to sustain the commercial structure of program production and distribution in an era of channel proliferation and multi-platform delivery systems. This is not a new concern. Global advertising markets have decreased steadily over the past decade, due in no small part to the fragmentation of audiences that marks the post-network television era. The relatively uncharted territory of online programming has only served to heighten the prevailing sense of uncertainty in the industry. Thus, panelists debated new forms of audience metrics and establishing value chains across traditional channels, Internet windows, and DVD extras as strategies to attract advertisers back into the fold. In the end, it seemed that old methods were being applied to radically new circumstances and I left with the lingering impression that advertisers, themselves, would initiate changes in the relationship between content and commerce in the new media environment. Recent developments seem to support this notion.

With little contextualization beyond a voiceover declaring: “you decide what type of day Hannah will have,” viewers might easily presume that Waking Up Hannah (WUH) was a network-produced video venture into interactive programming. However, upon entering the site, audiences/visitors(?) are greeted with the iconic symbol for Dove soap and invited to start the “film” and navigate to their own conclusion. WUH opens with the lead character partying with friends at a nightclub. The next morning, a hung-over Hannah wakes up on her sister’s couch realizing that she has lost her purse and house keys. She has, however, managed to hang on to her cell phone, which provides her with pictures that jog her memory of the previous night’s events. In a study in contrasts, the free-spirited, 20-something Hannah banters with her straight-laced older sister — a stereotyped uber-mom — as she makes her way to the bathroom where visitors are introduced to the rules of the game. We learn that Hannah has a blind date later that day and that her progress to that important meeting will be determined by the type of Dove body wash the visitor selects for her use. 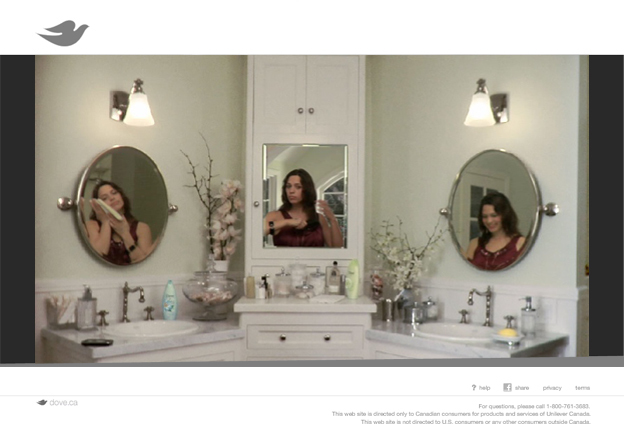 Choose a mirror, choose a narrative.

Unfortunately, Hannah’s demanding boss has other plans for her Saturday afternoon. He calls her into the office, ensures that she is sufficiently overloaded with work, and puts her at risk of missing her date. Hannah will, indeed, meet her mystery man but how will she respond after a frustrating day with the boss? Will she be refreshed and daring (choose the blue body wash); will she be relaxed and “chilled out” (choose the green body wash); will she be energized (choose the yellow body wash)? No spoilers here as there are seven possible endings to the “film.” Visitors are offered several interactive options to further immerse themselves in Hannah’s world and influence the story’s direction. Remember her cell phone? Click on Hannah’s iPhone and read her text messages, listen to her voicemail, or perhaps peruse her photo album. The centrality of the iPhone in WUH is one of the more jarring elements of the campaign as it presents what might be the first case of product placement in an advertisement for another company’s product line. On a marketing level, however, it is a brilliant moment of synergy in addressing the target demographic. The iPhone’s invocation of the “PC-Mac guys” commercials reinforces the generational divide between Hannah and her stodgy sister and further hails “20-something” women to identify with Dove’s protagonist. 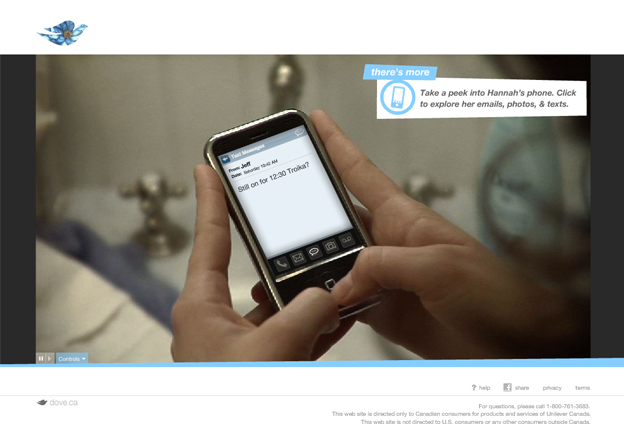 While WUH provides a wealth of material with which to deconstruct contemporary advertising and consumer culture, I am more interested in questions of classification and the implications of this form of branded content for media studies. Although it is difficult for me to view WUH as anything more than an interactive commercial, the media and trade press consistently define it as a “film.” If I was inclined to nitpick here, I would argue that aesthetically and narratively WUH more closely resembles a television pilot (replete with Hannah’s Carrie Bradshaw-esque voiceovers narrating her discovery of the importance of inner strength and beauty). Of course it is not actually on television and as it provides a (somewhat) self-contained story world, it might be described as a film. WUH was created by advertising agency Ogilvy and Mather Toronto in partnership with the digital production company The Barbarian Group. The “film” is a significant component of Unilever’s — Dove’s parent company — $4 billion advertising budget and commitment to expanding the company’s digital presence.1 According to Rob Master, Unilever’s North American media director, digital is no longer an “add-on” for the corporation but rather a “centerpiece for innovative online programs rich in storytelling with a focus on consumer engagement.”2 Unilever sees WUH as a major success story evidenced through the 120,000 hits received in its first month online.3 If the blogosphere is any indication, the “film” has resonated with some members of the designated market:

“Being a woman in her twenties … I have to say that I am completely impressed by this! I feel like the main character is living my life … Dove is showing us it’s okay to have bad days, Its fine to have money/boyfriend/beauty pressures (sic). In the end it all works out and they portray it in a very fun and interactive way …. Kinda reminds me of that movie with Gywenth Paltrow where there are two storylines (sic).”4

I should note my own skepticism in skimming the blog responses for this campaign. Given the extent of viral marketing for WUH, I question the “location” of posters particularly given that the vast majority of reactions to the campaign appeared on marketing publication sites. It’s interesting to note that the sole poster (‘girly’) on the WUH discussion forum stated: “do you like the film? I didn’t that much.’ 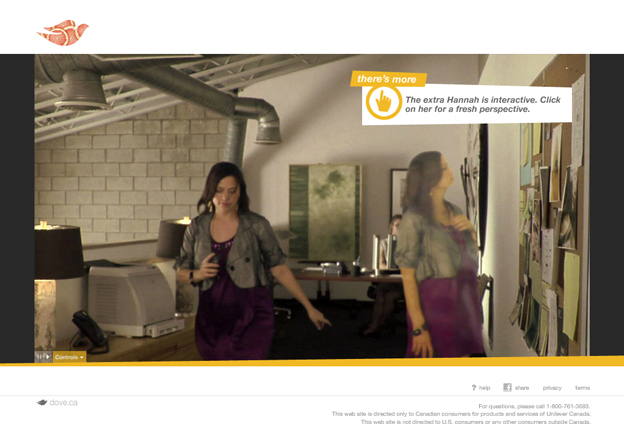 Click on Hannah’s translucent doppelganger to change the narrative.

WUH is not the first, nor most recognized, case of digital brand entertainment. Indeed, BMW claims to have developed the phenomenon of online films with its 2001-2 series The Hire — eight brief action-adventures starring A-list actor Clive Owen as the lead character “The Driver.” Each film was directed by a critically acclaimed director including Ang Lee, Guy Ritchie, Ridley and Tony Scott, and Wong Kar-Wai, to name but a few. The Hire went viral on the Internet and eventually gained further distribution via DVD and satellite. It can still be viewed on YouTube. The Hire proved such a success for BMW that the company now has a television and new media arm (BMW Films) and has further developed the series into a limited-run comic series with Dark Horse Comics.5)

Without resorting to an “Adorno and Horkheimer were right” conclusion (although I can’t help but hear them laughing), what are we to make of a digital trend in storytelling that completely dissolves the arms-length distance between art and commerce. Moreover, what are the implications of manufacturers bypassing the middlemen (i.e. TV and cinema) and producing their own stories.6

Is this a new genre and does it establish new boundaries between high and low culture? For example, it is not difficult to forget the car is the focus of The Hire given the creativity brought to bear by the individual directors. Conversely, WUH appears to be a variation of Raymond Williams’ depiction of the “magical system,” wherein the product mystically transforms the life of the central character. In an excellent overview of the utopian and dystopian visions of interactive television, Boddy cites a product placement broker’s prediction that “’single advertising shows’ where sponsors produce their own TV programs and integrate their products into the dramatic content” are “right around the corner.”7 WUH and The Hire suggest that we’ve turned that corner, digitally speaking at least.