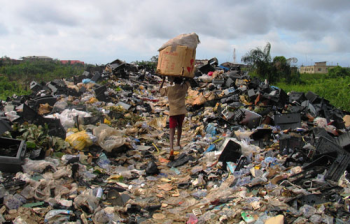 In a 2005 Flow article, Christopher Anderson directed readers’ attention to General Electric’s cynical policy of “ecoimagination,” a word invented as part of US$90 million in product development that included advertisements with trees growing from smokestacks and a computer-generated elephant dancing around a rain forest. The backdrop to this was that GE, which owns NBC-Universal, holds the record for polychlorinated biphenyls (PCBs) dumped into US waterways. This essay raises environmental questions that media studies needs to address in hopes of encouraging further research into the ecological context of media technologies and their environmental impact.

The greening of industrial strategy was not invented by GE’s PR campaign. Ever since the 1970s, “clean” information-based technologies run by “knowledge workers” have been pegged as crisis-proof replacements of the “old” economy. Increasingly, the high-technology service and cultural industries of the “new” economy are constructed as a post-manufacturing utopia for workers, consumers, and residents, where the by-product is code, not smoke. Corporations have waged green campaigns ever since European regulators, international treaties, and mounting public opinion began to challenge US businesses to address global warming and other environmental ills.

Meanwhile, media companies managed to avoid becoming the target of environmentalists. That is, until the problem of electronic waste (“e-waste”) began to tarnish their reputations. E-waste is shorthand for obsolete and discarded electronics (computers, cellphones, TVs, etc.). Concern with electronic waste and its disposal and/or recycling has grown since the 1980s thanks to activist groups like Greenpeace and the Basel Action Network (BAN). The transborder movement of hazardous waste was prohibited under Basel Convention of 1992, while e-waste became the specific subject of restrictions imposed by the 2002 EU Directive on “Waste Electrical and Electronic Equipment” (“WEEE”). In 2002, BAN published its report, Exporting Harm, on the global inequities of e-waste trade and recycling. Since then the term e-waste has stood for environmental hazards associated with the end-life of electronic media technologies (Smith et al.1; Grossman2)

Pollution from today’s electronic media includes such highly toxic contaminants as trichloroethylene, a probable carcinogen that can enter groundwater, pass into soil, then return to waterways, and heavy-metal sources like lead, zinc, copper, cobalt, mercury and cadmium. About 70 percent of heavy metals in the world’s landfills are e-waste. In 2004, the Political Economy Research Institute’s report, Misfortune 100: Top Corporate Air Polluters in the United States, had media owners at numbers 1, 3, 16, 22, and 39. 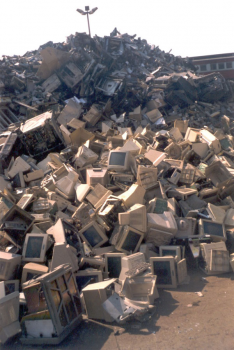 CRT monitors at a recycling facility in South Africa

Yet the propaganda of the media industries as post-smokestack, green industries that are less reprehensible than old-school manufacturing continues to color media studies. In fact, there is not a single substantial work within our field that responds to environmental concerns. While Hollywood celebrities added their ‘carbon footprints’ to the list of enviable personal traits—small was finally fabulous—and the Ecorazzi (paparazzi on the eco-celebrity beat) obliged with non-stop coverage, the industry as a whole met with no critical scrutiny—unless you include the friendly needling of trade and popular press reports (see also the Environmental Media Association). There is growing interest in e-waste, in particular the problem of discarded television sets and computers (Sterne3; Parks4; Ellis 2007: 217-19; Maxwell and Miller5; Miller6 ); but media, communication, and cultural studies have otherwise failed to document or even hint at the existence of an ecological dimension to media technologies themselves. Is this the elephant in media studies’ living room?

Over 80 percent of electronic scrap is being exported to the poorest quarters of the world. A hundred thousand PCs entered the port of Lagos, Nigeria, each month in 2006 — 75,000 of them unusable other than as scrap. California alone shipped about 20 million pounds of e-waste last year to Malaysia, Brazil, South Korea, China, Mexico, Vietnam and India. Across the US, perhaps 60 million PCs and their detritus are seeping through our own landfills or being burned in incinerators, while the transition to exclusively digital broadcasting in 2009 will see an e-waste avalanche of 270 million outdated analogue TVs hitting landfills across the nation and the world. Tragically, the United States has failed to ratify the key international accord on this matter, the 1992 Basel Convention on the Control of Transboundary Movements of Hazardous Wastes and their Disposal, or its subsequent updates. The Basel agreements seek to prevent the export of e-waste.

While the issue of contemporary e-waste is of vital concern, the ecological context of electronic media technology originates in the earliest industrial applications of chemical and mechanical science. For example, the type and volume of chemical waste emitted today into the air and waterways by large-scale papermaking and film-stock production can be traced to the chemical process for cellulose extraction from wood pulp invented in the 1800s. By 2000, Eastman Kodak had become the primary source of dioxin—a carcinogen known as a persistent organic pollutant—released into New York State’s environment, while the company’s hometown of Rochester was number one in the US for overall releases of carcinogenic chemicals. 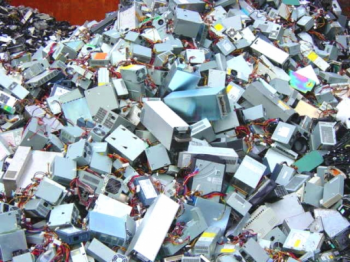 From an environmental perspective, the most significant point of convergence of telecommunication and microelectronic technologies is electricity. Just as the print and paper industries set a pattern of ecological relationships with waterway and steam power, 20th-century media technologies are wedded to electric power and its underlying physical property of electromagnetism. At the same time, chemical processing continues to function as the shared technical basis of electronic components, enabling the fusion of technologies while creating a common sinkhole in the earth’s ecosystem for chemical elements and compounds.

The ecological context of electronic media technology includes environmental burdens of energy generation and consumption throughout a medium’s life cycle, from production to consumption and disposal, its chemical basis, the inputs from the Earth (via mining, drilling, logging, etc.), and outputs into air, land, and water. Input effects involve the earth’s ability to provide resources whose quantities are either renewable or not (soils, forests, water, minerals, and so on). Output effects involve the ability of the earth’s ecosystem to absorb wastes from media technology’s electrical and chemical products and processes. The effects of these inputs and outputs outlive the medium’s existence through deforestation, CO2 emissions, irreparable harm to habitats, land and water poisoned by PCBs, dioxin, and heavy metals and toxic chemicals, etc.

In May 2007, another example of corporate “greenwashing” took place when Rupert Murdoch convened, for the first time, a global meeting of all NewsCorp’s employees (televised from a stage in New York City). The single agenda item was the announcement of the company’s “energy initiative”