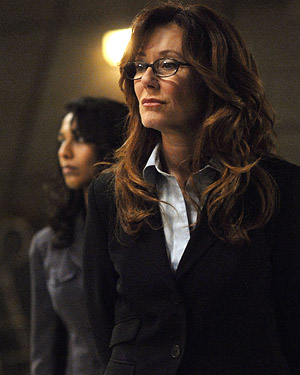 Sarah Palin’s selection as the Republican vice-presidential nominee generated huge amounts of popular discussion about her qualifications, her politics, her family life, and her possible effects on the race. However, my favorite of the questions sparked by her sudden political prominence was the simplest: who does she look like? Tina Fey certainly comes the closest in appearance, a fact Fey is using to her advantage in Saturday Night Live appearances. The Daily Show also pointed out her resemblance to actress Megan Mullally and “the mild mannered but troubled librarian from every Cinemax movie.”

But the comparison I find most interesting politically is the one to Laura Roslin, the president of the surviving Colonial Fleet on Battlestar Galactica, played by Mary McDonnell. Beyond the physical resemblance, there are narrative connections: Roslin is not an experienced political insider but a former education secretary tapped to be President in a political apocalypse, a woman of deep personal faith who believes scriptures should be a guide to political action and who has a decisive and aggressive personal style balanced by feminine appearance and demeanor. In addition, the metaphor can be taken further: John McCain bears more than a passing resemblance to Saul Tigh, the Executive Officer of Galactica, second in command of the Colonial Fleet, who is also a former prisoner of war. 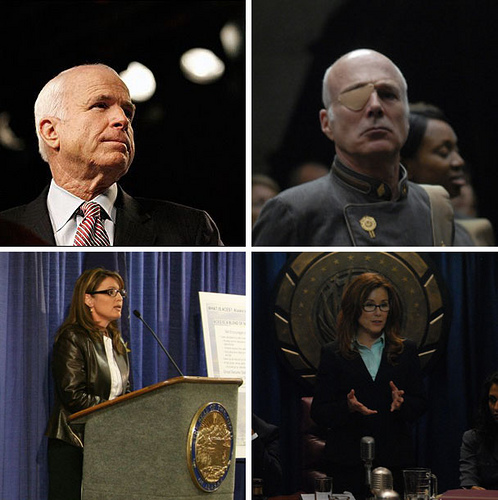 The comparison is so eerily exact that BSG fans had commented on it within hours of McCain’s selection of Palin, and io9, a sci-fi website, had declared the meme “tired” by the next day. A group of fans has even mounted a campaign website, TighRoslin.com, which includes position statements, endorsements, and campaign videos. 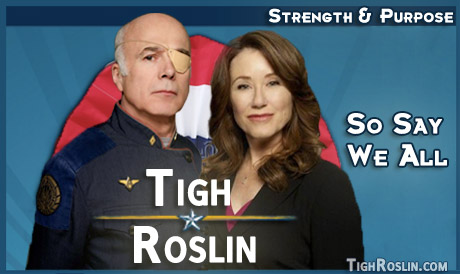 It would be easy to dismiss the Tigh/Roslin campaign as an example of media fans engaging in a little self-referential joke. But that would miss several interesting political happenings within the joke itself. The first is that Battlestar Galactica is sufficiently complex, and sufficiently political, that it is possible to interpellate political positions for its characters. Fans know where Roslin falls on abortion policy: the plot of an episode revolved around her decision whether or not to make abortion illegal in the fleet, and included arguments based on religion, civil liberties, and population structure. Her general style of governance, her position on separation of church and state, even how she feels about wildlife conservation: it is plausible to deduce political positions for Roslin on each of these contemporary political questions. Although Tigh’s role is less overtly political on the show, fans can deduce his political positions from his general style of leadership: brash, vaguely authoritarian, deeply concerned with the chain of command. Tigh/Roslin follows in the line of the Bartlett for President meme: it indicates that there is a fictional world with enough political resonance for viewers that it can be integrated with our political world.

Because Battlestar Galactica allows us to view the practice of politics up close, it allows viewers to consider an actual political candidate by inserting her into the interplay of characters, and imagining if the actual political world were like that. Roslin has a tendency to put the best interests of the Fleet, as she pictures them, above democratic values; she attempts to steal an election, with Tigh’s assistance, and often conceals her actions behind executive privilege. Within the series, we root for her, because we distrust the motives of her political opponents; we justify her willingness to authorize torture, and her summary executions of enemy combatants (usually through “airlocking,” throwing them out an airlock) because of the dire situation of the Colonial Fleet and the non-human nature of the enemy. But what happens if we project a Roslin-like person, Palin, into our actual presidency? Do we, Americans in the post 9/11 period, want to be governed by Madame Airlock (as she is affectionately called by fans)? The answer might be yes; a radio endorsement posted on the site is credited to a fiercely right-wing political satire blog, the Shire News Network. Or it might be no; one fan noted on the Battlestar Blog, where the idea for Tigh/Roslin was first proposed, that ze was worried the idea might actually encourage people to vote for McCain/Palin. Either way, we can use the fictional universe of Battlestar Galactica to think through the political consequences of a McCain/Palin presidency.

But Tigh/Roslin provides more than just a framework for thinking through nonfictional politics. Like the Bartlett for President meme (examples available here, here, and here), Tigh/Roslin contains an implicit critique of our political world. The critique contained in Barlett for President is a partisan one: Josiah Barlett as the anti-Bush, a Nobel Prize winner, a brilliant professorial type, deeply concerned with social welfare and only willing to use force abroad to protect human lives. Tigh/Roslin’s critique, on the other hand, is a critique of our political language and practice. The site contains detailed parodies of a number of recent political brouhahas: decrying Obama for calling Roslin’s policies “lipstick on a Cylon,” for instance, or fleet citizens shocked Tigh doesn’t know how many houses he has, because they were unaware people still owned homes. A campaign video focusing on Roslin describes her as “someone who will get the job done, whatever it takes. Someone with a no-nonsense attitude, who could stand up to the pressure, and look good doing it,” while panning over a sexy shot of Roslin on Caprica, barefoot, dressed in a full skirt and blouse rather than her usual President-of-the-Fleet business suits, in a gesture that pokes fun at the Republican-pin-up quality of much of the attention focused on Palin.

Roslin even gives a detailed rebuttal of accusations that her history as a Miss Caprica City pageant contestant (voted Most Likely to Airlock a Cylon) mark her as unserious: “My opponent would rather rag on my swimsuit competition photos than talk tough about national security. Who do you want leading the fleet to a safer tomorrow – someone who only cares about petty criticisms or someone who wants to talk about genuine reform, preserving the family, and making sure that a future generation of leaders are educated properly?”

There, in Roslin’s words, we can read a desire for a more substantial political debate. “Lipstick on a Cylon,” complete with a graphic of a centurion, a large, metallic, imposing robot, with red lipstick added to its decidedly non-human mouth, mocks the controversy over Obama’s “lipstick on a pig” comment. 1 And Roslin’s speech focuses on the question exactly: why do we care so much about Palin’s history as a beauty queen? Is the drama about her family structure as important as her views on questions of executive authority, religious freedom, and whether we should seek a negotiated peace with the Cylons–I mean, whether and how to manage the threat of Islamist terrorism through diplomacy? The Tigh/Roslin campaign is not just of a sign of how pop culture can be used to provide a springboard for political reasoning; it is also a call for consideration of substantive politics, not because other forms of politics lack seriousness, but because there are more serious things to make fun of here than lipstick and beauty pageants.

Author Bio:
Emily Regan Wills is a PhD candidate in the Department of Politics at the New School for Social Research, studying discourse theory, the Middle East, feminism, and pop culture fandom, singularly and together. She once had a dream the fifth Cylon was Alex Krycek.