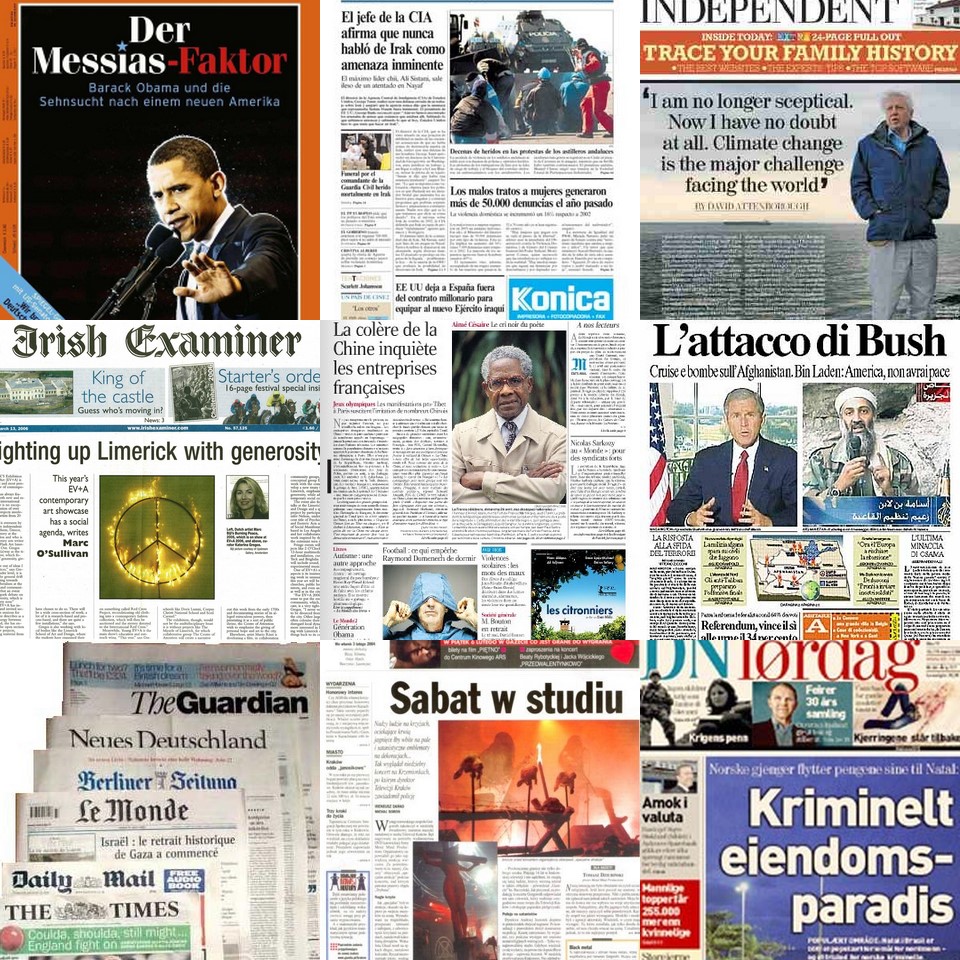 A Smattering of European Reactions to Sarah Palin

Eight years ago, when I first moved to Ireland, the 2000 Bush-Gore election was in full swing and the European newspapers were eagerly covering the events. Back then, not only the national dailies covered the election, but even the tabloids, which typically covered sports, gossip, and local news, had dedicated several pages to dissect the candidates. I found that the interest even spilled over into social situations, as friends, acquaintances, and strangers were eager to talk about the candidates. Eight years later, this remains the case on an even broader scale with the growth of the international blogosphere. An enduring fascination with presidential elections remains: European newspapers deluge their readers with stories of Barack Obama, John McCain, covered as feverishly as the U.S. press.

Recently, another name can be added to that list — Sarah Palin. The European press has been churning out reports on Bristol’s pregnancy, feminism, Troopergate, not to mention Palin’s haircut. Many of these reports are descriptive accounts, but in the process of investigating Palin, the European journalists have developed a unique analytical perception of the Republican vice-presidential candidate. What many European pundits have concluded is that the issues most central to their audiences center around foreign policy and the transatlantic relationship. Interestingly, the scandals that surround Sarah Palin and even her domestic agenda come in a distant second among the fervent European political junkies. With foreign affairs as the axis of the analytical evaluations, Sarah Palin has generated less admiration and more concern. Specifically, criticism has been levied on her experience, her education and her etiquette in foreign policy.

Palin’s inexperience has stirred the European press most. The U.K. left-leaning Guardian writes, “Her grasp on foreign policy is limited to a series of hawkish and naïve soundbites…America has had eight years of a government that has held similar views. The result has been to put an ideological and emotional distance between it and Europe.”1 What this editorial conjures is the fear that relations between the U.S. and Europe will remain on the same footing they have during the Bush presidency. Although Republicans can argue that friendlier faces now appear more prominently among Europe’s leadership (Nicolas Sarkozy, Angela Merkel, Silvio Berlusconi, and Lech Kaczyński) and that relations have improved with this transition, there has yet to be any grand rapprochement healing the scars incurred from the war in Iraq. Afghanistan also remains a potent reminder of this schism and threatens the unity of NATO. Although Palin’s inexperience has been applauded domestically as a fresh outlook on stale Washington politics, European journalists have been less likely to applaud this insight, as George W. Bush offered the very same message in 2000. The Guardian is not the only one to make such a connection. France’s centrist Le Monde has mocked the notion that Palin’s living near Russia somehow generates international experience, and Der Spiegel cites several German newspapers that have expressed anxiety over the “narrow scope of Palin’s experience.” In diplomacy, being a neophyte is not as charming. And for Europeans, Sarah Palin’s inexperience is a reminder to the international community that since 9/11, the U.S. has been entrenched in serving a domestic desire for candidates that shake up the traditional politicians, rather than valuing their experience.2

This also speaks to Sarah Palin’s knowledge of foreign affairs, perhaps a consequence of her inexperience, but also related to her education. Again, the reminder of George W. Bush resonates among the European press. Vittorio Zucconi, of Italy’s La Repubblica has concentrated on this connection. Zucconi draws similarities from Bush’s mediocre grades in college to Palin’s multiple college transfers and ultimately argues that such discrepancies weaken their foreign policy pedigrees. Zucconi was most critical of Palin’s first interview with ABC’s Charlie Gibson — in what has proven to be the most notorious query of the interview Gibson asked, “Do you agree with the Bush Doctrine?” A stumped Palin forced Gibson into re-asking the question in so many words, and then prompted her with a definition. Zucconi described his impression of Palin as a student attempting to dupe a professor, and though his impression of her as comparable to George W. Bush is among an extreme interpretation, it does indicate the concern that Palin represents no brighter prospects for the transatlantic relationship. Other European journalists picked up on this as well: El País called Palin “a real rookie in the international arena, an apprentice who had taken lessons on an important matter…without fully understanding.”3 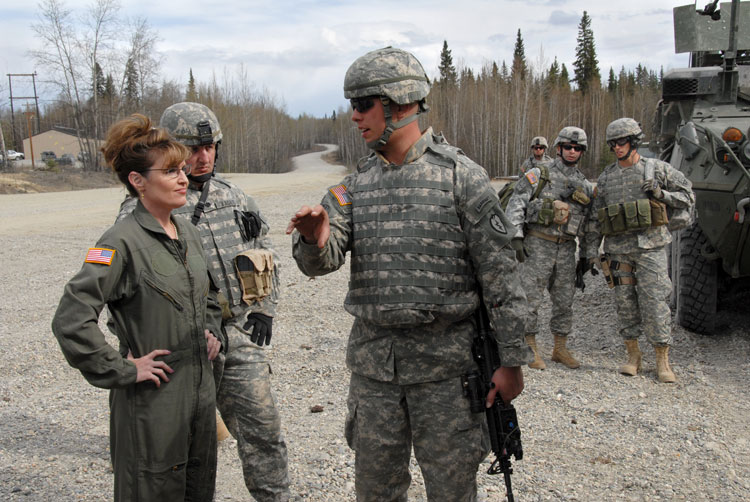 Sarah Palin with Members of the Alaskan National Guard

But just as quickly as criticism spread, many in the press corps on both sides of the Atlantic came to her defense. From the U.S. Charles Krauthammer, a neo-conservative columnist for the Washington Post and architect of the term “Bush Doctrine,” insisted that Gibson’s question was misleading as there is no single meaning of the Bush Doctrine. Rupert Murdoch’s London Times agreed that the question was loaded with multiple meaning, and Oliver Burkeman a reporter with Britain’s Guardian admitted that Krauthammer was technically correct; the Bush Doctrine “goes by several other names…the Cheney doctrine, the One Per Cent doctrine.” But Burkeman noticed something more significant in the exchange; “she doesn’t seem to know what a “doctrine” is, in its foreign policy sense, at all.”4 Wesley Johnson of the Irish Evening Herald also offered a succinct assertion that “this might not be something that your average hockey mom would know, but it probably is something that a commander-in-chief-in-waiting might have considered.”5 The perception of Palin’s education in foreign policy principles and tenets is a critical component of her credibility in Europe, and one that has yet to convince many journalists.

A final criticism from journalists has been Palin’s etiquette that springs from her religious convictions and Alaskan residency. A candidate’s certitude may convince domestic voters of their resolve, but from a foreign perspective, Palin’s blend of populism and unrelenting faith smacks of superciliousness. Rod Liddle from the British weekly magazine The Spectator has called Palin “a sort of Alaskan version of Pauline Hanson,” Australia’s fast-rising but quickly discredited far-right populist. Even the conservative London Times has raised concern that Palin’s Pentecostal faith which offers practitioners “certainty in an uncertain world” can seem arrogant to Europeans. Der Spiegel has noted that her faith has permeated policy in Alaska when the governor called an oil pipeline “a task that is from God.”6

Faith and populism do raise policy concerns for the transatlantic relationship. Her etiquette of faith and certitude begets a premonition of nativism. Immigration laws in the United States have already become much stricter since 9/11, including finger-printing and closer scrutiny of foreigner’s backgrounds. Any sense that the U.S. is moving farther to the right on immigration makes transatlantic social programs, educational exchanges, and tourism less feasible. The exclusionary tone of Palin’s uniquely Alaskan populism sparks a fear that she is an isolationist—not in the sense of trade and global economics, but certainly in the sense of cultural exchange. Maybe the fieriest indignation of Palin comes from the toothy Janet Street-Porter, the cockney editor-at-large of Britain’s Independent. 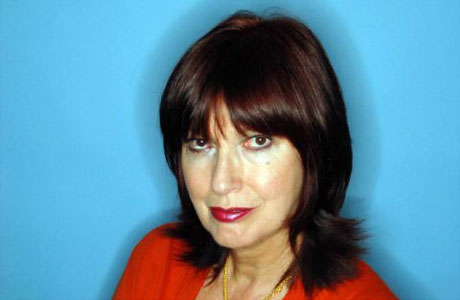 Never one to hold back on any occasion, Street-Porter writes that Palin “makes my flesh creep—That one note voice. That limited script. That constant referral to her twin motifs—God and Our Boys…Sarah Palin embodies all that is most insular about the American psyche. If you thought George Bush didn’t do foreign travel, welcome to the frighteningly xenophobic world of Mrs. Palin.” Janet Street-Porter argues that since 9/11, the U.S. has “spent less time trying to understand how people outside their own culture live and think.”7

Of course these three criticisms of Sarah Palin are among plenty of laudatory compliments for her ticket’s position on free trade and fiscal conservatism, and many pundits recognize that Palin’s inexperience, education, and etiquette may prove to be inconsequential as the vice-president. John McCain is not an uninformed novice nativist, and it is he who is running for president. But because of McCain’s age and Sarah Palin’s eruption as the campaign’s superstar, Europe is making its concerns known. Its greatest anxiety is four more years of the Bush presidency that always seemed to the European audience inexperienced, uncouth, and uninterested in its perspective. If John McCain and Sarah Palin win in November, European journalists will look for these traits to be rectified.

Author Bio:
M. Patrick Cullinane is a PhD candidate and Lecturer at University College Cork, in Ireland. His dissertation focuses on multiple facets of American anti-imperialism during the late nineteenth and early twentieth centuries.