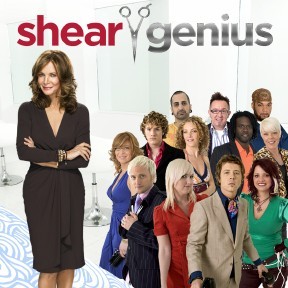 Feminists of color have long criticized the beauty hierarchy for how it objectifies women and for how it ranks white women as supreme to all others, the standard by which all women are judged. There is considerable writing, media and artwork in and outside of academia that grapples with black femininity as the abject of white femininity, and a great deal of this work talks about hair. Consider Ayoka Chenzira’s short film “Hair Piece” (1984), or the subtitle of essayist Lisa Jones’ book Bulletproof Diva: Tales of Race, Sex and Hair (1993). It is important to note that the ‘abjection’ of black femininity isn’t simply its marginalization or ranking on the lowest rung of the beauty hierarchy. Abjection is about situating an object, person or persons as the terrifying, repulsive ‘Other’ that helps to constitute us as subjects (we are NOT that awful thing). Radio host Don Imus was pilloried and fired for describing Rutgers University’s basketball team as “nappy headed hoes,” but the abjection of black femininity is rampant, and marks one of the many limits of multiculturalism. There’s a lot we’ll embrace, tolerate and celebrate today, but the unattractiveness of black femininity is common sense.

Discourses about black feminine attractiveness tend to focus on modeling and high fashion, such as recent controversies over the lack of black models in the American fashion scene and accusations that L’Oreal whitened Beyonce Knowles’ image in a print ad. Television is not as common a subject for such discussions. Exceptions include the common belief that nonwhite contestants are ciphers in white-oriented romance reality shows such as The Bachelor. However, there are few cases that make it clear. One is the Fox Reality Channel program Battle of the Bods, in which three men behind a two-way mirror rank women from 1 (most attractive) to 5 (least attractive). The hegemonic status of multiculturalism requires that a racially diverse group of women and men be represented. However, the show’s results suggest that for black women, at least, multiculturalism is a failure: they are routinely ranked fourth and fifth, no matter the racial makeup of the men judging the women. Even in an episode in which black women made up three of the five contestants, a blonde was continually rated first.1 To be sure, the spectacle of women on display for male judgment is problematic, but this show’s reiteration of white supremacy makes it even more disturbing.

The higher the number, the lower the women were ranked on Battle of the Bods

Most of this essay will focus on Bravo’s competitive hairstyling program Shear Genius. As we are accustomed to expect in reality television, the cast of contestants is diverse in terms of race, age, region and sexual orientation. The series is notable in that both seasons’ winners have been nonwhite: season 1 winner was black Brit Anthony Morrison, and season 2 winner was Mexican-American Dee Adames. But this diversity has its limit: the vast majority of Shear Genius‘ hair models (women who allow the stylists to work on their hair) have been white. In addition to these white women, there are also women who appear to be lighter-skinned, silky-haired Latinas, and the occasional Asian. Black models appeared twice in the first season (more on that later), but during the second season, there didn’t seem to be a single black model. Meanwhile, the contestants styled wigs for bald women (all white), and groomed dog hair. 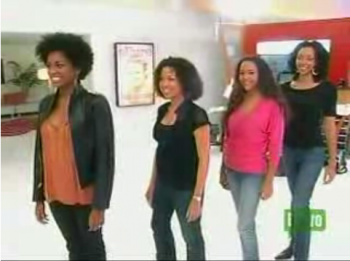 It is important to briefly explain the role that models play in the program. Unlike the lineup of professional models in Bravo’s Project Runway, these are mostly amateur models who are brought in for one challenge only. Each episode has a “Short Cut” challenge (a brief contest that, like the “Quickfire” on Bravo’s Top Chef, gives some privilege to the winner) and an elimination challenge.Therefore, most episodes have two sets of models. On rare occasions, the challenge is hair-specific and requires models with a certain kind of hair. For example, a season two Short Cut involved styling extremely long hair. Most challenges can ostensibly accommodate a variety of hair types and lengths, but black models are virtually never part of these challenges.

The show’s process for hiring (and excluding) hair models is unclear. But at least two related forces lead to the marginalization of black models: black women’s suspicion of white stylists, and white stylists’ fear of black women’s hair. Most black women have strong reservations about whites styling their hair, because they assume that white stylists won’t know what they’re doing; I imagine that this could make it difficult to find black models.2 And indeed, cosmetology programs primarily teach how to treat “hair,” that is, silky Caucasian hair. Intensive instruction on styling “black hair,” that is, hair that is tightly curled (‘kinky,’ ‘nappy’), is optional.3 Therefore, most of the Shear Genius stylists are most comfortable working with hair that is naturally straight. But hair deemed “too straight” is a problem, as well. In a second season episode, a Shear Genius contestant working on an Asian model complains that Asian hair is “hard to work with” because it’s so straight. At judging, the stylist, Nicole, is commended for styling such “difficult” hair. In a later episode, Nicole is assigned to cut and style Dee’s mother, whose hair is particularly thick, straight and dark. Nicole groans: “Dee warned me about Mexican hair!”

Not all white models are desirable. White models with thin, fine hair are often chosen last. And stylists complain about white models’ hair that they deem so thick, curly or dark that styling or making it lighter (which is normally how the hair is dyed) becomes “difficult.” Here, it is important to note that having hair that is deemed “too” dark and “too” curly are often signifiers of “almost white” status, such as Jewishness and Italianness. That said, Shear Genius still routinely cast white models with “difficult” hair. Black hair, however, remained marginalized, and as a result, so did black women. The result of this abjection is that “hair” is routinely defined as “not black.” 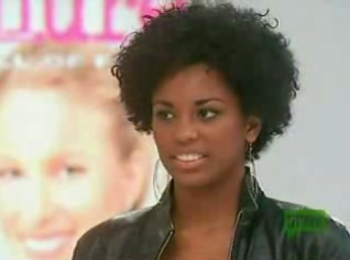 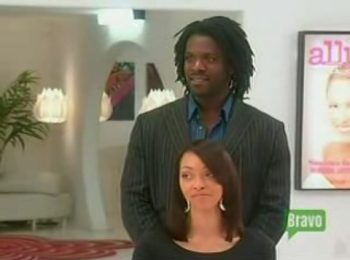 Anthony and “Straighten It” client

As stated earlier, there were a few black models in the first season. One was part of a challenge for “hair art,” and chosen last. Her stylist, the black “Dr. Boogie,” claimed that the other contestants were scared of her texture. The rest of them appeared in a Short Cut challenge to of course, straighten their hair. In fact, the challenge carried a title that also read as a directive: “Straighten It.” By this stage in the competition, there were four stylists left: a Cuban-American woman, two black men and a white man.4 The woman and the black men were comfortable with the challenge, but the white contestant, Ben, expressed confusion and absolute fright, saying “The words ‘African-American hair,’ for me it kinda makes you shake a little bit, because you never know what you’re gonna get.” We are to empathize with Ben’s terror, meanwhile we see nonwhite contestants style white women every week. A poster at the Television Without Pity online forum for Shear Genius pointed out how this resonated in real life, and added, “I just can’t see calling them master stylists if they’re scared of black hair.”5

Like Dee’s apparent “warning” about Mexican hair, the frightfulness of black hair is legitimated by Dr. Boogie, who had the last choice and ended up with the model with the most tightly curled hair. He declared that unlike the other contestants, he couldn’t simply blow dry or flat iron his model’s hair: “I had NO choice but to give her a [chemical] relaxer, ’cause mama had some thick steel wool hair.” Of course she didn’t have hair like a Brillo pad, but Dr. Boogie’s homespun wisdom underscored the series’ clear message: ‘Nappy headed hoes need not apply.’

1. Shear Genius Season 2 Promotional Photo
2. The higher the number, the lower the women were ranked on Battle of the Bods
3. Shear Genius Models
4. “Steel Wool” Woman
5. Anthony and “Straighten It” client