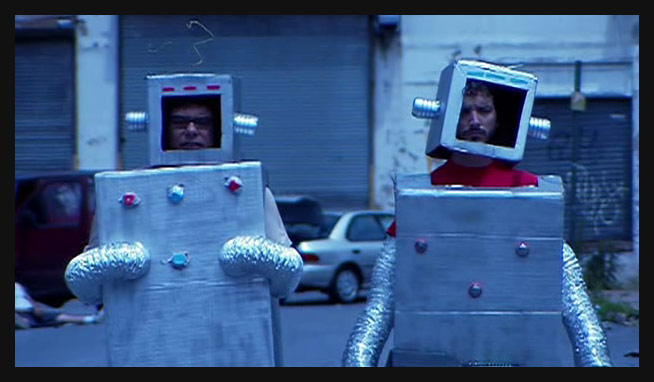 Flight of the Conchords members Bret and Jemaine do the “Robo Boogie” in one of the show’s supradiegetic inserts.

Admittedly, HBO’s Flight of the Conchords and NBC’s Medium have little in common. A thirty-minute sit-com-musical hybrid, Flight of the Conchords (FOC) follows two New Zealand digi-folk musicians, Bret McKenzie and Jemaine Clement, as they seek rock and roll fame (and girlfriends) in New York City. Medium, on the other hand, concerns itself with Allison DuBois, a psychic woman who uses her “gifts” to solve crimes, first as a consultant for the Phoenix, Arizona D.A.’s office and then as an investigator for a firm called AmeriTips. The hour-long show, itself a hybrid combining the police procedural, fantasy, and domestic drama, also closely follows Allison’s home life and her role as a wife and mother.

Not only do both shows air on very different channels and engage different generic conventions and television formats, the central subjects and themes of the programs have few, if any, ties between them. So why compare apples with kiwis?

Both Allison Dubois’ psychic visions and the musical sequences in FOC operate as what I would tentatively label supradiegetic inserts, to borrow a term from Rick Altman’s discussion of the Hollywood musical.1 While Altman uses “supradiegetic” primarily to discuss sound in terms of its relationship to diegesis, I would like to employ the term more broadly, to refer not only to sound, but also to moving images that accompany it. Thus, when I use “supradiegetic” in this column, I’m referring to moments in the text, registered both visibly and audibly, which are neither wholly diegetic nor extradiegetic, but which confuse the distinction between the two. Furthermore, I am calling these moments “inserts” simply to note the clear delineation between these moments in the text and the central diegesis.

The object of this column is to outline the formal characteristics of these inserts as well as influences on their structure, and to explore how they function for both the shows’ producers and their audiences. To this end, I will begin by looking at a salient example of a supradiegetic insert in each show.

“Girlfriends,” quite possibly my favorite episode of FOC, features two inserts, the first of which begins 1:44 minutes into the episode and ends approximately 2 minutes 25 seconds later (please see above clip). Directly before the insert, Jemaine and Bret enter a pastry shop and Jemain orders a croissant. Music begins followed by what might best be described as a graphic-match jump cut wherein an initial medium shot of Bret and Jemain in the café is followed by a shot of the pair in identical positions but wearing different clothes in the now vibrantly decorated café. In addition, the surface of the image has been altered to indicate artificially aged film stock. Jemain begins singing “Foux de Fa Fa”—a nonsensical French song that would have made Ionesco proud—as people in berets and voluminous 1960s coiffures walk behind him. The camera cuts back to the two waitresses, still in drab 2007 garb, right before a similar graphic-match jump cut. The quick return to the aesthetics of the non-musical diegesis briefly indicates and emphasizes the boundaries between these two moments in the text.

It is very important to note that the supradiegetic insert is separated from the central diegesis both by music and, more interestingly, by a switch in visual style apparent in the mise-en-scene (bright colors and patterns, retro clothing and hairstyles), camera work and editing (crane shots, dissolves, and jump cuts ), and the artificial ageing of the image surface.

Not only do all of these elements indicate a style that is different from that of the main diegesis, they indicate the very specific and identifiable style of 1960s French musicals, such as those by Jacques Demy—at one point, the characters in the insert even twirl large umbrellas in an overt allusion to Demy’s The Umbrellas of Cherbourg. Complicating this further, the musical number also invokes Scopitone mini-films— extremely short music video-like films made for Scopitone jukeboxes and popular in the 1960s—through angled camera shots, styles of cuts, especially the series of cuts from the picnic to the tree trunks, and a certain style of dancing. 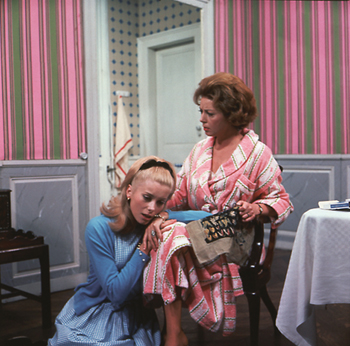 Screen cap of The Umbrellas of Cherbourg illustrates the colorful mise-en-scene allusion in FOC’s “Girlfriends” episode.

The insert concludes as the song ends and a swish pan returns the focus of the show to the central diegesis and its initial visual style. The four central characters are again situated in the non-musical New York City present, the café, however, has been replaced by a bar and the four are out on a double date. Here, the supradiegetic insert functions as a bridge that connects the first time Bret and Jemain meet the waitresses to their first date with them, implying that some sort of coupling occurred in the gap between the two non-musical moments. While this is certainly nothing new for musicals, it is an important element of the supradiegetic insert—that it is invested in, and vital to the central diegesis of the show while formally operating somewhat outside of that diegesis.

Perhaps this is clearer in the supradiegetic insert’s use and manipulation of specific and identifiable styles, which is the origin of much of the program’s humor, as well as the source of one of its defining qualities—its hipness. By quoting extensively from global music media’s aural and visual styles, two of the show’s creators, real-life Bret McKenzie and Jemaine Clement, are able to claim rock/indie/pop music literacy and transnational cool, which is then transferred to viewers who “get” the joke. Thus the insert works both on a diegetic level—it’s when the coupling occurs—and on another level—the joke of the style, which has little to do with the actual plot.

Hopefully, a second example will help further elucidate this somewhat slippery relationship between the supradiegetic inserts and the diegesis. While the diegetic motives for the inserts are clearer in Medium—she’s psychic, she has visions—their formal structure is somewhat more complicated than in FOC. Each episode of Medium generally begins with one of Allison’s psychic dreams—what I am considering the show’s inserts—and then, because Medium is in part a police procedural, the dreams are treated like evidence that must be routinely reexamined in order to solve (or prevent) the crime perpetrated at the beginning of each episode. Most often, this occurs in abbreviated waking flashback versions of dreams repeated in the central diegesis. 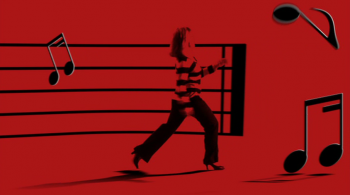 Above: a screen capture of the supradiegetic insert in “The Song Remains the Same.”

For example, in “The Song Remains the Same,” the episode—and the supradiegetic insert—begins as a close up on a digital audio display bouncing to the tune “I will Survive.” 2 As the shot moves in tighter, Allison, in high-contrast black and red, appears between the lights of the display, sings along to the song, and eventually fills the screen, dancing around black musical notes in an undefined expanse of bright red—all in a visual style very different from the aesthetics of the rest of the program. The show then cuts to Allison, as she is pictured in the central diegesis, waking up from her psychic dream. The music, however, continues to play extremely loudly—we learn it is “stuck” in her head—drowning out diegetic sound until Allison finds a broken ipod, which begins her quest for a missing woman.

While elements of the supradiegetic insert linger—in this case, the song lasts after the insert concludes (and she wakes up); in other cases, Allison often re-experiences visual snippets of earlier visions/inserts until she solves the case—these flashes of visual or aural information are best described as flashbacks or, in some cases, elements of montage. One thing, then, that seems to set supradiegetic inserts apart from these other devices is that the inserts comprise complete narratives, with a beginning, middle, and end. Furthermore, because of this structure, it is possible for the inserts to function independently of the diegesis, without the reverse being true.

Fan-made montage of Allison’s visions depicts several of the different visual styles employed in the show.

I would like to conclude my discussion of these supradiegetic inserts by briefly mentioning a few ways I think they function for producers and viewers. First, among other things, the use of multiple styles and the innovative segmentation that results from the use of these inserts operates as a major point of interest and entertainment for each of these shows’ viewers. Second, the aesthetics and formal qualities of the inserts seem to reflect the practice of viewing varied AV clips on online video sites. At the same time, the structure of the shows and the neatly demarcated and self-contained supradiegetic inserts offer prepackaged clips perfect for dissemination on video-sharing websites like YouTube (which has obvious benefits for the shows’ producers).

I wonder if this final point might offer an avenue of further exploration. It seems to me that the way in which the two media—TV and the internet—influence and react to one another borders on a bizarre chicken-and-egg origin story in which moving picture conventions are evolving and expanding in fascinating, if sometimes difficult-to-locate, ways.

1. Flight of the Conchords members Bret and Jemaine do the “Robot Boogie” in one of the show’s supradiegetic inserts.
2. Screen cap of The Umbrellas of Cherbourg illustrates the colorful mise-en-scene allusion in FOC’s “Girlfriends” episode.
3. Screen capture of “The Song Remains the Same” taken by author.