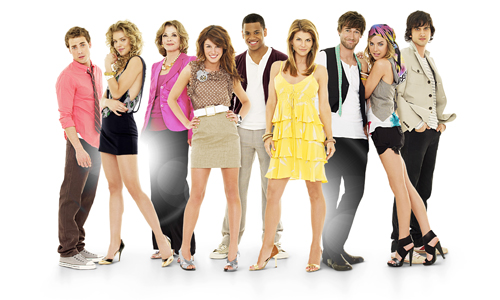 When Beverly Hills, 90210 premiered, I was still in high school, and I still remember my initial reaction to the show as the film rolled on the actors in West Beverly High:

Who in the world are these really old people?

Indeed, being from small-town Midwestern America, I had not seen teens the bleach-blonde likes of Tori Spelling, who was actually a younger than I was despite looking far older, but all of the “teens” on this show just looked at least 25 to me – way too old to be playing high schoolers. (And in fact, it turned out some were. Luke Perry, who played Dylan McKay, and Ian Ziering, who played Steve Sanders, were in their mid-20s when the show first debuted, and Gabrielle Carteris, who played Andrea Zuckerman, was actually 29.)

So it felt like déjà vu when I saw a promo announcing that 90210 – a latter-day spin-off of Beverly Hills, 90201 would debut on September 2. The girls in the advertisement — certainly the one sitting in a Jacuzzi between a pair of male legs — had to be fairly close to 30. (I’d like to hope that hot tub parties aren’t starting in the middle teens now, though I’m sure I’m still a naïve small-town Midwesterner at heart.) 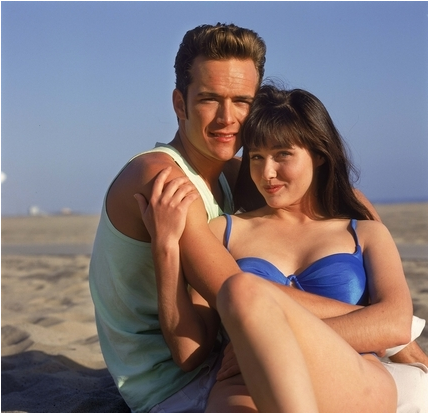 If you have never heard of 90210 in either form, I’ll quickly get you up to speed: The Aaron Spelling-produced show (yes, he was Tori’s dad) premiered on Fox in the fall of 1990 as one of the first-ever teen soaps, and initially centered on Brandon and Brenda Walsh, twins whose parents uprooted them from Minneapolis, Minnesota, to flashy Beverly Hills, California, where they befriended surfers and children of Hollywood execs and former stars, and wormed their way into the intricate social scene while dealing with issues like drug abuse, accidental gun violence, racism, teen pregnancy and date rape. The wildly popular show, which was geared toward the teen and 20s demographic, lasted 10 seasons.

Beverly Hills, 90210 was one of the first of a genre of soap operas featuring beautiful teens living in a fantasy environment, and arguably, a cultural touchstone.1

It also seemed to spawn a genre of shows casting beautiful young people, who are supposed to be teens, but actually look 10 years older than your average teen. Think about James Van Der Beek on Dawson’s Creek, Scott Wolf on Party of Five, Kristin Kreuk on Smallville, Charisma Carpenter on Buffy the Vampire Slayer, and every single “teen” character on One Tree Hill. Even though they might have been adolescents at the time they started playing their signature roles, they did not look it.

The question then becomes, why do producers repeat this casting tactic, when it could serve to make the shows even less realistic in the eyes of the viewers they hope to attract?

This is a complicated question, but I believe the answers are less complicated. First, in the new 90210 debuting next month, consumerism is a clear motivation. Notice how Dior, Dolce and Gabbana, and Tiffany appear almost subliminally in the trailer:

If you are wearing Dior and Dolce, you are probably not an average 16-year-old girl, even a girl from the 90210 zipcode. These are sophisticated clothes, designed to look good on very thin women in their late 20s and older … apparently like the “girls” on the new 90210. These particular actresses can succeed in selling a lifestyle and a luxury brand name in their 20-something bodies so much better than they could have in their 16-year-old bodies. (As a counterpoint, imagine Lane from the early Gilmore Girls shows in similar fashion.)

Second — and others (Katherine Sweeney in Maiden USA, M. Gigi Durham in The Lolita Effect, and Emily White in Fast Girls, to name a few) have made this point previously in more scholarly terms: It would be downright creepy to see average-looking 14 to 18-year-olds placed in the sexualized world that is a teen soap opera. Imagine girls – such as your 14-year-old niece, or if you need to envision a more famous high school freshman, Dakota Fanning perhaps — cavorting in a Jacuzzi, seducing older men, wearing stilettos and micro-minis. In order for audiences to derive (guilty) pleasure from watching these situations in 90210, producers must represent adolescent girls as women in their mid-20s. While our culture has seen (and in some cases, embraced) the sexualization of increasingly younger starlets over the past 10 years, we still might not be at that extreme point.

However, I would argue that this is just a fairly easy critique of media representation of the adolescent girls. There is a more troubling underlying current here to examine, and that is the realization of how the feminine body, and specifically the adolescent female body, exists within cultural discourse, and how it has changed over a relatively short span of time. We can see this clearly in the two versions of 90210. It is absolutely striking to note how different the young women cast in the roles in the 2008 version of 90210 look than their predecessors in 1990. Granted, fashions and trends change. But put the high-waisted, baggy acid washed jeans aside and focus on bodies and faces. Notice how the bodies of the 1990s females in the cast are proportioned. They have hips, wider thighs, vaguely pronounced muscles and heads that appear to belong on top of their bodies. By the standards of 1990, these actresses were thin and pretty. 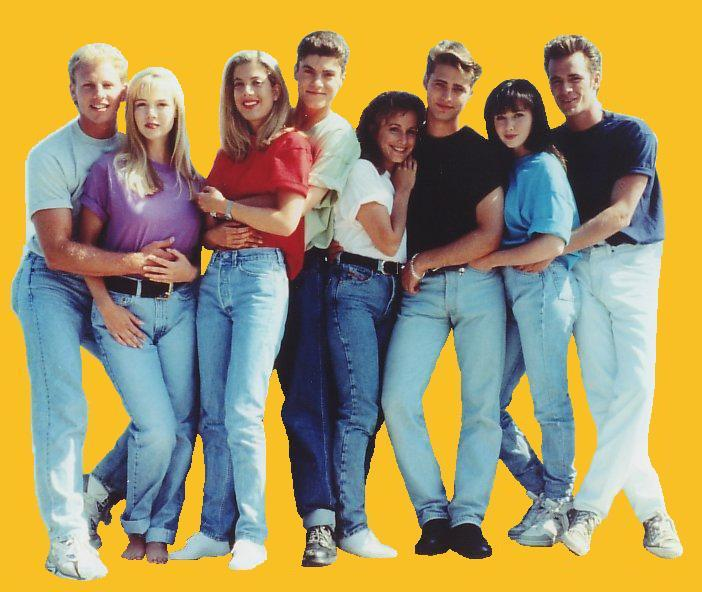 Without the aid of Photoshop (which was released just after the first 90210 episode aired), these young women – old as they looked to audiences at the time – probably would have looked ridiculous decked out in the clothing we see on the stars of the new 90210. They would not have been good for the consumerist, fashion-fetish aspect of the program at all. Furthermore, despite the “racy” episode in which Brenda loses her virginity to Dylan, members of the original cast were hardly sexualized at all; this episode pales in comparison to even the trailer for the new 90210, where the actresses appear to be lounging in a dark bedroom with another (male) character making out with an unseen partner behind them.

And it is not only the adolescent girls from Beverly High who must undergo a cultural aging process to become culturally intelligible to the 2008 teen soap audience. The mothers, teachers and other adults in their lives must as well – though theirs is reverse-aging. Cindy Walsh, the mother from the original series who was played by Carol Potter, appeared to be in her middle to late 40s, and dressed modestly enough for audiences not to even wonder whether she had a yoga-body underneath. Lori Loughlin, who plays Debbie Wilson, the mother of the Kansas-transplanted teens in the new series, is actually 44 in real life, but she looks nearly as beautiful and thin as the high school girls, making most of the women on the show appear to be close to age 30 in the promotional materials. 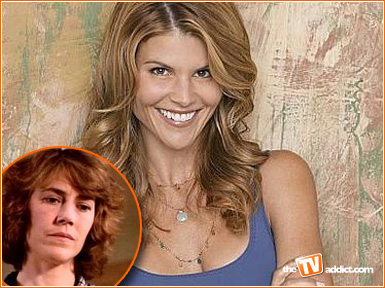 In borrowing from the theory of Susan Bordo, the women from both shows demonstrate how in a very short but increasingly mediated point in history, women’s and girls’ bodies are shaped and inscribed by the culture surrounding them.2 Through pilates, cosmetic surgery, low-carb diets, hair straightening, skin lightening, Botox, and so many other means, women have mirrored media representations of “perfect” women and shaped their bodies to fit the representation. While Photoshop almost certainly plays a role in the perfection process of promotional photos, however, it does not stop women and girls in reality from attempting to alter their bodies and faces to conform to this fantasy portrayal.

The old and new versions of 90210 exemplify this idea perfectly. And in the new version, all of the female bodies portrayed must be old/young/perfect enough for this cultural moment to enable a plot that allows audiences to feel enticed without feeling dirty, guilty or simply disgusted. 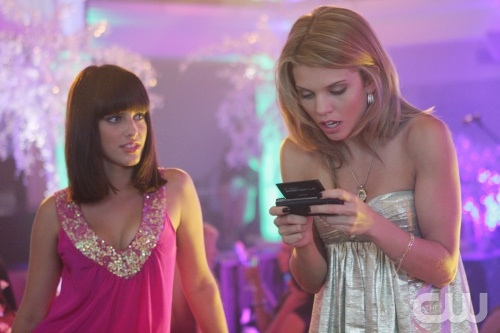 Of course, it is important that we not discount the notion of agency – the notion that audiences can make what they will of this new show. Many of us found the original to be campy and ridiculous, and we reveled in the ridiculousness. Certainly audiences have the power to do the same with the next, and in our brave new media-ted world, we might even enjoy the recaps of this new version on Television Without Pity more than watching the actual program. However, Bordo’s point cannot be lost in the argument for media pleasure or resistant readings of cultural texts like 90210. When dominant cultural discourses that relegate girls and women to the passive, stereotypical roles of consumer and sex object actually lead to both physical and cultural change, we should take notice.