“I Can Have It All”: Liz Lemon Negotiates Power, One Sandwich at a Time
A. Vesey and K. Lambert/FLOW Staff

In the “Sandwich Day” episode from the second season of 30 Rock, protagonist Liz Lemon hopes to reconcile with her ex-boyfriend Floyd at the airport, who is leaving New York City to head back to Cleveland. Stopped by security, Lemon must choose between him and her sandwich, which she can’t take with her to the gate. Refusing to compromise, she yells “I can have it all!” and promptly devours her delicious sub before running through security.

This scene is memorable for various reasons, not the least being that women rarely eat on network television. This scene references a running joke throughout the show between Lemon and her love of food. However, the feminist pleasure in this scene resides in Lemon’s refusal to trade in self-gratification for heterosexual romance. Generally speaking, television’s female protagonists personal ambitions and pleasures are cast to the wayside as the goal of “getting the guy” trumps all.

Meat and men aside, Lemon routinely struggles in balancing her personal, and often feminist, ambitions and NBC’s regressive politics, where she works as comedy writer for The Girlie Show. In this respect, the scene from “Sandwich Day” illustrates the tension between Lemon and her work environment. This tension makes us, as feminist media scholars, fans of the show. From the show’s debut in fall 2006 (incidentally, the same time that we entered into the MA program at UT), it’s consistently been a show we follow extensively, no matter how hectic our schedules are, and dissect at length.

As feminists, we’re constantly drawn to Lemon, whose job parallels 30 Rock creator and star Tina Fey’s experiences as the head writer at Saturday Night Live . For many viewers, including us, it is difficult to wrench the character from the actress. 30 Rock‘s blending of the fictional and the biographical might also be the show’s greatest contribution to scholars investigating the intersection of gender and political economy in media production, particularly as Fey constructs an avatar and, in the process, presents what can be read as a self-reflective feminist critique of working in the culture industry. 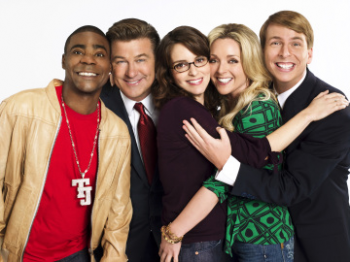 While 30 Rock‘s self-reflective style may not be new, the show offers up an explicit critique of mainstream media that is distinct. In a recent Bitch column, Erica Lies argues that 30 Rock is unique because Lemon “taps into women’s apprehensions directly.”1 Fey herself is open about her feminist identity. Given Fey’s political views, it is surprising how well she has made a name for herself in comedy, especially when, as Heather Hendershot argues, few shows on network television comediennes as the protagonists and are targeted toward women.2 As comediennes have to operate in a male-dominated industry and appeal to male audiences, Fey’s position as writer, producer, and star of 30 Rock and the overall success of the show demands further analysis.

As the show prepares for its third season, it is important to ask whether Lemon speaks to female viewers about gender politics in the workforce. For all of the program’s (and protagonist’s) wit, there’s a lot of power struggle, and sometimes Lemon, perhaps frightfully, easily cows to the pressures of patriarchy. 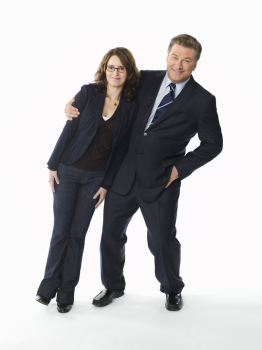 Such issues burbled in season one, often between Lemon and her boss, Jack Donaghy (played by Alec Baldwin), the Vice President of East Coast Television and Microwave Oven Programming. In season two, however, some episodes illustrate the difficulty women face when struggling against a patriarchal work environment. One controversial episode (indeed, a source of contention for us) was “Rosemary’s Baby,” an episode where Lemon meets her hero, legendary comedy writer Rosemary Howard, played by Carrie Fisher, who is herself a feminist icon who paved the way for women like Fey.

Howard, as played by Fisher, is a radical feminist television writer from the 1960s and 70s, who attacked patriarchy and the status quo with controversial television skits featuring far-left social commentary. At a signing for Howard’s latest book, Lemon asks Rosemary to be a guest writer for The Girlie Show. Lemon is drawn to Howard’s audacious nature, especially after being awarded the “G.E. Followship Award” (earlier in the episode) by Donaghy for complying with executive policy regarding programming and product integration. Howard is a reminder of the steadfast feminist politics Lemon once adhered to. Lemon yearns to be like Rosemary and demand for radical politics to be represented on television.

Yet, 30 Rock is a not above laughing at women, let alone feminists, and the idealism in this episode quickly deteriorates. Deciding to eschew the boys’ club of network television, Lemon quits after Donaghy fires Howard, prompting the two of them to brainstorm their own program. Once Lemon arrives at Howard’s place, their alliance falls apart. Lemon realizes that Howard lives in a dump where neighbors pack guns. Realizing what she gave up, Lemon regrets her decision, especially once Howard bitterly reflects on her own life, disclosing that she is single, unemployed, and barren. Howard offers up this list as though categorizing what she has given up in order to maintain her feminist politics and integrity while castigating Lemon’s inability to forsake her plush apartment and the middle-class status that comes with her corporate job. As Lemon runs out the door to escape her mentor’s fate, Howard calls out “You can’t abandon me, Liz. You are me.” The episode ends with Lemon groveling to Donaghy for her job back, asking him for financial advice, and working out a payment plan for Howard. 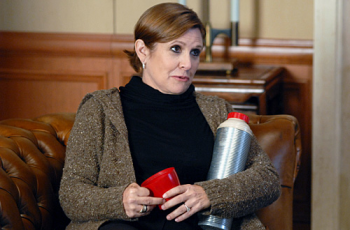 What seems most problematic about this arc is the implication of generational derision among feminists. The title of this episode no doubt refers to Ira Levin’s novel and Roman Polanski’s film of the same name, in which a woman unsuspectingly gives birth to the Devil’s child. In 30 Rock, the reference is two-fold, primarily commenting on the intergenerational conflict amongst feminists. Yet this reference also pertains to Howard, who by the end of the episode literally becomes the burden Liz Lemon bears—psychologically as a reminder of feminism’s (troubled) legacy, as well as financially.

Howard is a woman associated with the characteristically more radical second wave of feminism. Thus, she seems a scary harbinger of things to come for Lemon, who is labeled by her associates as part of the third wave, which is often characterized by post-structuralist practices of appropriating once-conventionally feminine practices like knitting and baking and, in terms of media production, often reliant upon postmodern practices of pastiche and parody which may, according to Helene Shuggart, Catherine Egley Waggoner, and Lynn O’Brien Hallstein, both defuse and be in accord “with the dominant paradigm that they appear to resist.”3

The ability to be a part of the dominant paradigm while commenting on it is a motif in this episode, as when Donaghy argues that people who “push the envelope” are the same “people who don’t have the guts or the brains to work inside the system—letter writers, radicals, Howard Dean.” That Donaghy, the least feminist or progressive character on the show, affirms and admires the same strategies aligned with third wave feminists calls these strategies into question.

A great deal of the 30 Rock‘s humor draws from the uneasy alliance created between Donaghy as mentor and Lemon as his pupil. In “Succession,” Donaghy, sure he will inherit NBC from his ailing superior, Don Geiss, elects Lemon to his old position, which she initially refuses, until she sees how much she would make and resigns from her current position.

Much has been said about the gender politics of the show and its (liberal) feminist underpinnings, but another key aspect of 30 Rock is its constant foregrounding of class and capitalism. Lemon may share a paternalistic relationship with Donaghy, where he is vaunted into a loftier economic position, it should be reminded that, compared to her employees, Lemon is certainly not without privilege. Her spacious apartment is often shown in the series, but we tend not to see where her employees live. If it weren’t for casual mentions from Frank, the comic book/porn enthusiast staff writer, about having to pay his mother for rent, or cutaways to Kenneth the Page having dinner with his grandmother in a cramped apartment, we might assume that the employees live at 30 Rock.

These class issues suggest capitalism to be a primary motivator for the workers on 30 Rock, who, as L.A. Weekly’s Robert Abele are invested in “getting mediocrity on the air.”4 Within the context of the show, these programs tend to produce little more than trite catchphrases and grotesque sight gags. This is, again, where the show is interesting (and troublesome) with regard to the stakes for professional feminists in media production. The writers and actors aren’t fighting for the integrity of quality programming; they’re trundling out mindless entertainment and getting paid for it.

Thus, the higher people climb in corporatized media production, the more likely they will be compromised by economic security, whether they’re men or women. Moreover, Lemon’s efforts to alter mainstream media from within may seem meager. Yet, her attempts should not be completely discredited. She is the creator and head writer of The Girlie Show, starring her best friend Jenna Maroney that had a largely female and queer fan base. Lemon’s character also critiques other NBC programs, like MILF Island, a Survivor-style reality show between hot moms and adolescent boys. Lemon protests that this and similar shows appeal to the lowest common denominator—a largely heterosexual male audience between the ages of 18 – 45, the very demographic Donaghy solicits. 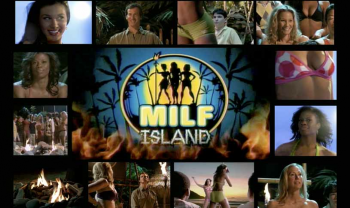 Fey also provides commentary. Lies points out that the 30 Rock writing staff, ordered by network executives to incorporate Maxim in a tie-in promotion with Verizon, took the opportunity to poke fun at and thus subvert how the publication objectifies women by featuring Maroney’s character in a fictitious pictorial. This is an interesting commentary to place alongside Fey’s increasingly established sex appeal, evident in such recent magazine covers for Bust, Entertainment Weekly, Marie Claire, and Vanity Fair, which featured Fey alongside attractive comediennes Sarah Silverman and fellow SNL talent Amy Poehler.5 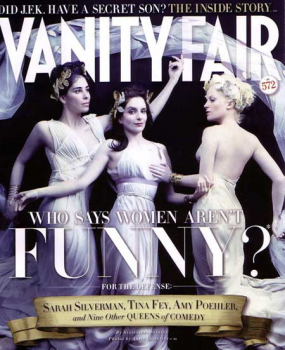 Silverman, Fey, and Poehler on the cover of Vanity Fair

Overall, while women are becoming more visible in comedy, we wonder at what cost. Comediennes still aren’t hosting late-night talk shows or opening blockbuster movies. After all, it is Jimmy Fallon, an SNL alum, who will replace Conan O’Brien, not one of his female contemporaries. We were also both very disappointed in last spring’s Baby Mama, which starred Fey and Poehler (though they didn’t write it), primarily because the premise, a professional woman who is unable to have a baby hires a surrogate, was tempered with a narrative pock-marked with regressive gender politics and a reliance on heteronormativity. Most importantly, it lacked all the witty, stinging social commentary on which Fey has made a name for herself. That said, we are both looking forward to season three of 30 Rock, a problematic but overall crucial show on television that delivers laughs and social critiques.

With the growing success of Tina Fey’s various endeavors as writer, producer, and star of 30 Rock we hope to “have it all” one day soon—witty engaging media, written, produced, and directed by women for women and with a feminist bent.