Gaming for the Gal on the Go: Advertising the Nintendo DS
Carly A. Kocurek/ FLOW Staff 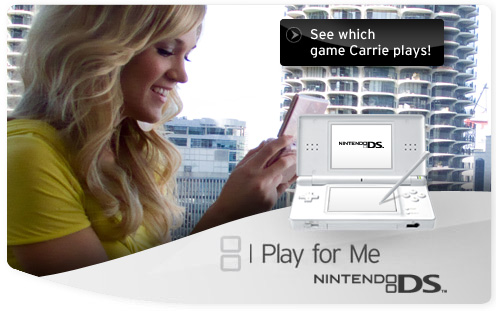 “I Play for Me” features Carrie Underwood with a “metallic rose” Nintendo DS.

In answer to the question “What is the Nintendo DS?,” the “I Play for Me” Web site offers this description:

“Nintendo DS is a sleeky, sexy, and fun way to enjoy gaming on the go. The DS includes a stylus to control games, a microphone (yes, you might find yourself yelling in front of your friends), a touch screen and many other unique features. It has a great library of games and is easy to pick-up and play no matter how much or how little downtime you have.”

The “I Play for Me” ad campaign posits the DS as a combo accessory and stress reliever – like a new purse and a nice cup of tea all rolled into one. The three ads that form the core of the campaign each feature a different female star playing the Nintendo DS during her obviously limited free time.

In the first, America Ferrera, presumably on the set of Ugly Betty leans back in a folding chair as she plays New Super Mario Bros. Ferrera’s pink DS Lite is emblazoned with her first name in sparkling rhinestones. As she remains engrossed in the game, she speaks in voiceover: “After 12 hours in front of the camera, sometimes, I play for me.” In the second, Carrie Underwood, reclining on her tour bus, pets a virtual dog in the game Nintendogs, played on her pink Nintendo DS. In the last 10 seconds of the commercial, Underwood is shown with her real life pet, Ace, who seems intrigued by her game play. And, in the third, Liv Tyler sprawls in pajamas, singing along with a piano song in Brain Age 2: More Training in Minutes a Day! played on her black Nintendo DS.

While these advertisements doubtless have appeal for younger girls, they target an audience of adult women. The campaign Web site describes the game Ferrera is playing as “America’s Pick” and concludes a description of the pleasures of play with “You’re only as old as you feel – and that’s where Mario and his friends can be of service.” The description of “Liv’s Pick” similarly makes clear that the game is appropriate for working women: “After you’ve spent all day working, there’s got to be a good way to unwind.” The game is framed not only as a way of relaxing, but also as a means of self improvement, through “training.”

The campaign aggressively frames gaming as an appropriate activity for women who, as singers, actresses, and bona fide “beautiful people” are far from the geeky gamer girl stereotype. Further, the ads stress repeatedly that gaming is a fun and potentially beneficial way of spending limited free time – not a time vacuum that will require countless hours of devotion.

All three of the ads work from the assumption that companies are much more likely to succeed selling to women if players are courted with casual games for hand-held systems.1 Two of the three games featured fall under this category; the third, New Super Mario Bros., has a definite nostalgic appeal for women who may not be coming to gaming for the first time, but returning after abandoning the “classic” Nintendo games they played in childhood. In the “behind the scenes” clips provided at the “I Play for Me” site, both Tyler and Ferrera mention games they had played as children.

Whether players are returning to a pleasurable activity from childhood or picking up a new form of stress relief, the games are marketed in “I Play for Me” as an affordable indulgence comfortably confined to spare moments. Further, while the description provided in the site’s copy suggests that women may play the games around friends, none of the TV spots or game descriptions do much to suggest that women play the games in community – whether competitively or non-competitively, locally or remotely.

As a counterpoint, consider the Mountain Dew Game Fuel ad in which the soda, “cranked up for Halo 3,” is enjoyed by an American player who has just concluded an international ass kicking. The “I Play for Me campaign” sells a kind of feminized gaming, non-competitive, personal, and practically private – a kind of domestic sphere of gaming, where women serve as caretakers, indulge in childhood pleasures, or work to better themselves.(Nevermind that the DS is wireless enabled, a fact never mentioned in the TV spots, and somewhat buried on the web site.)

Underwood utters a bit of semi-feminist sentiment in the “Behind the Scenes” video paired with the ad featuring her:

“For anyone who says Nintendo is for boys, I don’t think that they’ve seen all the games and everything. There’s stuff for everybody, which is really cool. And, in most cases, you know, the girls might actually be better at it than the boys, so the boys better watch out.”

However, little if anything in the “I Play for Me” campaign suggests that women might actually compete with men in gaming or anything else. Women may play for solo pleasure, but not for points or glory. The ads for the Nintendo DS display the system as a toy for members of the Sex & the City generation, who, for all their advances, still find themselves separated from men and unable to compete.

1. “I Play for Me” features Carrie Underwood with a “metallic rose” Nintendo DS.