TV Cooking Shows: The Evolution of a Genre

Classic examples of the Early Period of television cooking programs

Television cooking shows are as old as the medium itself. How is it that the genre has withstood the sharp elbows of airwave competition for over sixty years, especially given their former association with dull, prescriptive women’s programming? Despite the inherent artificiality and non-biological character of the particular entity of television cooking shows, the answer to their continued existence lies in the laws of nature. One can periodize televised cooking shows as falling into the Early (1946-1962), Middle (1963-1992), or Modern (1993-present) eras. What follows are some of the major tenets of the biological theory of evolution applied to the genre of TV cooking programs from the Early Period to the present.1

In the Early Period of television broadcasting, the landscape was rapidly populated with locally produced homemaking shows hosted by prim home economists and righteous nutritionists. These shows exhibited traits inherited practically wholesale from their radio progenitors. In the Modern Period, however, reproduction has become a central concept of television programming.

For example, Ruth Lockwood, the producer of the groundbreaking “The French Chef” subsequently created “Joyce Chen Cooks” whose host was the first of many to be dubbed “the [ethnicity/nationality] Julia Child.” Chen, “the Chinese Julia Child,” even used the same set as her predecessor. A Modern Period example looks at “Food 911,” wherein beefcake chef Tyler Florence visited helpless damsels in their suburban homes when they were unable to figure out how to make pot roast before husband got home. Nearly a decade later – with no extinction of “Food 911” in sight – chef Danny Boome hosts “Rescue Chef” wherein the hottie chef is prevailed upon to visit home cooks and help them avoid cruel casserole criticism from their predatory families. Other examples include the interbreeding of Julia Child and Jacques Pepin resulting in “Julia and Jacques: Cooking at Home”; “Iron Chef” spawning “Iron Chef America”; and the multiple gene expressions of celebrity chefs like Emeril Lagasse, Nigella Lawson, Bobby Flay, Jamie Oliver, and the most fecund of all, Rachael Ray. 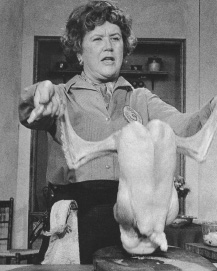 In the Early Period, individual members of the species were virtually indistinguishable to the naked eye (see first image). Throughout the period, however, mass consumption of processed foods and the exposure to harmful chemicals caused mutations in some pockets of the population. “Can Opener Queen” Poppy Cannon appeared on various television shows touting the wonders of using canned cream soups as the base for almost any dish. The Modern Period sees her direct descendant in “Semi-Homemade Cooking” host Sandra Lee.

Most Early Period programs died out because their producers were not yet aware of the importance of personality and “entertainment values.” As television producers and audiences became more savvy and choosy, only the fittest (watchable) survived. The theory of natural selection holds that organisms produce more offspring than can survive. This is illustrated not only by the number of cooking shows that come and go overall in the Modern Period but also on a micro level. Rapid reproduction of competition-style cooking shows is centered on the very notion of survival of the fittest. Those with harmful (e.g. “bitchy” or “cry-baby”) traits are eliminated one by excruciating one. While many of the contestants are competing for a post to run a restaurant, others are hoping to host their own cooking show. Because the Food Network ecosystem could not possibly support them all, the producers cleverly arranged for a controlled natural selection contest in “The Next Food Network Star.” 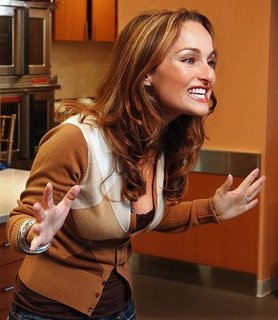 Giada de Laurentiis exemplifies the virility of the Modern Period

In the Early and Middle periods, cooking shows were essentially recipe instruction shows. The Modern Period saw the emergence of a new species: the out-of-studio food show. Chef-author Anthony Bourdain’s adventure-travel show “Cook’s Tour” started on the Food Network. But over time, Bourdain drifted too far off the continent for the likes of the Network brass who felt that their constituents weren’t so good at using maps. He eventually migrated to the Travel Channel where he was free to roam Asia and Africa in search of spiky and malodorous edibles. A couple of years after Bourdain’s “No Reservations,” Andrew Zimmern emerged with “Bizarre Foods” which likewise involved consuming things like jiggling brains in far-flung places. The two hosts live in harmony on their new island and occasionally appear together enjoying semi-deadly foods.

Without being schooled on the history of the genre, the average person could be excused for assuming that Julia Child was the common ancestor of the modern species. However, the first member of the species was James Beard who extolled the gastronomic pleasures of food in “Elsie Presents James Beard in ‘I Love to Eat!” The following year, Dione Lucas appeared, fixing to teach fancy French cooking to housewives. The inhospitable mindset of the Early Period – food is sustenance and cooking is a chore — did not allow Beard and Lucas to thrive. In 2005, researchers discovered that hidden genetic information unexpectedly reappears in later generations.2 A National Science Foundation press release stated, “Lolle and Pruitt postulate that the “lost” genetic information securely resides outside the standard genome and is only retrieved under particular circumstances when it may be beneficial to restore genomic sequences back to an ancestral state.”3 This may explain why in the Middle Period, the Beard/Lucas gene reappeared, expressed in Julia Child, Graham Kerr and a host of offspring. Two advantageous conditions were at last present: the widespread adoption of television values and interest in food as cultural capital and a form of self-expression. As Frank Bruni wrote of Bravo’s competition cooking show, “Top Chef,” “Its narrative arc and razzmatazz editing may take it a long way from Julia Child’s ‘The French Chef’ and the beginnings of food television, but it’s a recognizable member of the same family.”4 Bruni clearly grasps the scientific underpinnings at work in this genre. 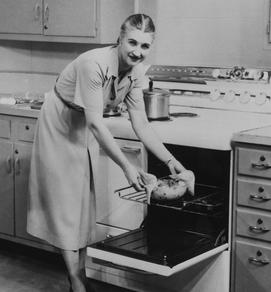 Even though Early Period host is not exhibiting erect posture of Modern Period host, this attribute should not be overdetermined.