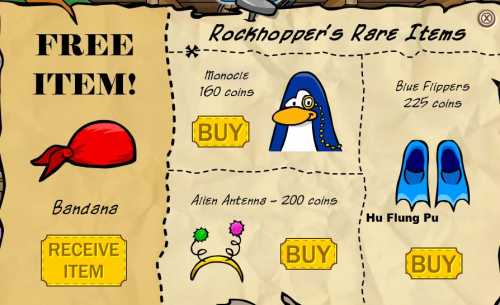 Club Penguin offers a continually updated array of clothing, accessories and furniture for players’ penguins. Though anyone can play the game for free, shopping is only an option to members who pay the monthly $6 subscription fee.

Earlier this year, in their 2008 Internet Investment Guide, analysts at JP Morgan declared that they were “bullish” on virtual worlds for children because such spaces allow kids to play in safe, closed, and branded spaces. Referencing research conducted by eMarketer, the report predicted that more than half of American children would regularly visit virtual worlds by 2011.

Club Penguin, which Walt Disney recently purchased for $700 million, is the most well-known of these branded worlds, but the arctic-themed playground is merely the tip of the iceberg. BarbieGirls, StarDolls, Lego Universe, Bella Sara, and Whyville are just a few of the virtual worlds that actively court children. According to the industry association Virtual Worlds Management, there are now more than 100 virtual worlds focusing on kids, tweens, and teens.

However, before you call your stock broker and rearrange your portfolio, you should be warned that the most important thing about youth-oriented virtual worlds is not the number of children immersed in these synthetic spaces. Nor, for that matter, is it the amount of money that advertisers and toy companies have poured into this sector. The truly amazing thing — the trend that deserves the most attention from industry analysts, scholars and parents alike — is the utter lack of imagination displayed in almost all of these on-line spaces. 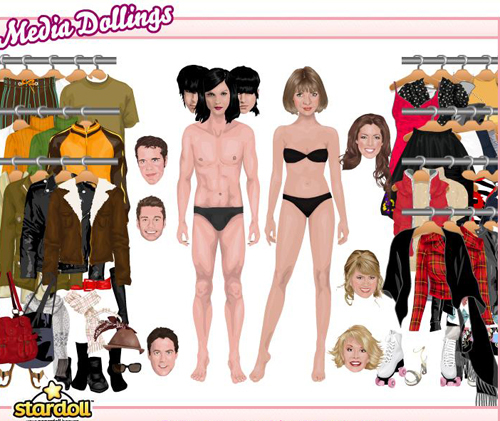 Focused on “fame, fashion and friends,” StarDoll invites players to select outfits for celebrities such as Ashley Tilsdale, Miley Cyrus and the Jonas Brothers.

Ideological links between youth-oriented entertainment and global consumer culture are nothing new. Indeed, most people over the age of 30 can remember playing board games that inculcated hegemonic attitudes related to consumption (The Game of Life), acquisition (Monopoly and Pay Day), labor (Careers) and imperial expansion (Risk, Battle Ship, Stratego). But those were board games. At least in theory, virtual worlds are capable of offering more. So much is possible in these youth-oriented worlds, but so little is accomplished.

Consider the world of the Barbie Girls. At first glance, it might seem that a “paper doll world” would be the perfect way of translating the toy’s appeal to the on-line world. “After all,” one might ask, “isn’t Barbie just about dressing up dolls? Why not dress up dolls on-line?” 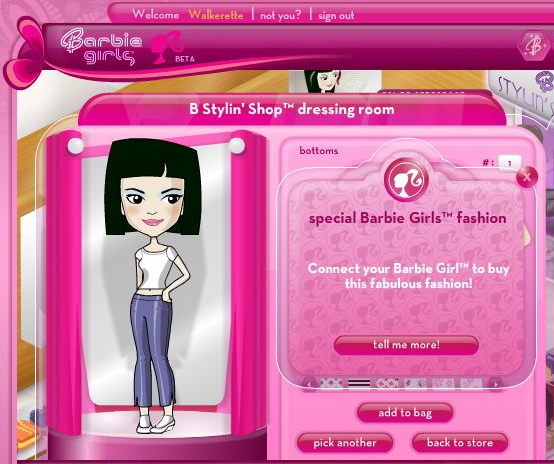 Fabulous fashion and fabulous bling. Barbie Girls(tm) get to have fabulous everything.

The answer, as any Barbie-savvy parent can attest, is that the dolls and the clothes are far less important than the stories that children develop around their toys. “Playing Barbies” is not about wrapping a piece of sweatshop-produced cloth around a piece of sweatshop-produced plastic. It is about children exercising the power of their imagination.

The virtual world Second Life may not be appropriate for children, but the platform makes it possible for beginning users to create their own three-dimensional content. As a result, residents have been able to create a far-flung, idea-rich world characterized by jaw-dropping, user-generated content. The platform also incorporates an accessible scripting language that makes it possible for users to assign actions and behaviors to the objects that they’ve created. In kid-oriented worlds, this degree of creative power is nowhere to be found.

Youth marketers defend their anemic offerings by arguing that worlds like Second Life pose serious problems in terms of content moderation. As soon as open-ended content generation tools are folded into the environment, even a constrained chat window can be used to generate offensive content or to express potentially dangerous questions (e.g. “How old are you?” and “Where do you live?”). According to many platform operators, the creativity lockdown is necessary in order to protect users.

This is an easy excuse. Too easy. It does not hold up under further scrutiny. As Makena has demonstrated with their teen-oriented world There.Com, the threat of objectionable content can be minimized by developing a system for moderating all user-generated objects before they are instantiated in the virtual world. In a similar manner, the possibility of inappropriate solicitations can be addressed by deploying a team of human beings and bots who would scan the chat channels for dangerous interactions.

The myth that “branded virtual worlds” are a safe environment for children is particularly frustrating. We can all agree that on-line pedophiles are a tangible risk, but we have developed strategies to protect kids from the reach of such dangerous individuals. Parents and Internet service providers have spent more than a decade developing strategies for identifying such threats.

When one contemplates the explicit rationale that underpins youth-oriented virtual worlds, one has to wonder “Who is the real predator here? What about the companies who want to deliver my child’s ‘eyeballs’ to advertisers?” At a recent industry gathering, one panel un-ironically expressed the dominant mindset with the tag-line: “Kids and Tweens: Why virtual worlds are the new Saturday morning television.”

The thing is this: virtual worlds offer so much more than Saturday morning television. Even in these early days, when the technology is in its infancy, these tools are capable of unleashing the human imagination.

Within the next few years, someone will figure out how to weave multiple layers of user safety around a youth-oriented platform that offers the creative power of Second Life. When this happens, Club Penguin’s igloos will melt. When children are allowed to create their own “Never Never Land” rather than just playing in branded sandboxes created by boring adults, there will be massive defections from the worlds of Barbies, Webkinz, and StarDolls. The shackles will be empty, and the children will be free.

I can hardly wait.