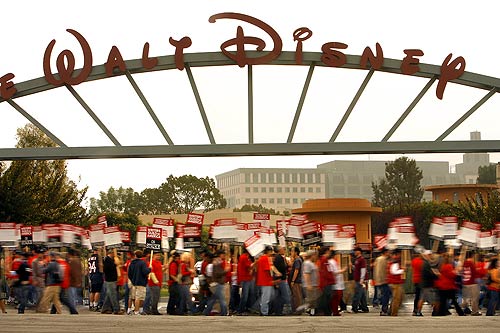 There are certain perks to teaching film and television in the greater Los Angeles area. Professional industry guest speakers are abundant, and field trips to studios and networks are easily negotiated. It is quite easy to stay current with the industry when the industry is your backyard. I dare say that there are even more perks to being a student of film and television in southern California, although many students who have grown up here don’t know how lucky they have it.

Students around here don’t seem to realize that living at home with Mom and Dad while interning at Sony Pictures or Dreamworks isn’t the norm for the vast majority of college students in the nation. Students in the greater Los Angeles area are constantly bombarded by local news coverage of the industry they hope to one day enter and, quite often, the news concerns poor business dealings, mismanagement, layoffs and pending or current strikes. As a college student in the Midwest, I didn’t have a chance to become jaded about “the business” of writing before I ever got the chance to develop my passion or hone my craft. My students however can’t turn on the local news or read a local paper without seeing their professional futures flash before their eyes. The latest WGA strike affected these students in a way most other television and film students in the nation can’t understand.

In the Radio-Television-Film program at Cal State University, Fullerton–where I am a member of the faculty–seniors must complete a capstone internship course before graduating. The past two semesters I watched graduating seniors struggle with the very personal impact of the Writers’ Strike on their education. In my classes I often discuss the importance of unions, especially in our industry. Unlike any other industry in the world, there are many people who would be willing to “work” in film and television for free, just for the chance to say they work in film and television. The unions protect those who work in this industry from being “taken advantage of.” Our RTVF Department also has the benefit of having at least three WGA members on its faculty at any given time. So when the WGA officially went on strike in November 2007, many of our students already understood the issues at hand and supported the efforts of the WGA, at least intellectually. However, they soon found that supporting something intellectually and dealing with it in actuality are two completely different propositions. Many of our students found they had to now cross WGA picket lines to get to their internships. This was the first time many of them have ever even encountered a picket line, not to mention the decision whether or not to cross one. 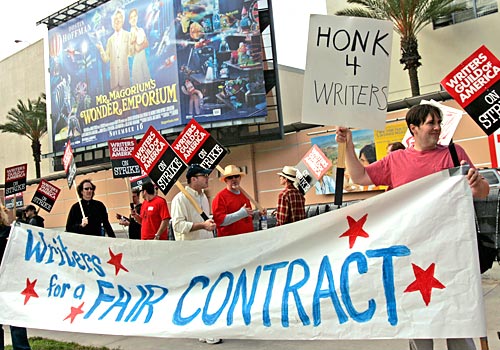 The line at FOX Studios, which some of Jenkins’ students encountered first-hand

Now, to put things in perspective, many CSUF alumni walked the picket lines as actual members of the WGA and many alumni crossed the picket lines in other production capacities during the strike. Many more alumni lost their jobs during the strike as productions came to a halt and many shows didn’t come back. Many students lost their internship opportunities altogether as production companies and studios decided there wouldn’t be enough work for them. These students didn’t graduate “on time.” All of this may suggest that the decision whether or not to cross a picket line is a no-brainer for a graduating senior. On the contrary, many students found it a very difficult choice, one that brought about a soul-searching anxiety that involved an exploration of ideals, professionalism, work ethic, and loyalty. This exploration brought about a very interesting dialogue through our department’s listserv.

One of our writing students was interested in organizing a field trip of sorts to walk the picket lines with guild members. The show of support was to be orchestrated through the WGA strike leader for the location being considered. The student sent out an email in order to both create and gauge interest. The email started quite the heated debate between students–both current and former–working in various capacities in the industry. Some students wanted to walk the line to show their support as many of the other California institutions were doing. Some innocently said it would be a great chance to network with writers, which was quickly jumped on by others as the worst thing to say under the circumstances. 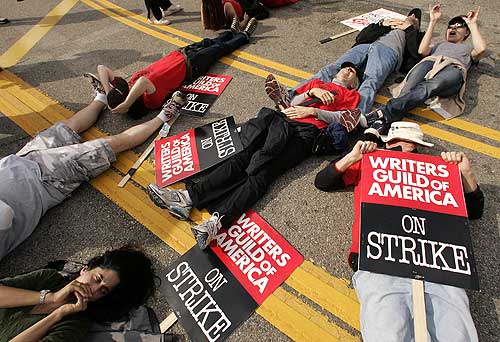 During the fall, one of my students completed his internship at FOX Studios in Century City. He was working with FOX Sports. His show didn’t actually have any writers on staff; however, the studio was located right by the main entrance off of Pico Blvd. Every Monday through Friday he would pull into the lot with roughly 100 writers picketing. He couldn’t help but feel that the writers were somewhat upset that he constantly crossed the line for several months. Another student of mine was also working at FOX Sports. She only saw a few picketers at a time because she started her day normally after most of the picketers had left, but she recalls that the one time she was there during the day, “It was insane and I was really nervous when I saw it all on the news.” Other students mentioned wanting to wave at former instructors on the line as they were driving through, only to quickly realize their picket line faux pas and attempt to avoid eye contact altogether. One of the founding members of our department, who is no longer teaching, is a script doctor and WGA member. He was pictured in the LA Times holding a picket sign and was quoted in Variety regarding the strike. A student who had studied with, and respected, this particular instructor very much would actually try to avoid being seen by him by ducking down behind the wheel while driving onto the lot. He desperately wanted to just say “hi” to him, but felt that he was violating a code of honor instilled in him by this same instructor. I know of one student who was outright asked to scab during this time. Although he had crossed the picket line to get to work, this line was a line he knew he absolutely should not cross.


News coverage from NBC on the then-ongoing strike

So, what does all this mean? Well, honestly, I think it means that we’ve taught our students well. Comedy writer Bill Masters said something that I wish I could claim as my own, “I didn’t mind striking; I was good at it.” Working and non-working writers walked the picket line together. Whether they crossed the line or not, our students understood why the writers were out there. They knew why it caused production to stop. They learned how things work in “the business” that is television. Without the unions and the guilds, many of us would never rise beyond “internships” to legitimate positions that help pay our mortgages, our children’s education costs, and our health and car insurance.

Whether or not someone chooses to support one side of an argument over another should be based on the facts as presented by both sides. My colleagues and I presented our students with the facts surrounding the WGA strike. Armed with the facts, the vast majority of our students agreed writers were getting a raw deal and deserved better. Students perhaps understood the issues even better than those of us “old schoolers” who still watch network television shows as they are scheduled to air. The issue for me as an educator isn’t whether film and television students marched side by side with the writers or crossed picket lines in order to graduate on time. I happen to know that many did both. As an educator the issue was whether or not they learned something. They were both unfortunate enough and lucky enough to experience some of the effects of the strike. If educators believe that students don’t understand or appreciate the reality of the entertainment industry, then perhaps it’s because Hollywood still seems so far away for so many of them. As educators we can close that gap best we can by preparing our students about the business of the art our students will hopefully one day find themselves employed, regardless of where they may find themselves geographically.

Image Credits:
1. The picket line at Walt Disney studios
2. The line at FOX Studios, which some of Jenkins’ students encountered first-hand
3. Striking writers lie down on Pico Boulevard in front of FOX Studios