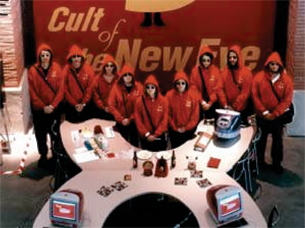 In Lost Subjects, Contested Objects, a slender and elegant volume on pedagogy and psychoanalytic theories of learning, Deborah Britzman makes the following observation: “artists ask us..to imagine that communities are something to do, something to make. And with these… perhaps education can begin.”1 This certainly describes the artistic and pedagogical enterprise of the Critical Art Ensemble, a media and installation group whose founder is currently under indictment for cultural practices which the federal government originally linked to bioterrorism. Subsequently the charges were changed to mail fraud. Under the Patriot Act, prison sentences for mail fraud can extend to 20 years.

The Critical Art Ensemble (CAE) is “a collective of five artists of various specializations dedicated to exploring the intersections between art, technology, radical politics and critical theory.” 2 The group formed in 1987. Their earliest media productions were what might be called “traditional” avant-garde art. That is to say they were made for people with a certain kind of cultural capital, who could easily get the references and enjoy the jokes. In the 1990s, CAE began engaging in direct political action, advocating what they called “digital disobedience.” They also wrote slim theoretical texts that simultaneously engaged ongoing debates in media theory and advocated a return to macropolitics. Electronic Disturbance (NY: Autonomedia, 1994) is perhaps the best known of these. 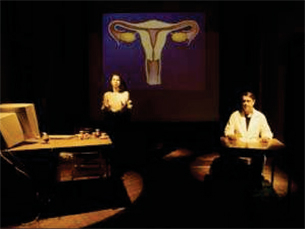 Most recently, CAE has begun using media and real materials to blur the lines between art as largely symbolic provocation and art as a pedagogical tool designed to put information directly in the hands of the people. Organizing installations and theatrical events around such topics as bio-genetic modification of food, eugenics, and biological warfare, CAE has begun to see themselves as “tactical media practitioners” rather than as artists. 3 They maintain a strong web presence, posting graphics and text from their already-mediated shows online. Their goal is to use media to make a radical intervention in the Spectacle.

Critical Art Ensemble installations look something like open science classrooms. There are art works on the walls and around the gallery, but the majority of space is taken up by computers and lab equipment. Members of the collective, dressed in white coats, lead visitors through scientific experiments with inert chemical compounds, encouraging them to get first hand knowledge of what happens to organisms under certain conditions. Computer stations provide textual information about the nature of various compounds and their effects on the human body and on the environment. Members of CAE are largely self-taught in science and part of their mission is to demystify science, to convince an increasingly befuddled public that science can be understood by educated lay people. They encourage citizens to make informed decisions about the biological and chemical substances which have become such a part of everyday life. This work has put the group at odds with large corporate interests. When CAE targeted a Monsanto product, RoundUp Ready Plants, in its exhibitions at the Corcoran Gallerywidth=350 in Washington D.C., and at the World Information Organization in Amsterdam, Monsanto obtained cease and desist orders.4 But, as Stephanie Kane and Pauline Greenhill note, until recently “CAE regarded the condemnations and threats from police, lawyers, churches, political figures, and the FBI as part of the rough-and-tumble of public reactions to provocative public art. Indeed, in the past CAE has been encouraged by critical dialogue. The charge of bioterrorism, however, shifts the terms of the debate.” (60). 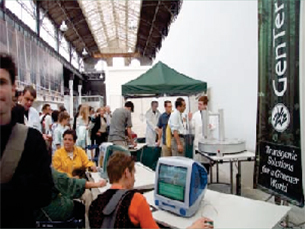 On May 11, 2004, Steve Kurtz phoned 911, after waking to find his wife—Hope Kurtz– unconscious in bed beside him. Ms. Kurtz had died in her sleep. But it was not only her death that worried the emergency aid team that came in response to Kurtz’s call, but also the laboratory equipment and inert biological compounds which Mr. Kurtz uses as part of his art work and which he had stored in his home. The 911 team phoned the FBI (this is where things get murky — because the group that actually came was the Joint Terrorist Task Force). Steve Kurtz was arrested on suspicion of bio-terrorism. Hope Kurtz’s body was impounded (which meant that it couldn’t be released for a funeral). Kurtz’s equipment, computer, art supplies, books, films and biological material were confiscated. The Joint Terrorist Task Force Agents also took Mr. Kurtz’s car, his house, and his cat.

Authorities searched Kurtz’s home and tested the biological material for two days, before declaring that there was no public health risk in Kurtz’s work and that no toxic material had been found. Kurtz was allowed to return to his home on May 17, his car and cat were released, and his wife’s death was attributed to heart failure. But while the case should have ended there, it was only beginning. In June, Kurtz and other members of the Critical Art Ensemble were brought before the Grand Jury and again investigated on the charge of bio-terrorism. Again it was found that there was no evidence that any members of the Critical Art Ensemble had been involved in bio-terrorism. Nonetheless, their case was referred to a Federal District Court and on July 8, 2004 the Federal District Court in Buffalo charged the Defendants with four counts of mail and wire fraud, charges connected with the purchase of the inert biological material used in their installation work. Dr. Robert Ferrell, Professor of Genetics at the University of Pittsburgh, the researcher who helped CAE procure the biological material, was similarly indicted. They were enjoined from performance, travel, or even speaking about the case. In addition, Mr. Kurtz has been subject to random visits from a probation officer and to periodic drug tests. 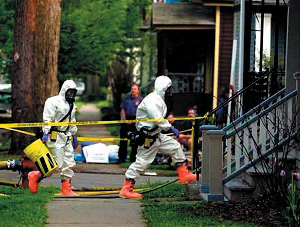 The art community has been understandably nervous about the chilling effect of the case and has rallied to Mr. Kurtz’s defense. But the scientific community, too, has been disturbed. A guilty verdict against Mr. Kurtz could have serious implications for scientists who wish to share research—including inert compounds—with colleagues.

Space does not permit a full account of the history of the case to date. The Critical Art Ensemble Defense Fund website has excellent coverage for people who wish to know more about the judicial status of Dr. Ferrell and Mr. Kurtz. And Lynn Hershman Leeson’s award winning film about the case, Strange Culture (2007) is a good resource and help (Leeson is donating money from DVD purchases and rentals to the CAE defense fund). As Britzman notes in the quote I cited at the beginning of this column, artists ask us to imagine that “communities are something to do, something to make.” What those of us following the case are wondering now is precisely what kinds of communities—real or virtual—we will be able to make once the CAE case is decided.