The FCC has created an entire website devoted to DTV education

In an essay entitled “The Forthcoming DTV Tsunami”, I wrote about the possible social ramifications of the conversion from analog television to digital television (DTV) slated for February 18, 2009. I argued that the conversion was poised to become a disaster for the tens of millions of Americans who use and rely on over-the-air television and don’t have the money to get cable or satellite service, or buy a digital-ready TV set.

In the time since that essay, we now have some answers to some of the questions I raised. The resulting picture is crystallizing – and horrifying.

The Poor and The Needy

The most urgent need involves those Americans who use analog TV. There is a voucher program in place, where Congress has allotted $1 billion for vouchers to offset the cost of analog-to-digital converter boxes. The program launched on January 1, 2008, and the response has been brisk – requests for 1.9 million vouchers from a million-plus households were filed after the program’s launch. Even so, that’s still a small fraction of the 33.5 million coupons that Congress has promised to fund – assuming that such a number is sufficient.

Meanwhile, the Federal Communications Commission (FCC) has announced a series of educational workshops which the FCC said will “focus on communities that have been identified as being likely to be disproportionately impacted by the transition and least aware of it. These communities include seniors, minorities and non-English speakers, people with disabilities, low-income earners, and those living in rural areas.”

The workshops are all held in the FCC’s Washington DC headquarters and webcast via the FCC’s website – but needless to say, getting the money to fly to DC to attend the workshops, or even knowing to visit the FCC’s webcasts, are not terribly viable options, and fall dismally short.

Representative John Dingell (D-MI) described the stark details: “In 2005, the Government Accountability Office (GAO) found that 21 million homes – nearly one in five of all television-equipped households – rely on free, over-the-air broadcasts. Of these households, almost half have annual incomes of less than $30,000, and two-thirds are headed by either an individual over age 50 or a native Spanish speaker. Clearly, those expected to be most affected by the transition will also be the most difficult to reach.”

Ultimately, if these communities find out too late about what happens, they could – in the words of Ricardo Byrd, president of the National Association of Neighborhoods – suffer from “go black shock”, where TV service will simply “go black” after analog TV ends.

The result could be “the mother of all consumer backlashes”, to quote FCC Commissioner Michael Copps in testimony before Congress. And who specifically in the government would be the target of this collective rage? In other words, who’s in charge here? 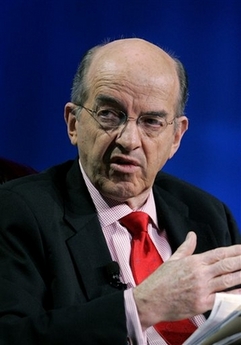 FCC Commissioner Michael Copps has been a vocal critic of the U.S. Government’s lack of preparedness in the DTV transition.

The answer, according to GAO investigator Mark Goldstein: “It is pretty clear to us that there is no one in charge,” either within the FCC or the National Telecommunications and Information Administration, the two agencies working on the conversion. Worse, FCC chair Kevin Martin acknowledged that “No formal plan is publicly available”, and the GAO echoed: “Despite efforts by the public and private sectors and ongoing coordination, we found that no comprehensive plan for the transition exists.” Thus, there’s no way to gauge success formally.

There are attempts by some government officials to begin to make such a gauge. FCC Commissioner Copps has called for a trial run of the DTV conversion in a test community to see what would happen. But Copps’ call has attracted little interest among FCC staff or potentially affected communities. That’s not much of a surprise: Copps’ call is reminiscent of an actual trial run, Operation Dark Winter, which in June 2001 tested the U.S. government’s response to a mock biowarfare attack, and discovered the government was swiftly overmatched (Operation Dark Winter was called off after four days due to exhaustion of the participants).

Worse still, there’s precious little in the way of government money allotted for educational efforts – about $2.5 million for an educational campaign addressing mostly America’s hardest-to-reach populations. That could be increased to as much as $20 million within the 2008 Bush Administration budget, but it’s still a pittance by government and international standards.

But, we’re told, industry help is supposedly on the way. The National Association of Broadcasters (NAB), the commercial broadcasters’ lobby, have promised $700 million worth of advertising devoting time to public service announcements (PSAs) about the DTV transition. Supposedly, the NAB has gone beyond, to make as a goal “98 billion impressions as part of its campaign, amounting to 300 impressions per person in the U.S.”

There are some problems with this campaign: Of the six tactics articulated by the NAB to raise public awareness, five don’t use the broadcast TV medium itself and are instead cheap measures like establishing a speaker bureau, making Spanish-English websites, and setting up a mobile truck resembling a large-sized TV.

The NAB’s tactic involving TV is using PSAs. But as a study by the Kaiser Family Foundation learned, PSAs run most often in the overnight hours (midnight to 6am) and only 13% of PSAs actually run during the most-widely-watched primetime hours between 8pm and 11pm.

And many of the PSAs which have aired tend to imply that the burden of action falls predominantly on the viewer or consumer. And the suggested action mentioned is to encourage the viewer to visit a website (not an option for the poor on the other side of the digital divide) or call a phone number (not an option for non-English speakers). 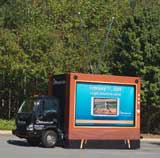 And the efforts to raise public awareness, which all sides agree are succeeding however sporadically, might be failing in raising public knowledge. A January 2008 survey by Consumers Union found “an awful lot of faulty information” among the public about the DTV transition. Even the vaunted government converter box voucher program was unknown by 73% of those surveyed who actually planned to get a converter box.

Perhaps most stunning of all, another survey by the Consumer Electronics Association said that 22% of analog TV owners plan to “do nothing” when the conversion occurs.

To quote FCC Commissioner Copps again: “We’re going to pull the [DTV conversion] switch and pray to the Lord that everything works out fine.” Copps also said: “Pulling the switch on stations all across the land at one and the same time in February 2009 is going to be a real throw of the dice.”

In rolling the DTV policy dice, we might just get lucky and everything will end up fine. But signs strongly suggest that there aren’t many winning rolls left, and the dice seem to be increasingly loaded against the public.