Toaster-Frakkers and Remote Controls: Technophilia, Cylons, and the Archival Drive 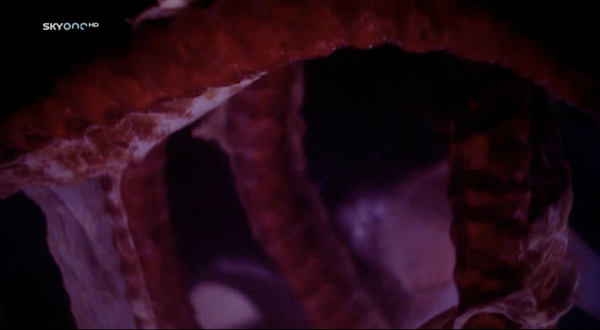 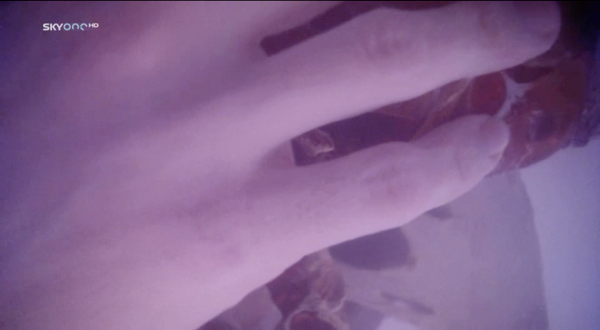 The interpenetration of machine and flesh

The term “technophilia” — which is often associated with sci-fi and cult genres — generally denotes an almost comically overdeveloped love affair with technology. But, in exploring the notion of technophilia in relation to Battlestar Galactica, I would ask, for the moment, that we take the notion of technophilia quite seriously as a way of conceptualizing our own relation to technology and the construction and operation of desire in our everyday lives. What is it in technological objects and our interactions with them that generates such a powerful affective charge? These are questions that Battlestar Galactica also takes very seriously through its portrayal of the Cylons as living embodiments of technology, making it an exemplary instance of the dynamics that I am bringing together, here, under the title of technophilia. Before discussing the specifics of the program, though, let me detour for a moment to explain the concerns that are inherent to technology and how desire and technology interrelate.

Technology is, itself, more than simply a means to an end. While technology is something that we understand (rightly) as a tool that we use in facing problems ranging from the astronomical to the mundane, the immediate use-value of technology doesn’t seem fully to account for humanity’s romance with the machine. To begin with, we could say that technology extends our reach in the world both literally and figuratively as it makes possible and brings into being new possibilities themselves what would otherwise fall beyond our grasp and perhaps even our understanding. This becomes more evident when one considers the role of modern, autonomous technology, which works precisely at the level of possibility and potential; it serves to reveal the potential hidden within the natural world and, at least we hope, the potential within ourselves as well. Technology stands always in relation to this potential as a way of unlocking it and keeping it in reserve, always ready for future use, and, in this way, technology can be thought of as framing or even structuring this potential: giving it some manageable form that brings it closer to us and gives us access to the potential that lies at an imperceptible level beneath the surface of our knowledge and beyond the borders of our everyday apperception. 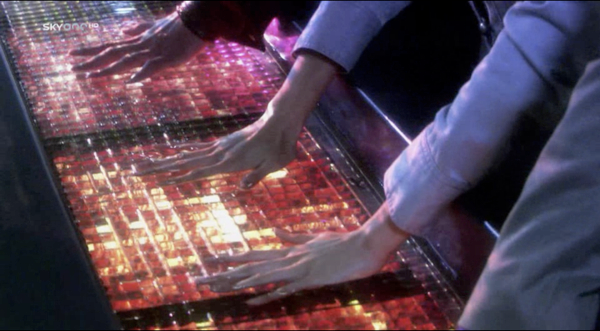 The Cylons interface with the control center of their ship

In this sense, the power of technology is to unveil the potency of the world around us and to give us the means to bring about whatever ends. Rather than existing purely to facilitate an end, technology exists as pure means and, as such, technology seems both to draw us nearer to the possible satisfaction of our desires and yet stands as a permanent intermediary between us and the objects for which we strive, thereby enacting a dynamic in which those things that we want are brought closer to us, while, at the same time, deferred. In this way, technology would seem not only to interact with our desires but also to mimic their operations as well. Further, if technology seems to exhibit the same structure as our desire, it is important to keep in mind that technology also gives structure to our desires. Indeed, one might say that technology informs our desires; more-so if, again, we take this word quite literally and parse it, “in-form”, to reveal its roots in a notion of giving shape to something both at a conceptual and material level. I think that it is in this double sense of informing possibility that we find some of the reasons for technology’s affective dimension. Technology lends to our desires a certain structuring aspect that, in the broadest sense, gives form and shape to those things that we love. The Cylons in Battlestar Galactica represent this, in that they give shape to our greatest hopes, fears, and questions concerning technology. Cylons bring together this intersection of possibility and desire within real bodies that are shown repeatedly as objects of desire and that bring about the literal instantiation of the concerns of technophilia that I have traced. Yet keeping in mind that the Cylons are televisual representations and not, at least in our world, truly existing technological forms, another aspect of the technophilic emerges: the way that our fears and desires, within the context of technology, are literally recorded and compiled by technology, in this case through the medium of television. Thus, one of the most interesting things about Battlestar Galactica is how it adds to the general archive in which these questions of technology are addressed.

An example of these aspects of Battlestar Galactica and the representational work performed by the Cylons will no doubt help to ground what could otherwise seem like a highly abstract discussion. It is useful, then, to begin by looking at how the Cylons are portrayed and some of the ways in which they embody the issues and problems that have been raised here — and we can begin most fruitfully with the concept of the archive. The archive is more than simply an instance of recording, organizing and filing. It has its roots in the systems and principles of technology, which, as previously noted, give shape and informs. Yet, the archive exists more broadly as well as a conceptual technology that produces order providing structure to what might otherwise exist in disarray and making regular the disorganized mass of information that we encounter on a day-to-day basis. The archive is a prime example of how technology therefore also encloses or limits possibility, keeping it preserved and ready for future use. Archives function as a kind of cultural memory and have even served as models for understanding the way that our own memory works: yet, for all that archives are constructed for the purpose of giving form to the past and providing a record of history, what is truly at issue for the archive, given the question of potential that I’ve discussed, is nothing less than the future. Thus, the archive reveals its own position within the phylum of technology (more broadly) through its investment in the possibilities inherent in a notion of the future. In some sense, it is for future generations that we archive in the first place and it is towards the future, via this desire or drive to preserve and bring about these generations, that technology leads us. 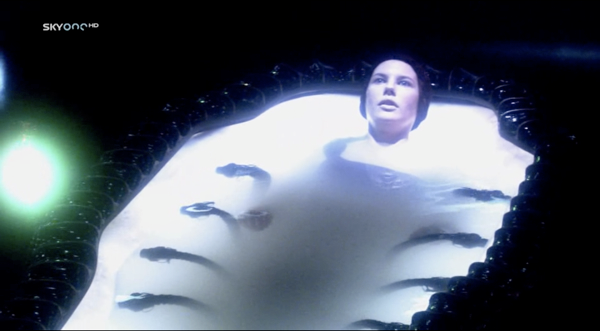 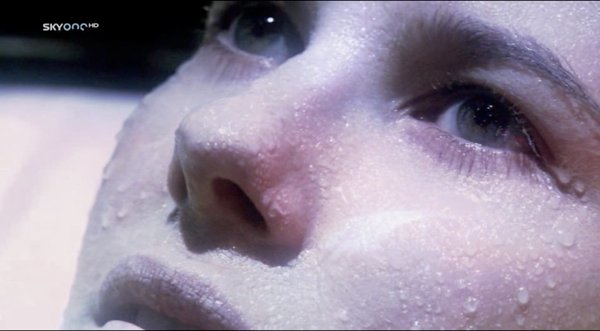 Within the on-screen space of Battlestar Galactica, the Cylons illustrate these questions of technophilia through the representational work that they perform both in relation to the remnants of humanity and in and of themselves. Within the narrative of the show, the Cylons are technological forms that are very much invested in the body and its pleasures and these representations seem to take on the issue of desire and technology quite directly. One question that comes immediately to mind in relation to the Cylons might be: why is it that Cylons need (or want) sexual desires at all, let alone require a highly sexualized society in which “personal” fantasies are literally projected onto the walls and haptic technology (one might infer) extends beyond merely touch-based interfaces into otherwise uncharted territories of inter-cylon interaction? Perhaps the best instance of this can be seen in the figure of the Hybrid, whose interrelation with technology exists beyond an epidermal relation to become, in fact, an actual incorporation of the body within technology. The Hybrid’s body is coterminous with the Cylon ship itself, whose movements she directs, and who, in a fantastic example of the pleasures that technology seems capable of bringing, seems ecstatic at the release of this unlocked potential. Thus, the Hybrid serves as the perfect figure of technophilia within the program. Of course, answers to the questions of sexuality and the Cylons readily come to mind when one considers the narrative appeal and significance of the show to viewers: but, more than that, this question illustrates the position of technology within the economy of our own desires.

As living embodiments of technology, the Cylons represent the fears of the excess potential that may be unleashed by the super-productive capabilities of rapidly evolving technological forms; at the same time, they give us an example of the paranoid logic inherent in a suspicion that some form of an independently desiring technology might deliberately stand between us and the objects to which we are drawn. In terms of the archive, the Cylons represent this technological form at two distinct levels. First, within the narrative of the show, Cylons exist as the logical culmination of the archive: as the perfect system for the preservation and transmission of knowledge in what amounts to an embodied system of serial immortality. Each individual Cylon is a “living” archive of experiences that are passed on whenever one body is killed. Rather than perishing, the consciousness is downloaded and inscribed into a new body that exactly replicates the old in a system of pure memory. And just as the technology of the archive is fundamentally oriented towards the future, so too are the Cylons as they seek guidance through prophecy, search for Earth, and exhibit an interest in the mysterious shape of things to come. 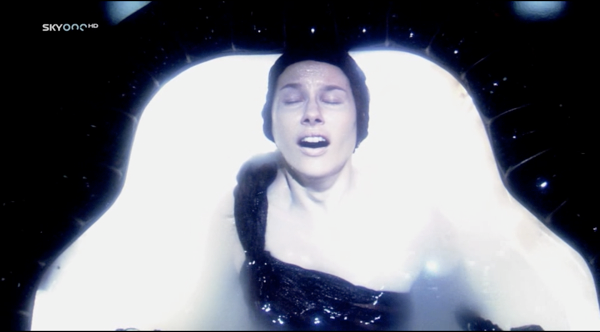 Yet, most significantly for us, as viewers, is the second level at which the Cylons represent and figure the archive, which takes place not within the narrative of Battlestar Galactica but through the way that TV itself functions within this framework of technophilia. One might say that by showing us these representations of technology through the example of the Cylons and the narrative flows of Battlestar Galactica, television is the technology that is actually responsible for bringing these technophilic dimensions to our attention. Thus, television enacts the very mechanisms of technologized desire in how it displays those things that we want yet simultaneously proves to be the barrier through which we can never reach. Television also serves as an archival technology along similar lines to the Cylons through the way that images and sounds are recorded and transmitted. And as TV continues to intersect with new digital media, the possibilities of archiving continue to multiply — as do the promises and limitations, the opportunities and manifestations of technophilia.

David Bering-Porter is a doctoral candidate in the department of Modern Culture and Media at Brown University, studying new media and bio-power through mediations of the body and the archive. His dissertation explores the expression of uncanny vitality in psychoanalysis, science, and zombie movies.

Image Credits:
1. The interpenetration of machine and flesh, screencap provided by author.
2. The Cylons interface with the control center of their ship, ibid.
3. The Hybrid, ibid.
4. The Hybrid’s ecstatic expression as she directs a faster-than-light jump, ibid.