Revisitations and Constant Auditions: The Politics of Placing People 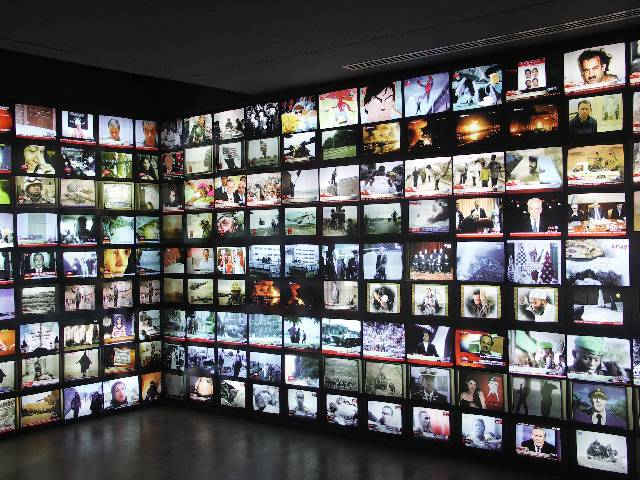 In the throes of writing a book, I’ve decided to maneuver with a major confluence tumbling through my writing: labor and technique. But I’ll turn around first. Watching my back is important.

The bodies bob back and forth just out of sync with the music, waiting for the start of the timer. Their players are scattered across the globe, articulating through screens, shifting perspective at will. They are auditioning, earning points for an opportunity to dance on one of the few main stages in this dance community. They love to dance. They play for free, but spend real cash inside the game for costume, make-up, hair and skin. There are bodiless bodies stacked inside the rhythm and moves from previous motion capture sessions; fleshless dancers skimming keys, eliding their epidermal realities; and a competition that is never broadcasted or announced outside of the circle of participants. On occasion, an unbroken chain of moves is proudly posted on video-sharing sites, against the game’s Terms of Use.

I sit watching images, but not TV. I don’t own one. I watch screens, though. I am caught up in a struggle, but all I can think about is who will win the audition.

At a day rate of $250 up to $450, dancers flood the industrial dance scene of Los Angeles, hoping to become stars, doing what they love best. Many would say what they were born to do. There is a lot of standing around. To get in the door. To audition. To show them what you’re working with. To get the camera to speed. To get into make up. To get the balls on for the capture. Ready? %^&*, I mean 5678. Constant bobbing back and forth, trying to keep the muscles warm and the choreography clear because this may be the 4th audition this week.

Dance seems to be hot right now. The body in motion without dialogue. Words are an issue. Talking bodies. Don’t think about it too much, it will show up in the dancing.

I watch clips of So You Think You Can Dance and Dancing with the Stars on YouTube. Competitions. Grueling hours of preparation. Acquiring technique. Pushing out memories, evicting them from their corpo-realities, the bodies of the performer-competitors change the way they articulate: gait, shifts in the hips, tilts of the head, widening of eyeballs. They begin to converge across bodies. Technique. It takes technique and dedication to put on a good show. To get over a hundred percent out of your organism.

To fake it. To make it look good. To make the viewer believe. To entertain.

I never realized I lived in a company town until the Writers’ Guild went on strike. Everywhere, our daily Los Angeleno rhythms have been altered. Mostly there’s more space: on the streets, in the Trader Joe’s, and now, on the airwaves. It’s a daily vigil, waiting to see when it ends. 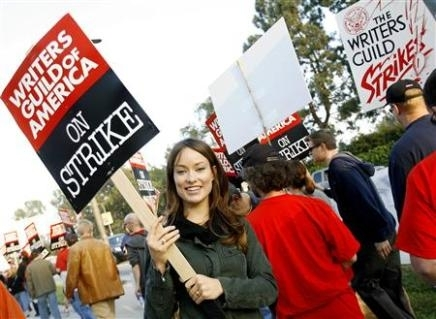 Well into 70 days, this strike has my attention, not because my viewing pleasure has been disrupted, but because dance seems to be positioned to help the AMPTP break the union’s resolve.

As a major money-maker for reality TV, and as the foundation of the new wave of on-line video games, dance could figure prominently in this battle for equity in the extension of televisual brands into the WWW as streaming commodities. While the Writers’ Union battles to protect the value of their handiwork across platforms, rumors fly about a missing pilot season and massive preparations for reality television programming. Given the popularity of dance right now, and a national fetish for competition, chances are good that more shows featuring the unknown dancer will crop up on screen.

On January 7th, Dance Wars, a Fame-throw back, (without the riveting Miss Debbie Allen, and, ahem, dialogue) was launched by ABC. How can they be this blunt without irony?

A missing pilot season is potential windfall for the muted, dancing body.

The major concerns of the writers’ strike dovetail with concerns of my own over motion-capture of dancers, labor laws, and copyright. The writers want a contract that accounts for and rewards their labor no matter the digital platform, while a dancer’s labor often disappears into the code of an animated object/being. Though it feels like two disparate issues, really it is one: how or what will we call labor, product, performance and entertainment in the age of the digital? Now that just about anyone can mashup existing intellectual property, how do we reward and protect creative labor while we insist on stripping it from the bodies that produce it?

There is no dancers’ labor union. One must rely on a savvy agent to get booked enough to join SAG. Dancers are literally a dime a dozen out here. The profession itself makes it difficult to organize since young bodies are in demand and the work schedule hectic. Grover Dale’s Answers4Dancers.com, a clearinghouse to train young dancers to pay close attention to the business side of their feet, does not mention the writer’s strike. Given that Mr. Dale spent a good deal of time investigating a labor dispute on the 2007 Beyoncé tour and siding with the dancers, one would expect a pronounced position.

But there is a Dance War to be won. And that means more auditions.

Battling, competing is not benign in this format, no matter how frivolous the show makes itself out to be. Dancer-singers techniqued into automatons are deployed as placeholders between advertising. Distractions, what their live bodies produce is not seen and must remain unacknowledged: a place for agony.

In Nexon’s Audition, dance moves are coded as data sets that are to be retrieved as a performance against a rhythmic phrase by combining predetermined key strokes. This Korean company has popular versions in Thailand, Korea and China, but the game only launched in the US in April 2007. What strikes me is not so much that there is a massive multiplayer on-line game that is in effect, yet another dance competition, but that it reveals that most contemporary dancing occurs as battle, and is only honored in that frame. Audition literalizes technique: a process of dismembering, literally taking the moving body apart, fixing joints as relational algorithmic equations and creating a database of possible moves that are then sourced as combinations.

Even the live bodies on the stages of SYTYCD, DWTS, DW are transmogrified through digital delivery techniques. Satellite transmission, text messages, key-stroked mutli-camera shoot become a tangible AMPTP thing: a performance vehicle. Are any of these people dancing? The gamer, the competitor? Grappling with the stress of time, and an ill-informed voting producer-audience, reality TV dancers deliver high drama, catastrophe, even ratings. Who needs writers for scripts when we have managed to memorize and traffic in manipulative sit-com and melodramatic techniques?

Marie Osmond faints on Dancing with the Stars

We do. Because when left to our own devices, to the technique, the chilly binary code, we traffic in agony, looking for diversions.

Like turgid SUVs, these dance vehicles block our view of the power inherent in “techniqueing.” 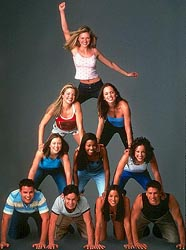 Cast Pyramid from Bring it On

Just on the other side of the tinted windows, we catch a glimpse of the cruelty riding shotgun to our insistence on perfection realized through disembodying technique. Out of sync with our desire for entertainment, this perfectionism exerts power over the vulnerable, the unwilling. Unknown dance sensations who spin dance crazes and styles, only to go hungry while other bodies prance around in mechanized versions of those dances; storytellers that are slipping into dispossession…we could change lanes, or channels, but our sense of the sardonic outstrips us. We think we know dance so we abuse in the name of fun. Those “cheerleading” men held in Abu Grahib holograph through each episode of battling dancers, tied to our competition-crazed televisual dance practices by the very positioning of their bodies for the photos.

The reality of unscripted television has reinvigorated a space for not only lackluster thought, but unin-corpo-rated action. I am not claiming that writers will save the day and a dance union will suddenly force us to claim our ineptitude. Instead, I am hoping we will examine our conspiratorial relationship with the moguls, as we call them out here, and take back our personal stories and dances, lest we continue to force others to entertain us at any price.

Agony, I could have meant it ironically.