Pardon the Competition: ESPN Turns Sports Talk Into a Game 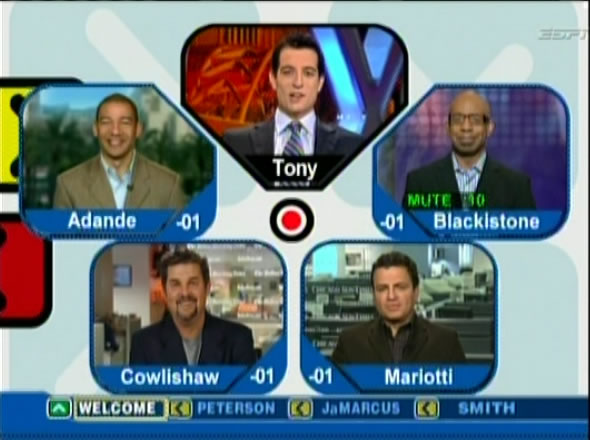 Toni Reali goes Around the Horn

In a recent issue of FLOW, John Jordan hypothesized about what function sports commentators serve given their ubiquity in sports TV programming. This essay is not a retort to Jordan’s argument1, but does address the issue of how one sports network, ESPN, uses its sports commentators to reinscribe the brand of ESPN by actually making sports talk into competition.

ESPN runs two programs daily–Around the Horn and Pardon the Interruption–that are talk shows based upon current sports issues and, more specifically, sports highlight packages. The same packages are recycled continuously throughout the day on virtually all of ESPN’s media platforms. While packages/agendas are a staple structuring mechanism for any media organization, ESPN actually turns the discussions on these two programs into sporting competitions, thus reasserting the sporting brand of ESPN.

Shows such as Around the Horn and Pardon the Interruption create competition between the panelists with scores and, ultimately, winners and losers. Around the Horn centers on “competitive banter” and claims to be the “show that scores the argument.” ATH host Tony Reali sits at a command module, complete with joysticks that “score” points for the most salient and well-argued retorts. Reali faces a bank of four video monitors featuring sports writers from across the USA (also represented by a map in the studio’s mise-en-scene), and the competition ensues that is described by Reali as “ten topics, one winner.” The mise-en-scene of ATH enacts many familiar environments to TV consumers — the remote control, the video game module and Reali’s spectatorship and selection of content/panelist. 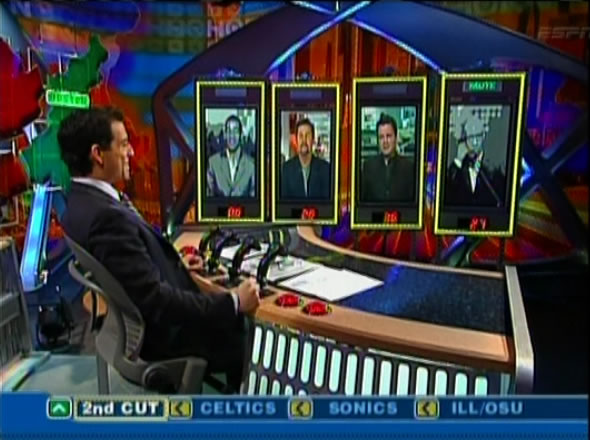 Reali and his ATH joysticks

Reali introduces segments such as “Buy or Sell” and “Out of Bounds,” during which the respondents make arguments that Reali either rewards or discounts with points. After the initial three segments, Reali “cuts” a panelist by freezing his/her frame (Reali also “mutes” participants as needed, again reinscribing the consumer’s experience of TV’s flow) and the competition continues between the remaining three. A final “cut” results in the two respondents with the highest scores for the day. The final two continue to the “Showdown”—a rapid-fire, head-cutting duel of various sports/current events topics, in which Reali awards points for creativity and rhetorical moxie.

ATH is a postmodern enactment of modern TV viewership2. Reali controls the show with a series of remote controls and awards points for substantive retorts. Panelists are often pitted against one another in a split-screen formation to display their points. This setup also serves to narrativize the sporting contestation, much in the same way that sporting events are televised and structured around the principles of continuity editing and screen direction. By aligning opponents on opposite sides of the televisual “field,” the commentators simulate the competitive struggles that they are opining. 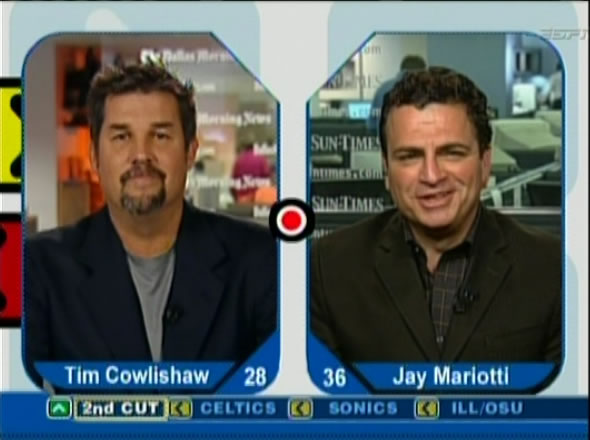 Sportswriters Cowlishaw and Mariotti square off in the final round of ATH.

Both ATH and PTI imitate another “competitive” enactment of what sports consumers (viewers and fans) understand: the dialogue of sports talk. In the world of sports talk (radio, TV and new media), competitive banter involves an encyclopedic knowledge of statistics, schedules, injuries, history, etc., to make a compelling argument about whatever the current topic may be. For example, ATH participants can’t simply discuss Tiger Woods’ latest golfing victory, but rather must outdo one another with a litany of facts and figures to “win” the argument and points. ATH is based upon the subject of various sporting competitions (though heavily favoring the USA’s big three of football, basketball and baseball), and is itself a competition. Daily “winners” of ATH taunt the other participants first with their “prize,” which is “Facetime” — a 30-second freestyle on their topic of choice — and second with their “all-time wins” in a display of competitive records and statistics that mimics the sports they cover as journalists.

Immediately following ATH is a second ESPN “competitive banter” show, Pardon the Interruption. PTI’s namesake is again a postmodern, intertextual address of the interruptive nature of television and the two hosts, The Washington Post’s Tony Kornheiser and Michael Wilbon, carry out this edict by constantly interjecting into each other’s arguments. Interestingly, ATH host Reali is relegated to “stat boy” on PTI. Reali’s function on PTI is (again) to moderate a competitive segment of PTI called “Odds Makers.” In this segment, the hosts give their percentage chances to the relative likelihood of some upcoming sporting endeavor (“100% that Ricky Williams will fail another drug test!”).

This segment is also structurally related to the commonly understood “betting lines” or the “point spread”–betting options available to gamblers–of many major sporting events. Reali’s role as “stat boy” again reinscribes the event of television in the show’s penultimate segment “Errors/Corrections.” Usually, introduced by the hosts as, “now it’s time to find out where we messed up,” Reali proceeds to “correct” any erroneous assertions (inaccurate records, statistics, etc.) made the hosts throughout the show’s rapid-fire tete-a-tete.

Both ATH and PTI visually and narratively try to emulate the sporting endeavors they observe and report upon. The programs often seem very similar to game shows and are in fact structured in similar fashion to something akin to Survivor. The significance lies in ESPN’s strategy to create competition between its commentators. Other commentary/news programming on ESPN function as talk shows or panel discussions–Outside the Lines or The Sports Reporters–but the other shows do not assign point values nor do their participants gloat as “winners” and protest as “losers.”

Perhaps in ESPN’s ever-converging and expanding media empire, the creation of programming that mimics the niche content (sports) of the network is merely another enactment of synergy and convergence. As aforementioned, a consumer of ESPN’s daily agenda/packages can determine what “points” will be bandied about during the course of a news day by observing the initial packages of morning programming such as Sportscenter or Cold Pizza/First Take. These programs are much more along the standard news package or commentary programs, whereas ATH and PTI are something innovative. Perhaps ESPN’s producers realize that their programming niche is competition and by creating competitive programs that ape sporting contests, ESPN is simply creating more of what their audience knows and wants: winners and losers.