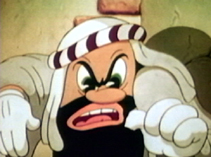 Cartoon of an Arabic man

In the last few years, I have attended and participated in conferences, workshops, sessions, lectures, and seminars from Austin, Texas to Sydney, Australia dealing with the issue of representation of Arabs, Muslims and Middle Easterners in the US and Western media. Cultural studies theorists, historians, political scientists, visual anthropologists, psychologists and specialists from other disciplines have all delved into this matter, most reaching the same conclusions and offering resolute remedies which prescribe an overhaul of the representational terrain. However, while academics have been embroiled in these discussions for years, little seems to change in the way these media address and redress these recommendations. Most mainstream media reactions to this are minor and insignificant. With little prospect for media development, Arab audiences are forced to engage these institutions directly. In a series of columns entitled 1001 Arabian Plights, I hope to draw attention to a growing phenomena online in which Arab publics are utilizing media and communication technology to develop narratives of self and collective identity as a reaction to the media practices in their societies. In this first essay, and prior to delving into this media content, it is necessary to situate and problematize the mainstream media rituals that precipitated such contrarian expressions.

“Malicious generalizations about Islam have become the last acceptable form of denigration of foreign culture in the West; what is said about the Muslim mind, or character, or religion, or culture as a whole cannot now be said in mainstream discussion about Africans, Jews, other Orientals, or Asians.”
Edward Said,
from Covering Islam (1997)

Said’s words were published in the period preceding the events of September 11, a time of seeming tranquility and an era which many assume was free from Arab and Muslim vilification. Unfortunately this couldn’t be farther from the truth as documented by a numbingly repetitive discourse of demonization of Arabs and Muslims which traversed all media content from blockbuster Hollywood films to news and television programming. It would be challenging to uncover any more than a handful of positive depictions of either an Arab or a Muslim in the hundreds US films produced in the last six decades. For comprehensive treatise on this phenomenon, one need only resort to the encyclopedic work of Jack Shaheen in The TV Arab and Reel Bad Arabs (which became the title of a film on the topic, Trailer) and most recently Lina Khatib’s Filming the Modern Middle East: Politics in the Cinemas of Hollywood and the Arab World. A short film by Jackie Salloum entitled Planet of the Arabs expresses this in an aesthetically startling fashion. Edited out of spliced footage from Hollywood films representing Arabs, it dizzingly and silently narrates a long history of manufactured images of a people whose lives and culture were made worthy of disdain. 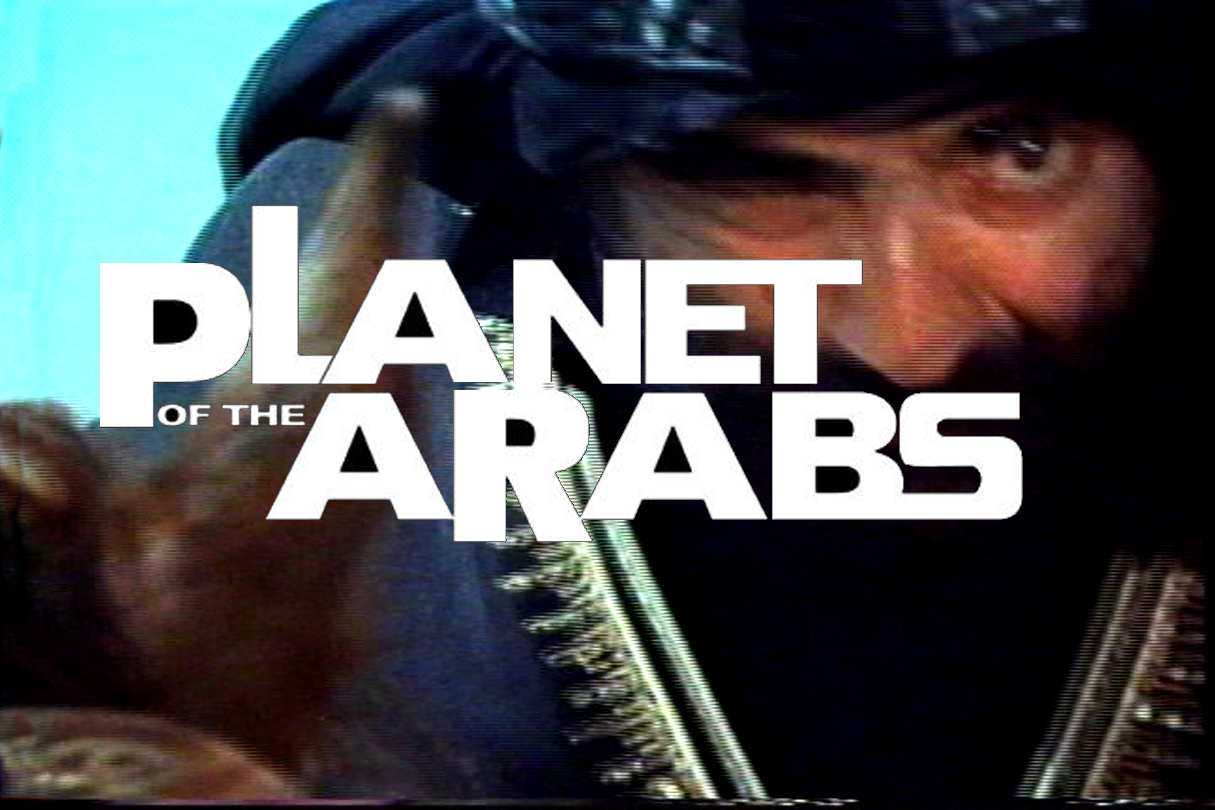 Planet of the Arabs

While discriminatory imagery and racialized stereotypical representations are endemic problems to which cultural studies have been highly critical, the last two decades have witnessed dramatic changes in the language of misrepresentation as characteristically stereotypical debates about minorities that have taken on more covert forms of essentialization. Instances where pejorative and derogatory terms are used to describe racial and ethnic minorities in the US are met with public outrage, a litany of apologetics, accusations of racism, threats of litigation, and other consequences which render such utterances unacceptable. However, Arabs and Muslims have not witnessed such a renaissance. Commentary in the popular media that would meet the conditions of hate speech if attributed to African Americans, Jews, Latinos, women, and GLBTQ often pass for genuine criticism towards Arabs and Muslims. Perhaps the exceptionalism of admonishment for “Orientals” in today’s American media is supported by a discourse that officially sanctions it, lending it both credibility and immunity from being perceived as morally reprehensible by mainstream standards.

Much of these conditions were exacerbated in the post 9/11 milieu which has thrust the Arab world and its peoples into the limelight of the collective imaginary. Governed by a deeply normative conditionality that forces Arabs and their nation-states into categories of good vs. bad, most American media have found themselves in the inexcusable position of regurgitating some of the most implicitly unacceptable and sometimes explicitly racist intonations about the region, the 22 nations that comprise it, its hundred of millions of inhabitants, and the sizable Arab diasporic community which spans the globe.

This year is the 30th anniversary of the publication of Edward W. Said’s seminal book Orientalism, which helped fracture the cast of immunity surrounding western scholarship on the region, shifted pedagogy on the Arab world, and became a foundational bedrock for post-colonial studies. By meticulously disentangling and demystifying the discursive processes that the colonial enterprises in the Arab world used to build a mutated and exoticized image of the region and its inhabitants, Said was showing the historical continuity that characterized Orientalism. In essence, his arguments rang true for cultural studies scholars who perceived the most diabolical attributes associated with Arabs, their history, culture and social mores as remnants of a colonial lexicon about an ‘othered’ Orient.

One such deprecating technique is by collapsing categories of identification so as to simplify, essentialize and explain the behavior of the other. We see this in the frequent confounding of terms such as Muslim and Arab and their interchangeable usage in modern vernacular circles as well as on American news television. This also makes the attack against both Arab and Muslim subjectivity a single endeavor. Examples of this and other defamatory strategies abound. Just six months ago, FOX News Channel (FNC) carried a story about an Arabic language public school in New York City which lost its principal as a result of accusations of serving as a bastion of terrorism. In this clip, one can see anchor Sean Hannity taking sides against NYC Arabic public school, describing it with the pejoratively-connotated term madrasa, describing the school board as a fatwa-funding agency, making clear evocations connecting the 9/11 attacks to the school, and dismissing every cogent argument from the oppositional speaker. FNC continues to pursue the story and confront a NY Councilman John Liu who defends the school’s premise and pointedly suggests Hannity’s case is preposterous.

The punditry of American news has also provided vocal anti-Arab sentiment a pedestal on which belittling and racist expressions amounting to hate speech can pass for free-wheeling First Amendment-sanctioned public expression. In one such example, the host of MSNBC’s Hardball Chris Matthews entertains firebrand conservative commentator Ann Coulter’s case for military attack on Muslim society. Such discourse has subliminally infiltrated all forms of public expression including political campaigning in which candidates for the 2008 Presidential nomination compete over whom is farther removed from Islam and Arabs. In a recent public campaign to undermine Presidential hopeful for the Democratic Party Barack Obama, a rumor simply had to state that he is a Muslim. This was described by his managers as a “false accusation” orchestrated as a “smear campaign.” Obama dutifully and fully denied any association with Islam and solemnly declared himself a Christian whenever the question was posed. Not once did he respond that his religion should be of no consequence or that being a Muslim is not an “accusation.” So deeply entrenched is the animosity to all things Muslim in America, that to make amends with public and media alarm, Obama had to distance himself entirely from the faith and all its adherents.

This distance which has become a massive gulf in the public psyche between what it means to be Western and American versus Arab and Muslim has precipitated what I believe are novel forms of “mediated dissidence.” While there is only sparse documentation of the media content produced by Arab individuals and communities to influence, combat, respond and transform egregious misrepresentation and disinformation as well as subvert authority, these media both elaborate in their critique of mainstream media and ubiquitous in online fora. In the forthcoming columns, I will explore the realm of YouTube music and alternative news video clips generated with the intent of interrogating mainstream images of Arabs, video game technology and dissidence, and the influential role of blogging in transforming the terrain of news on Arabs. 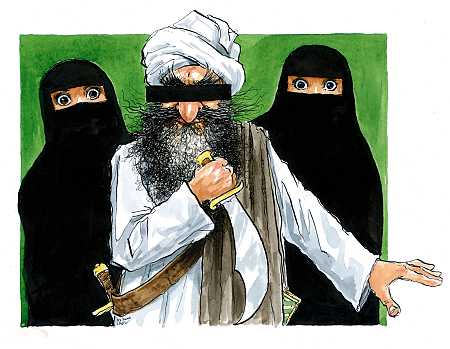 Khatib, L. (2006). Filming the Modern Middle East: Politics in the Cinemas of Hollywood and the Arab World. London: I.B. Tauris.

1. Cartoon of an Arabic man

2. Planet of the Arabs