Online Fun Comes with a Cost

At the top of the list of the hottest products for kids this Christmas are these cute and cuddly creatures. However, they are more than just stuffed animals. The Webkinz collection includes 58 different animals that include a “secret code” that allow owners to enter the online Webkinz World and play with the digital version of their toy.

The toys and the Webkinz site have been growing in popularity since their introduction two years ago, much to the consternation of some parents, who are unable to find the supposedly scarce products, as well as to some observers. One of the sites that tracks the hottest products recently concluded that “Webkinz are the most annoying trend since Beanie Babies, which were the most annoying trend since Cabbage Patch Kids. They also are among the most cleverly marketed products ever.” (“Hottest Products…”) 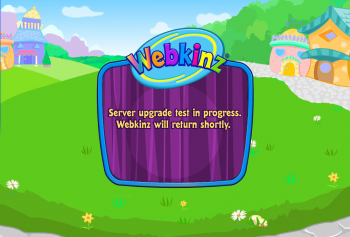 The stuffed animals and the site were created by Ganz, a privately-held family company with headquarters in Toronto, Canada. In discussing why they created what they call “An Online Playground for the Young at Heart,” the company explains:

Where are young people spending their entertainment time? More and more, kids are going to the Internet. Why? It’s interactive. Instead of passively watching television, the Internet gives kids choice. They can play games, chat with friends and express themselves. They decide how to have fun. (http://www.ganz.com/corporate/media/press_release/StoryOfWebkinz.pdf)

Webkinz is only one of many on-line virtual worlds developed over the last few years to attract kids to the Internet. One of the most popular sites of this type is Neopets, which doesn’t require buying a “real” product. However, one might argue that there are other costs involved. It might be useful to look at the Neopets site first, then contrast it with the Webkinz site, and finally, offer some comments about this phenomenon. 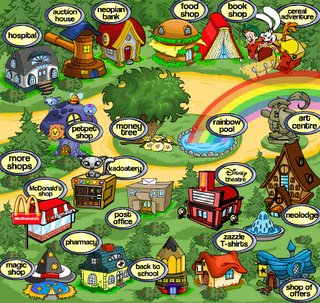 Neopets.com is a “virtual pet site” that can be described as a combination of Tamagotchi (the virtual pet craze of the mid-’90s), The Sims, and Pokeman, with a little bit of Disney thrown in. (See Grimes and Shade, 2005 for a more detailed analysis of the site.) Members adopt up to four pets from a wide array of unique animal species.

The pets must then be fed and entertained. Although this sounds simple enough, the site is quite complex and includes a wide range of activities. It is a “free site” supported by advertising – lots of advertising, which is also integrated into the site.

Neopia includes 10 different lands that offer stores and shops where one can buy virtual food and other items using Neopoints. Neopia has its own post office, newspaper, hotel, concert hall, and restaurants.

There are over 160 different games revolving around competitive battles, puzzles, luck/chance or action activities. Other interactive features include members’ art work, poetry, coloring pages, etc. The site boasts that “Neopet members are not merely passive visitors….”

Neopets membership continues to climb, with the site claiming over 150 million individual members. Neopets is claimed to be “the stickiest site in the world.” According to one source, members spend an average of 6 hours 15 minutes per month at the site. Neopets includes sites translated into several different languages, as well.

The Neopets company claims to have pioneered the idea of “immersive advertising,” which involves a product integrated into existing or customized activities and scenarios within the site. Not all games involve advertising, but a significant number do. For instance, McDonalds, Disney and General Mills sponsor a number of on-going activities, while other games appear periodically that are connected to current films or television programs, or other sponsors. The Neopets site developed rather quickly as the base for an entertainment franchise with a wide variety of merchandise available including hand-held games, mobile phones, trading cards, and video games.

The Neopets site is not just about adopting and caring for a pet – it easily can be interpreted as a training ground or “grooming” for capitalist or consumer culture. There is a bank and stock market, plus lots and lots of shops. Overall, there is an overt emphasis on materialism and consumption, as players are encouraged to acquire (buy) items and sell them for Neopoints. A huge number of “neoitems” are available, and when pets do not “own” anything, they are portrayed as desperately sad and dejected (often crying), encouraging their owners to purchase something. To participate in many of the activities on the site, one must pay Neopoints and sometimes real cash (for special clothing for your pets). Numerous offers also are made for earning Neopoints by filling out surveys for Neopets, as well as for other companies. It may not be surprising that the Neopets company has become a source for market researchers, producing an annual youth survey used by numerous companies and marketing publications.

The website was created in November 1999 and organized as a privately held corporation in April 2000. In June 2005, Viacom purchased Neopets for $160 million. The site works well within the wide range of media controlled by Viacom, including Nickelodeon and MTV. Viacom also bought the popular websites, iFilm.com and gametrailers.com. Of course, Viacom is not the only company making moves into Internet territory.

The Webkinz site is not quite as complex as Neopets, but also includes its own currency, commodities for sale, and a wide variety of games. However, overall, Webkinz is considerably more “parent-friendly” than similar sites. In Webkinz World, healthy food is cheaper, exercise is encouraged, and educational games are promoted. Interaction with other members is strictly limited and special activities are organized only during after-school hours.

The site doesn’t include advertising, however, there are promotional announcements for either on-site activities or Webkinz Cares announcements like:

* Fruit is good! Fuel your body!
* Drink Milk! Help Your Bones!
* Explore the Outdoors! Take a Break! Spend some time outside!

There also is constant encouragement to buy additional pets, plus promotions for other Webkinz products, such as trading cards and charms, bookmarks, clothes, purses, knapsacks, and cosmetics.

Webkinz is not owned by a major entertainment conglomerate (yet!), and the Ganz Company seems downright quaint compared to Viacom. But the Webkinz phenomenon has sparked other “hybrid” toys with Web components. Hasbro has developed its own toy/website called Littlest Pet Shop VIP; another line of stuffed animals is called Shining Star. Other virtual sites, such as Club Penguin and Disney’s Toontown, charge a monthly fee; meanwhile, the new Barbie Girls site requires a $75 bundle. 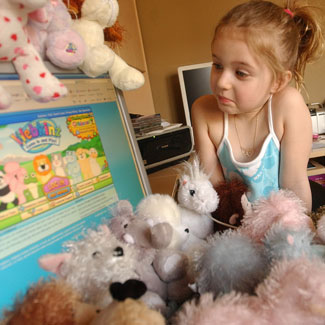 It might be argued that these sites contribute to the commercialization of childhood and youth. Indeed, the process of targeting youth for consumption through media and advertising has become increasingly more developed and sophisticated, as documented by many scholars and some policy people. It seems obvious that these new websites have become a part of that process.

Even before Neopets and other sites were created, child development specialist, David Elkind, poignantly observed that “Children’s play – their inborn disposition for curiosity, imagination and fantasy – is being silenced in the high-tech, commercialized world we have created.” (Elkind, 1982)

While this development may not be surprising to many, maybe that is the point. The popularity of Neopets, Webkinz, and many other sites aimed at kids feed into the naturalizaton of the commodification and commercialization processes that are at the core of advanced capitalism. And, again, another new technology has been harnessed for commercial purposes, as well as promoting and teaching consumption to young people.

1. Elkind, David (1982) The Hurried Child: Growing Up Too Fast Too Soon. Addison-Wesley.