I Never Promised You A Rose: Exposing the Unreality of the Dating-Reality Program

The formula for ABC’s reality program The Bachelor is quite simple: take one handsome, single, eligible, thirty-something white man. Introduce him to twenty five eligible, mostly white, twenty-something women. Winnow the number of women down week after week via a “rose ceremony,” whereby the bachelor distributes roses to the women who remain in contention to be his mate. Conclude the season with the bachelor “painfully struggling” to decide between the two remaining women.

The final episode of each season consists of a number of predictable rituals: the women meet the man’s family; the man encourages the women to “open up” and tell him how they really feel (though the show’s rules prevent him from doing the same); the man selects a ridiculously huge diamond engagement ring. This all leads up to the man meeting with the two women individually on a beautiful scenic set–sunset optional. At this point, he sends one woman “home.” He then proceeds to confess his love and devotion to the other. Often this is followed by a proposal of marriage. Fade out with the happy couple declaring to the camera–and host Chris Harrison–of their profound feelings for each other and their hope of living happily ever after. Covers of People, US Weekly and In Touch follow, as do interviews on Good Morning America and Live with Regis & Kelly. 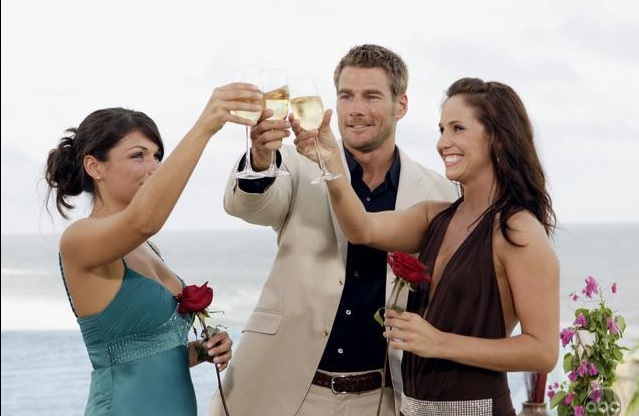 The Bachelor and his “ladies” in happier times.

For ten seasons, The Bachelor rigidly adhered to this formula.1 Though structured as a dating competition, viewers were repeatedly told by the participants and the host that what was at stake was nothing less than true love. Women with ulterior motives–such as acting or modeling careers–seemed certain to be found out by the discerning bachelor and eliminated before season’s end. Fairy tale imagery dominated throughout the series. The man always took at least one woman out on a “dream date” where he provided her with a million dollars in (loaned) jewels and a fancy designer dress. In addition, each season, the final four women were offered “one-on-one” time in a “fantasy suite.” As the women proceeded to retreat with the man to the suite–as they almost always did–the show had to straddle a delicate line. There was typically the implication that, one by one, the bachelor consummated his love with all of the women. However, such acts were only implied, never confirmed. To explicitly depict his bedding of multiple bachelorettes would destroy the show’s already tenuous mythology involving an honorable man’s chaste search for the one and only Right Woman For Him.

A happy ending to each season was guaranteed and expected. That is…until the most recent season finale, when in the last scene, bachelor Brad unexpectedly deviated from the script. After sending the first woman home, he proceeded to meet with the second. But rather than proposing – something the show’s structure suggested he was ready to do – he did the unthinkable: he sent her packing. That’s right…the bachelor chose to remain a bachelor. Rather than concluding the show with a shot of a happy couple, the camera pulled back to reveal him sitting alone. The final shot? A lone rose, never to be offered to a fair maiden. 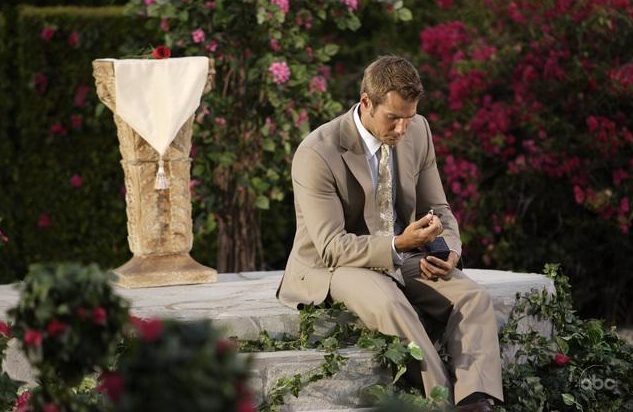 After the long goodbye.

What was stunning to see in the days following the broadcast was the fury and bemusement this simple act fueled in newspaper articles, blogs, and message boards. While Brad’s decision generated the expected debates about his personal motivations and the womens’ feelings, his actions also stimulated a number of broader discussions about reality television’s conventions, television industry practices, and American culture. The kinds of questions that circulated online in the hours after the show aired included: how could ABC broadcast such a program – especially once they knew what the results were? Could the show ever recover from some such a development? How could the network so blatantly mislead viewers via its advertisements and promotional materials? Wasn’t he required to choose someone?2

A number of viewers expressed anger and frustration at the bachelor’s refusal to “play by the rules.” A consistent theme was that they watched this reality show for its unreality; for its promise of a romantic heterosexual coupling. While a break-up was likely to occur, that would happen under the radar, after the next season had begun. Many individuals noted that show’s structure encouraged certain expectations which, when unmet, led to two dominant responses: either dissatisfaction with the show’s unanticipated and undesired degree of reality, or glee that the fantasy bubble had been burst so violently. Amusingly, the snarkiest of bloggers wondered whether Brad’s inability to act was one of the first visible consequences of the writers’ strike.

On the most basic level, the bachelor’s unwillingness to choose a mate underscored the illusory aspects of the dating-reality show format. It undermined the artificiality of the show and highlighted the program’s conservative gender politics. However, the show’s contrived nature might have been brought even more to the fore if the show had retained its original ending. 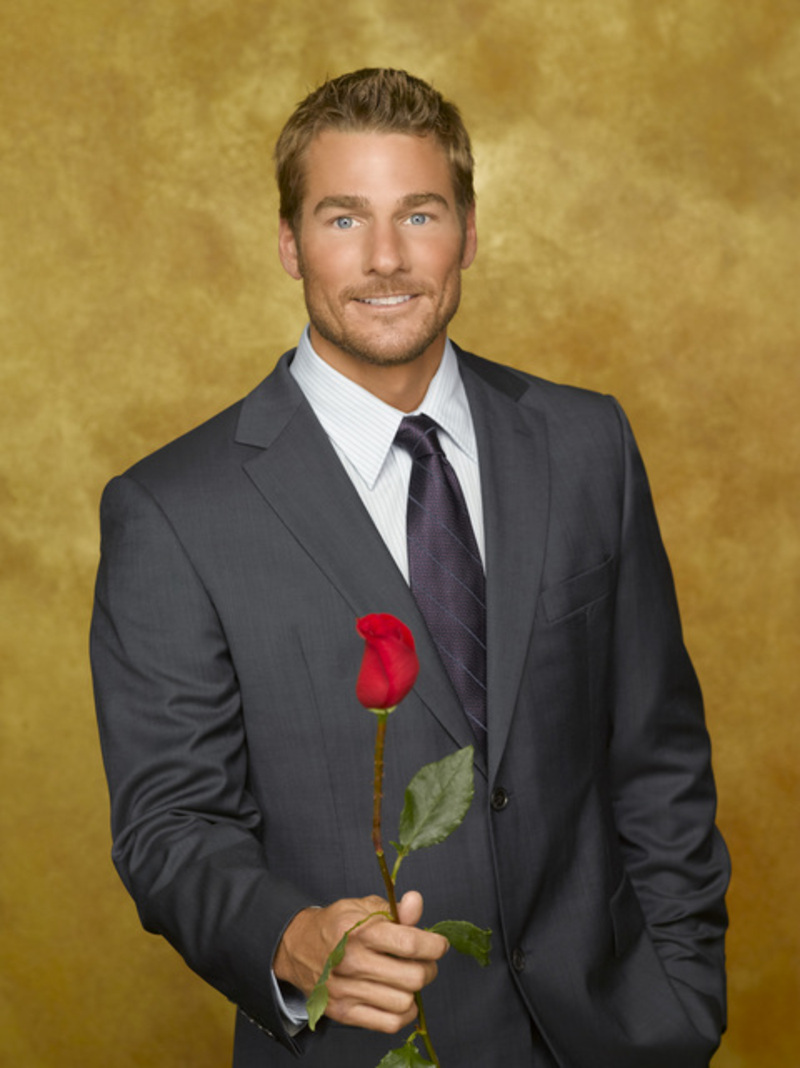 I think I’ll just hold on to this.

As per The Bachelor’s creator, Mike Fleiss:

The original ending, before the network made me change it, was after the girls were crying we fade down and come back up to a shot of Brad sitting on the couch, remote control in hand, clicking on the game, munching on a submarine sandwich. That’s what I wanted at the end. But the network said no.3

ABC may have objected to such an ideologically charged ending but–unsurprisingly–the network had no qualms about exploiting Brad’s decision for maximum ratings value. Whether to avoid viewer revolt or exploit the buzz surrounding the season finale, the network aired a follow-up episode, “After the Final Rose,” the very next night. In a blatant attempt to present Brad’s act as an aberration, a disruption to the show’s ability to create wholesome white, middle-class American families, the host began and ended the program by parading the two success stories from prior seasons in front of the camera. First came Ryan and Trista, along with their newborn child; this was followed by Mary and Byron. (The Bachelor’s matchmaking abilities were not helped when, just a few days after the most recent show aired, former contestant Mary was arrested for allegedly punching Byron while under the influence of alcohol.)4 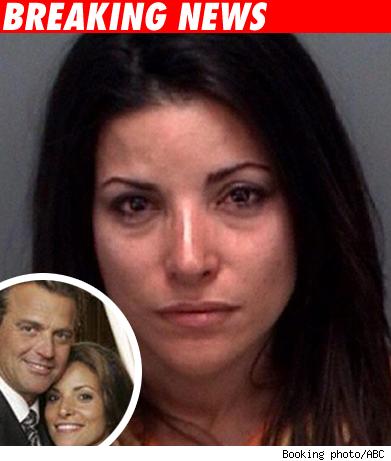 The bloom is off the rose in yet another Bachelor relationship.

The presence of these couples was meant to assuage viewers discomfited by Brad’s decision. However, the excess of emotion presented during the rest of the program created a sense of dissonance. In what may have constituted one of the premier examples of train wreck television, the host, the final two women, and a studio audience “confronted” Brad about his decision. The recurring theme over the course of the episode–as well as online–was that the show was supposed to produce pleasure: not only for the couple at the end of the season, but also for the viewers. Yet instead, all that was experienced on this go-round was pain. The host declared as much when he wrapped up the show by telling Brad that “Six years of doing this, that was the most uncomfortable, toughest thing I’ve ever sat through…”5

Notably, more viewers tuned in to witness this hour of awkwardness than any other program on television airing at that time. In fact, it is likely that the publicity surrounding the finale contributed to huge ratings for the next night: whereas 11.4 million watched Monday’s episode, 12.8 million viewed the subsequent “After the Final Rose” episode.6

In an age when such kitschy and self-aware programs as Rock of Love, A Shot at Love with Tila Tequila and Scott Baio is 45…and Single dot the television landscape, The Bachelor seems ever-more farcical and anachronistic (if not downright offensive). The question remains as to whether this will be the last hurrah for a show that has revealed its ugly seams. Only time will tell if the romance between The Bachelor and its viewers–or, at least, ABC–will continue.

Image Credits:
1. The Bachelor and his “ladies” in happier times.
2. After the long goodbye.
3. I think I’ll just hold on to this.
4. The bloom is off the rose in yet another Bachelor relationship.