Missing in Time: Madeleine McCann and the Media

One of the “Missing Madeleine” Graphics

For the last six months there has been only one news story in the UK. On May 3rd 2007 at approximately 10pm, Madeleine McCann, a three-year old British girl, was found to be missing from her parents’ holiday apartment in the Portuguese resort of Praia da Luz. Most media summaries and reports of Madeleine’s disappearance agree that this is the only ‘fact’ to be known about the case. I too want to begin here, starting with the awkwardness of that phrase ‘was found to be missing’. Why not say, she ‘went missing?’ or, that (as I write) Madeleine is ‘still’ missing and is ‘missed’ (one tribute to Madeleine on YouTube suggests ungrammatically ‘She is missing by everyone’). The answer is, of course, that Madeleine was not there when her mother, Kate McCann went to check on her and her younger twin siblings. She had, apparently, been there thirty minutes before when a close friend of the family went to check the apartment. That pucker of time, the period in which she went missing or before ‘she was missed’ remains unknown. What is well known is that Madeleine’s absence has gone on to create a worm-hole of media speculation that has sucked a range of high profile figures (the Pope, J.K. Rowling, Richard Branson, Gordon Brown and David Beckham amongst many more) into a stream of frenzied speculation and emotive judgment that has gone on and on and on, on tabloid front pages, in broadsheet columns, sick jokes, blogs, in YouTube videos and on the official ‘find Madeleine’ website which offers a blog from Madeleine’s father Gerry, numbers of phone lines where sightings of Madeleine can be reported, a news archive and a link to ‘Madeleine’s fund: leaving no stone unturned’ to which you can contribute via PayPal.

Many of the stories surrounding Madeleine McCann are marked by a peculiar obsession with time and time keeping. As I write, the website informs me that Madeleine has been missing for 194 days. Last weekend it was the ‘landmark’ of six months since the day of her disappearance. In a recent Channel 4 documentary on the McCann case, shown in the Dispatches strand, the final frames of the film and voice-over present an eerie challenge, stating that, ‘It is now 168 days almost to the minute since Kate McCann reported that her daughter Madeleine was missing.’ Despite the fact that the documentary was not a live report, its scheduling, on Thursday 18th October at 9.00pm (and therefore concluding at approximately 10pm) allows the producer to assume a ‘live’ connection between ‘now’ and ‘then’, changing the nature of the story itself which was (a relatively cool and measured) speculation on ‘what might have happened’ so that it is no longer in the past tense but now in the present (‘almost to the minute’). 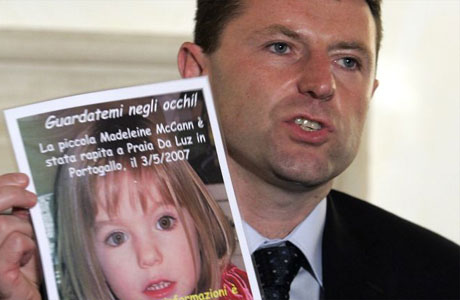 Equally, in news archives and in her Wikipedia entry we are offered the ‘timeline’ of the Madeleine story. Periodically, ‘new’ photographs are released of Madeleine; they are, of course, only old photographs. On Sunday 11th November, the British tabloid the Daily Star had a front-page splash, ‘Is this Maddie?’ with the additional heading that ‘Bosnia sighting gives new hope’ implying that the photograph which accompanied the headline was a new picture. In fact, it was a fairly crude photo-shop image (‘created by experts’) illustrating how the ‘missing four year old may now look’. Here, as elsewhere, a future is being forced, the story ‘must go on’ although there is no real authenticity about the picture, since it cannot be of Madeleine ‘now’, only of how she ‘might’ be. Equally, in describing the picture, the Star promulgates a common act of faith in terms of Madeleine’s story. Madeleine was three years old on May 3rd and her birthday is May 12th: thus, if Madeleine is still alive, she is now four, if not, she will always be three. Attributing the simple ‘fact’ of Madeleine’s age thus elicits a statement of belief on the part of the storyteller.Why this obsession with marking time, with keeping time and with time passing? There are two reasons (at least). Firstly, the parents have made it clear that they believe Madeleine may still be found, so they keep her presence ‘alive’, her story current (now and not ‘then’) and they continue to feed interest in and speculation regarding Madeleine through their attendance at religious services, interviews and on their website. Similarly, traditional news media (newspapers and television news) talk media (blogs, forums, radio discussions, magazine programmes) are now committed to, and increasingly determined by the need for the ‘now’ and the ‘and next’ of any story, participating in the snow-balling of information, where even looking back is always an excuse to look forward.

Secondly, the stories of Madeleine have carried on and on because they centre on a little girl, a child. Fascination with the story is not simply – as so many commentators have suggested – because she (and her mother) are blonde and photogenic, that the case is so extraordinary, or that it allows, as India Knight writing in The Times suggested (employing Philip Roth’s phrase regarding the Clinton/Lewinsky scandal) for an ‘ecstasy of sanctimony’ for both the press and the ‘public’. While this may be true, the fetishization of time in relation to Madeleine has to do with the way in which ‘childhood’ as a time, a place, a memory and as a fabricated ideal has been established as a myth that belongs, or should belong to ‘everyone’. Madeleine as a child, rather than as herself, an individual, acts as a timely representation, a figure, that can be passed through, a route to specific emotions (nostalgia, sentimentality, fear), judgment (about parenting, police procedures, how much doctors are paid) which we all feel free to comment on – not because we are experts in forensics, in law or child-care, but because we are parents, or at least, we were all children once. This claim may seem ridiculous, but in the most recent keynote speeches given by both leaders of the UK’s political parties – Labour and Conservative – there was an insistence on the uniqueness of childhood as a necessarily privileged time that was to be protected and supported, identifying it as an origin of all that might be good and bad in society.

Curiously, despite the fact that we have made childhood and children ‘other’ to the adult, it has become a territory that we can all lay claim to, and which has become the most ‘important’ period in our lives. Madeleine herself (that ‘Princess’, that ‘lovely little girl’) does not exist as a subject; her history is an incomplete, incoherent chronology of snapshots and clichés. When we look into the poster showing a close up of Madeleine’s eyes (the right eye famously marked by what appears to be a tear from her iris) we do as the poster asks (Look into my eyes!) but we no longer see her at all. Madeleine is missing.