The Good, The Bad, and the Best

Most people I know who work in or study television have an ever-changing favorite program that falls into what I categorize as good/bad television. What I mean by that is there is always at least one show each season that is truly terrible programming, but you just can’t help watching it. Much like stopping for a car wreck on the interstate you just can’t turn your eyes away.

Of course, I grew up watching The Partridge Family so that might have something to do with it. Though like most girls at the time, my crush was on David Cassidy and not Danny Bonaduce. Now, however, Danny is now far more entertaining.
Lately, I’ve found myself fascinated with Dog: The Bounty Hunter. 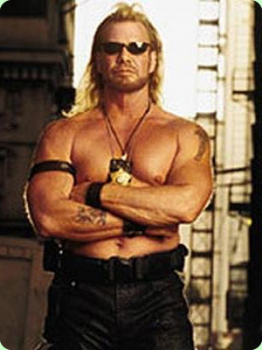 Like all good/bad TV (and no, it doesn’t have to be a reality series), there is a feeling when you watch it that you cannot believe the show is truly on the air. In the case of Dog, 30 seconds of viewing time and you’ll know what I mean.

For those of you who aren’t familiar with the show, Duane “Dog” Chapman is a bounty hunter in Hawaii. He gained international notoriety for his work when he went down to Mexico and brought convicted rapist Andrew Luster, heir to the Max Factor fortune, back to the United States to serve out his prison sentence. Shortly thereafter, A&E provided Dog with his own reality series.

Dog is by any definition a colorful character. He has unruly, long blonde hair. He smokes cigarettes, evidenced in his gravelly voice. He wears black leather (usual a vest with no shirt underneath in order to show off his large muscles and his various tattoos) and has feathers hanging from his ever-present sunglasses reflecting his partial Native American heritage.

Chapman is assisted in his work by a ragtag “posse” comprised mostly of family members. First, there is his wife, Beth, who is an extremely buxom blonde bombshell that no one is going to mess with (Beth has been with Dog for close to 20 years and they have a number of children together, but they only got married this last year which was the third season’s finale). He also regularly rides with Tim Chapman, no relation though he is often talked about as being a brother on the show, and two of his many sons, Duane Lee and Leland. Family is a recurring theme for Dog. For example, he talks of how the Chapman men “make good babies.” This is no small claim for Dog. He has twelve children, most of whom are expected to eventually enter the family business (he’s also had five wives, though this is never discussed). The newest addition to the team is “Baby Lyssa,” Dog’s daughter who just turned 18.

While it was these interesting characters that initially drew me to the show, more recently I have been mesmerized by the religious aspects that permeate the program.

The Mythology of Dog

In my book, Brands of Faith: Marketing religion in a commercial age, I write about the elements necessary to create a distinctive brand whether you are talking about toothpaste or a television show. These three key elements include a readily recognizable logo or personality, a tagline, and the brand mythology. In this case the logo is Dog himself, the tagline is “In Dog We Trust” and the brand mythology is the story of Dog’s life which like his persona is bigger than life.* He is not just a bounty hunter. He is an ex-convict-turned-bounty hunter. Not only is he an ex-con-turned-bounty-hunter, he is an ex-con-turned-bounty-hunter-turned born-again Christian (while we cannot outright call Dog a faith brand – the faith he is selling is Christianity and not himself – we might certainly call him a flanker brand for faith).

The mythology of Dog is, of course, the redemption story – the prodigal son returned home to serve his father after going so terribly astray. This plays out in a couple of ways on the program. First, in almost every episode the posse circles up for a prayer before going out to get the bad guys. These prayers are led by Dog who asks for protection and safety in their work. Second, the formula of the program is for each episode of the show to be a mini- redemption story (the fugitive returning home to “the Father”) with Dog as the catalyst who leads the lost back to the fold. While we never see what ultimately happens to these people, we are led to believe there is at least a glimmer of hope now that they have been in contact with Dog (God?) and his posse.

Dog certainly didn’t create the trend of blending religion and crime. Frank Pembleton on Homicide Life on the Streets was continuously negotiating his faith. On Law &Order: SVU, Detective Stabler talks about his Catholic upbringing. It is also not unusual for a cop show at some point in time to have an episode or two based around a religious conflict. Some recent examples of this include two back-to-back episodes of Cold Case: one was about a virginity club in a high school and the other about an Amish girl who is killed during rumspringer. This series includes an element of spirituality in each of its episodes. Each show ends with the dead coming back to acknowledge the good work of the cold case squad with a nod of the head.

The most dramatic co-mingling of saint and sinner was last season’s Saving Grace on TNT. Grace is an out-of-control detective. She drinks, she smokes, she is an adulterer. At the most inopportune moments, an angel with exceeding large wings appears to show Grace the error of her ways. Grace, of course, is adamant that she does not believe in this apparition yet she continues to bring proof of his existence to her friend in the crime lab. The show’s tension is built around Grace’s continuing fight against good entering her life.

It is not, however, the combining of the deadly and the divine that makes for good/bad TV. Saving Grace, for example, is just bad television. Good television makes you care about the characters, whether it is reality TV or not. What makes Dog and his helpers so fascinating to watch is the dichotomy they create. They look menacing in their black Kevlar vests and mace on their belts, yet they are standing around praying. They are bounty hunters interacting with some of the lowest of lowlifes, but they ultimately treat them with respect and are trying to make their lives better. Just like Breaking Bonaduce was about one person’s fight for redemption, so too is Dog about the fight to be redeemed. Good/bad television doesn’t get any better than this.

*You can view the story of Dog’s life, A Man Called Dog, on the A&E Web site. This was presented in conjunction with the release of his now best-selling book, You Can Run But You Can’t Hide.