YouTube, Dance and Reform: The Body Caught in the Act

If YouTube functions simultaneously as common democratic archive and repertoire, as we have been told vociferously during the 2007 Presidential Debates, is it possible that its mode of production obliterates the “historical record,” at least our memory of it? The large numbers of participants (unevenly distributed among searcher-watchers, stumbler- watchers, subscriber-watchers, maker-watchers, subcriber-watcher- commentators, maker-watcher-commentators) make it possible to reinvent/reinterpret/recycle/retrofit the “past.” YouTube once offered the possibility of just indulgent memory–posting up clips of old movies, late night television, music videos, experimental tinkering with home movies, send-up videos, and mash-ups of favorite music videos–recollections of screenic impulses which flutter across our muscles, marking the way we walk, hold our head, gesture and dance: we are stop action animation of film and video gone by.

Copyright holders, not keen on witnessing their product cycling around without capital returning to them, have used the 1998 Digital Millennium Copyright Act to force providers like YouTube to block the way that we remember ourselves. Currently, with the “broadcast yourself” logo, the advent of the vlog, and subscriptions, YouTube participants traffic in messaging like well-trained PR folks. Amoeba-like, the brisk, compressed video clip extrudes meaning from a simple performative: “someone should see this.” The implications of this operation for our corporeality and its concommitent memorialization of time are vast and unchartered.

I use it all the time in my lectures. How can I not? Really EVERYTHING is on there; at least it used to be before Google bought it out in late 2006. YouTube is the dance scholar’s dream come true. Prior to this ingenious assemblage of Macromedia’s Flash 7 and H.263 codec, dance scholars the world over would fret over format and compatibility of media, and then of platforms and programs once we entered the digital age. With the early 2005 advent of web-based video streaming, dance and dance scholarship are now flourishing, giving us a false sense of fluency in each other’s production.
From moving pieces by national unknowns, to much loved ad campaigns of the past,

YouTube brings dance to consumers in a way that broadcast dance competitions cannot. The range in genre and style is vast; the subject matter, unexpected. And as ticket price or time slot is not an issue, each has the potential to be equivalent in value to the next (if we discount the ads generated by the tags and the fact that most internet service providers charge extra for the bandwidth required to upload/watch steaming video) Short, intense, and provocative, dance bits on YouTube have made my life easier, but they occasionally drive me to stunned silence.

It is not just the riveting choreography, or the dorm party captured by a cell phone camera that harnesses my spectator’s eyes; the work that dance accomplishes on YouTube normalizes the aspect ratio of the frame, invisibilizes playing to/with/for the camera for future streaming. With ubiquitous archiving a common practice, are we already moving as if encased in our looming historical futurepast, framed for compression, awaiting, hoping for millions of eyes to examine our moves? Is our movement always already compulsory and commoditized?

Dance practice revolves around inspiration, dedication and regimentation; the latter often verging on psychological and physical terror. Choreography, writing with dance, can involve self-effacement in order for the resultant “document” to be more “legible.” Not all pieces are generated this way, but the large spectator driven works, especially for broadcast television and Broadway-derivative works function in this mode. The move towards legibility versus open-ended meaning necessitates a documentary mode, a method of conveying exactly the same message each time, regardless of venue, time, and even performing bodies. Curiously, this method evolves at two poles–and maybe more–the training of the performing body a.k.a. technique; and the archiving of the performance, or documentation.

Technique reconfigures the body of the performer for better expressivity/malleability but methods can and often involve an intense amount of pain.

Documentation of dance performances are achieved through either a notational system like Labanotation, or through moving images. Because notational systems require years of study to both learn how to write and read/reconstruct from the “scores,” most choreographers opt for film, video-tape, and now digital formats. Both types of documentation obliterate the performance qua performance, but for numerous reasons ranging from grant-maker’s requirements and the costs of global touring, performers and scholars depend heavily on video versions, often without any attention to representational issues. When posted on YouTube, the violence done to the body of the performer and to memory itself (the first archive of the piece is in the sinews of the performer after all) is quickly hidden by the experience of beauty, of the sublime, of the unexpected, of the reminiscent.

Oddly, music video and home movie footage are always already dance documentation. When they appear on YouTube, it would be more fruitful to think about them, however, as ephemera, in the anthropological sense. That is, it’s not so much the performance (yes, I am slapping myself) as it is the urge to save the performance, to share a memory without having to resort to words; to cut down the indexical challenge of witnessing. Yet this is not a format free from macro-social control. Self-expression through the selection of video clips is policed by the site provider, Google, as well as an array of record labels, movie producers, television executives, intellectual property lawyers and even among users themselves. Therefore, it is possible to exert ownership over the ways in which users “view” themselves, or construct their corpo-digital, video corporeality. This is memorial repression driven by market needs.

A disturbing example of the historicization of the immediate can be found in Ric Silver’s attempt to sue Google for copyright infringement on his dance, the Electric, using the DMCA.

Though he was able to secure a 2004 copyright on a Labanotation of a piece of 1976 choreography that dance ethnographers would say is not the Electric Slide as practiced by people today,

he was countered sued by the Electronic Frontier Foundation in 2007 and lost, but he maintained the ability to say what is the Electric Slide. He now scours YouTube posting comments sending people to read his definition of the Electric Slide on Wikipedia. Through his solipsism and the grey areas of the DMCA, Ric Silver exerts wide-ranging social control over the way in which we celebrate and distribute reproductions of that celebration.

In this nexus, Cebu Provincial Detention and Rehabilitation Center in the Philippines’ performance of Michael Jackson’s standard-setting music video, Thriller, should’ve sent MJ into fits of copyright hysteria. But it did not. Foisted upon the prisoners by “security consultant” Byron Garcia as compulsory exercise, Thriller is arguably the one music video that any avid MTV watcher remembers. It trafficked in genre-crossing production values, illuminating the potential of the music video to stand alone as a work of significance. When the orange-draped bodies of the inmates at Cebu, all 967 of them, began to lurch to that familiar creepy, funky music, globally our jaws dropped. 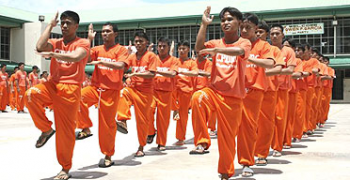 Comments on the video ranged from the celebratory, congratulatory and inspired. It is telling, that few questioned the ethics of compulsory dance performance. Maybe because they only “see” the potential for fun from their own subject position. Again, projections of dance events posted on YouTube reveal more about the member than they do YouTube as an organization–though they are infamous for pulling videos when served DMCA-based take-down notices even when the work rides within “fair use” range. Byron Garcia posted several videos to show regimentation and population control that was result-driven to other security professionals. To get to that level of proficiency, he obviously worked them hard, with a reward dangling at the end of his stick.

Lost is the immediate concern: that these men and women are participating in a poorly defined area of social control. They are YouTube stars now. Our eyes are burning. It makes it hard to see.