Talent: No Alarms and No Surprises, Please.

At the precise moment democritizing media (such as blogs, YouTube, and cyberliving) are on the rise both, television and music industries are making dramatic investments in “the people” in the form of the talent show. On the surface this looks like the most old-fashioned and wholesome of gestures, rather as if these industries were rediscovering their raison d’etre in serving the public with something “pure” – the people themselves. But beneath this benevolent sheen is a concentrated effort to showcase what big business does best – dazzle – as well as extracting the maximum profit from audiences while they still have a tangible hold on them. Significantly they define talent for our age.

In the notoriously unpredictable world of show-business the televised talent show makes economic sense. Over 10 weeks or so the talent (defined at first as low-cost units who don’t need to be paid) gets a full airing before being dismissed by the viewers. Hours of television are produced at minimal expense by recording and transmitting not just the auditions but also the humble dwellings of the hopeful. This also looks democratic because it illustrates how the multiplication of channels seems to increase opportunities to see (and be seen by) all. By the time of the series finale, a great deal has been invested in the talent who have been transformed from person to commodity by the joint operations of a watching (and paying) public and the wary guard of the industry itself. People such as music mogul Simon Cowell have a direct involvement in several talent shows because they are a sure-fire means for him to become rich. His demeaning remarks win a sneaking regard because he is after all, from the industry. While loud and aggressive complaint with the judges is part of the fun, all agree that the market is king. In UK versions of talent shows the market and the people have become synonymous. Indeed, the market is invoked with the due solemnity of a Calvinist referencing God. Any manner of brutality can be excused in the name of the market/the people. The supreme talent then is one sanctioned by the market. 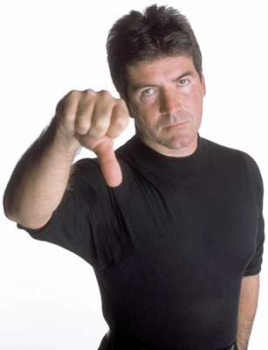 Programmes like X-Factor and America’s Got Talent turn us into consumer-viewers now more than ever before. We sustain such television not merely by being delivered to advertisers through ratings, but also by the phone or text vote (10.4 million people called in the UK X-Factor in December 2006) The democritisation of media – “You Decide” – has made it our fault if they fall from grace (or the top of the charts). After all we’re not being manipulated if we chose to put them there in the first place are we? Talent is now a perfect response to a market-driven democracy.

The place of talent shows in the television schedule helps to position the product for the wider market. This helps creates a shape or loose system for those manning the celebrity scaffold – from junior stylists to showbiz editors. Talent is brought into the entertainment machine by these programmes with such regularity that it’s a bit like wearing a sell-by sticker. More than ever this is a business with a product and those involved need to decide whether to make a strategic investment in this bright flickering talent before moving onto the next perm, plug, or podcast. This question of infrastructure should not be overlooked. More than ever we have a roughly synchronous system working to maximise profit from talent however small and puny it might be. The market is now flooded with publications, websites and mini-programmes helping us to discover the foibles of the stars and wannabees of the talent show. When wrinkles can be captured by a lens hundreds of meters away then its important to have your people looking after you. It is this infrastructure that can maintain a career. Thus it follows that talent can also be defined as sustainability in the marketplace. 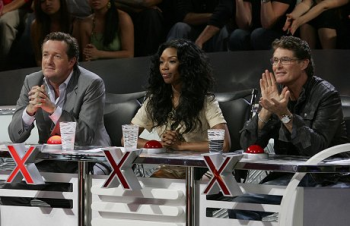 Judges for America’s Got Talent

But one factor that seems to make this recent incarnation of the talent show significantly different is that it seems shrouded in fear and hysteria. No where is this fear of change more apparent than in those who sing. The objective behind every choice of song is to select something that will demonstrate the singer’s range but, more importantly, connect with the public/the market. Needless to say this is also a reinvestment in the past, a nostalgic refusal to let go the classics (also owned by the record companies). In this way talent is defined as conformity, supplication, an emptying out of the self to please the public. Those pursuing this career path are not seen as artists but as shrewd players maximising their talent. The warming contours of an old song already half escaping the sighs of an audience is a surer root to profit than the potentially troubling new. The manic reception afforded old songs suggests that we do not want to be reminded of the present. We want nostalgia now. In a risk-laden society we need comfort – no alarms and no surprises. What the song becomes now is something the audience remembers and the singer re-interprets. In this moment the memory of one is treasured and re-projected by the other as valuable, worthy indeed of the golden hour that was Saturday Night when the ideal family grouped around the television. Advertising helped shape this slot which soon became the most important in the schedule. But as the schedule disappears, homes use multiple sets and the nuclear family crumbles the ideological mechanism of Saturday night is lost. In its place are hysterical relatives screaming and waving banners and shouting themselves hoarse for their own families. The triumph of such television is to defuse the threat of talent and make it fit utterly commercial choices which we in turn, are proud of our role in. What’s left to be special is “dazzle” and our “new and improved” role in it.

So what is talent now? A starry rope-ladder to the celebrity scaffold? Or a gift?