Call me crazy, but what I think this country needs is a little class warfare.

While Americans are working more hours than ever, wages for the bottom 40 percent of Americans have stagnated in the last 30 years.[1] Meanwhile, the rich get richer, and even the middle class has lost ground. Between 1979 and 2003, for instance, while the income of the middle fifth of American households increased slightly in inflation-adjusted dollars from $38,900 to $44,800, the average income of the top one percent of households more than doubled, from $305,800 to $701,500.[2]

It’s a sobering picture. Still, these numbers do little to document the struggles that working families face in everyday life—including the feelings of desperation as productivity demands and working hours continually increase,[3] as wages stagnate and collective benefits recede, and as flexible work schedules become a privilege reserved for the affluent and the tenured.[4]

Perhaps not surprisingly, commercial television dramas in the USA have largely ignored the accelerating pace of class exploitation—most likely for reasons that are familiar to everyone. Advertisers want a good environment for promotional messages and brand integration, not to mention an audience packed with young, affluent viewers. Programs that frankly explore class issues seem unlikely to yield either of these conditions and thus die a silent death in the Hollywood pitch-room.

But yet, as I noted in my last column on Everybody Hates Chris, sometimes even American commercial television can surprise you. And sometimes, on magical occasions, a show can give you a powerful, if refracted and distorted, glimpse into a classless socialist utopia.

This brings us to the second season of ABC’s Lost. Like many Flow readers, I’m a fan of the show. The central conceit of Lost, as most of you probably know, is that forty-odd survivors of a plane crash find themselves marooned on a tropical island, cut off from civilization, and then menaced by a band of “others” whose origins and ultimate plans for the castaways remain a central mystery in the story.

Of all the show’s intriguing characters, I like Hurley (Hugo) Raez the best. Hurley—an overweight, heart-of-gold, SoCal guy—mostly offers comic relief in this dead-serious show, and for this reason, he’s not often the focus of the narrative. But when he is, it’s usually quite engaging. 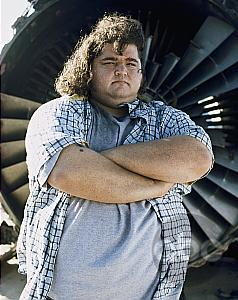 The episode in question—Everybody Hates Hugo, oddly enough—begins with a montage of Hurley in “the hatch” (an underground bunker discovered by the castaways in season one) stuffing his face with snacks, peanut butter, and ice cream.

Hurley then awakens. His feeding frenzy was merely a dream—a dream fueled, we learn, by Hurley’s concerns about his new “job” on the island. It turns out the castaway’s nominal leader, Jack, has asked him to inventory the storehouse of food they had just discovered in the hatch. Until this inventory is done, Hurley must deny all requests for food from the other (hungry) castaways.

We quickly learn that Hurley is oddly tormented by this job. He first tries to keep the food secret. When word leaks out, he tries to avoid contact with others. When his friends find him and ask for food, he panics. At one point, he even tries to explode the storehouse with two sticks of dynamite. What gives?

The episode’s flashbacks offer an explanation. In the first flashback, we see Hurley win the lottery. An instant millionaire, Hurley nonetheless returns to his job at Mr. Cluck’s (a fast food chicken joint) without telling anyone, not even his mother. At work, his belligerent boss confronts him with surveillance tape footage that shows Hurley eating an unauthorized bucket of chicken. “You owe the company for an eight-piece dark meat combo, Raez,” the manager snarls.

Liberated by his lottery winnings, Hurley discards his hair net and promptly quits. His best friend and co-worker, Johnny, then quits in solidarity, and the two friends make a day of it. They hit the record store. Hurley asks out a cute girl. They steal 100 lawn gnomes and then spell out the words “cluck you!” on their boss’s front lawn.

All the while, Hurley keeps his newfound wealth a secret. Toward the end of their adventures, Hurley turns to Johnny and says, “Dude, promise me that no matter what happens, we’ll never change. This will never change.”

His friend, puzzled, duly promises, and they steer their van into the quickie mart where Hurley bought his lottery ticket. A camera crew is there interviewing the shopkeeper, who turns and recognizes Hurley: “that’s the guy! That’s the winner!” As the scrum of media and well-wishers press in on Hurley, the camera focuses on Johnny. His face is a heart-sinking mix of shock, envy, and anger.

Cut back to the island. Hurley’s friend Rose is attempting to stop him from blowing up the food. She can’t understand why he’d do such a thing. Hurley begins yelling:

Let me tell you something, Rose. We were all fine before we had any potato chips. And now we’ve got these potato chips. And now everyone’s going to want them! So if Steve gets them, Charlie’s pissed. But he’s not going to be pissed at Steve. He’s pissed at me!…And it’s going to be “what about us?” Why didn’t I get any potato chips?” C’mon help us out, Hurley…Then they’ll get really mad and start asking “why does Hugo have everything? Why should he get to decide? They’ll all hate me!

What is most intriguing is what happens next. Hurley finishes the inventory, and then approaches Jack with a proposal. Rather than ration the food, a little here, a little there, to the weak or to the strong, let’s just give it all away. To everyone. Right now. The episode thus ends with an uplifting montage of the castaways sharing the hatch’s bounty, smiling, laughing, and slapping Hurley on the back.

Fredric Jameson once wrote that “all contemporary works of art—whether those of high culture and modernism or mass culture and commercial culture—have as their underlying impulse…our deepest fantasies about the nature of social life, both as we live it now, and as we feel in our bones it ought rather to be lived.”[5]

What I felt in my bones when I watched this episode was a yearning for the collective life of the castaways. Whatever else happens, these people are in it together. When times are bad, they are bad for everyone. When times are good—like when Hurley liberates the hatch’s food—they’re good for one and all alike. If you catch two fish, you share the other one. If you hunt the boar, the whole camp celebrates. There are no separations of wealth and class—the separations that, in the flashback, ultimately split Hurley off from his friend Johnny.

(In this regard, it is instructive that the only remaining capitalist on the island—Sawyer—is treated as an outsider for much of the series due to his commitment to private property. Right after the crash, Sawyer hoarded the supplies he pillaged from the ruined fuselage, and he subsequently made many enemies as a result.) 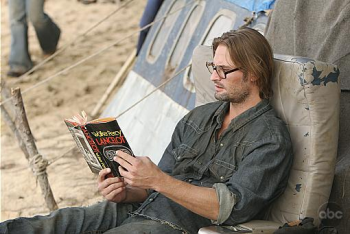 Meanwhile, off the island, we live in a moment of profound ideological closure. The Democratic Party has fielded eight presidential candidates thus far, and all that any of them can offer us is the promise that our same anxious, privatized lives of moving back and forth from the “home box” to the “work box” in the “car box” will yield slightly more in terms of wages and benefits. Thus is the state of the American left.

Everyman for himself is not going to work. It’s time to start organizing. We need to figure out how we’re going to survive here…Last week most of us were strangers, but we’re all here now. And god knows how long we’re going to be here. But if we can’t live together, we’re going to die alone.

Of course, as Jameson would point out, Jack was really speaking to us.

To be sure, moving beyond the mere dreaming of alternatives takes more than television. It will take a political movement that links the dreaming to the doing. But somehow I find hope in the fact that even this hyper-commercialized medium can, upon occasion, help nurture collective dreams through some very lean times. 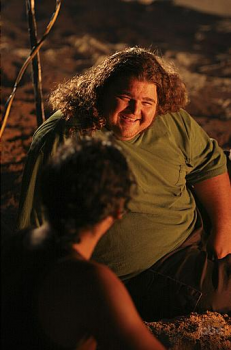