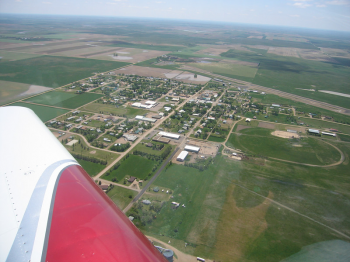 As Gregory Waller has noted, much of what we know about screen history derives from urban experience (Waller 2002). This is certainly true of television history; television business practices, consumption patterns and saturation levels are simply easier to track across dense city populations than across sprawling—frequently transient—rural ones. I was reminded of this the other night at dinner, as I told some friends about my experiences visiting what I came to think of as “Dish Towns” in the northern plains states, over a three year period beginning in 2002.

Dish Towns are sparsely-populated enclaves of farmhouses and small town dwellings—sometimes spanning as much as three hundred miles of state roads and highways—that pepper the landscape across rural America. This is a landscape marked mostly by farms and prairie grass. Rusting tractors and gasoline pumps sometimes perch on hilltops, a testament to the increasing pressure on small farmers to sell and move on. It is also a landscape marked by hundreds of TV satellite dishes.

I call these enclaves Dish Towns, rather than Dish Networks, specifically in order to link them to the immigrant Dish Cities, described by Hamid Naficy (Naficy 1993) and others. Like densely populated urban immigrant communities, the rural population I am describing depends on satellite dishes to maintain contact with a perceived “home” culture. The fact that rural dish users reside in the country whose culture—without the dish—is so frequently unavailable to them is one of the things we need to take into account when we discuss audience.

In 2001 my 84 year old mother left San Francisco and moved back to the tiny South Dakota town where she had been born. Shortly after she moved, she suffered a debilitating stroke. Unable to care for herself and too frail to move closer to her children, she moved into the nicest rest home I could find. And I began the period of my life that my son calls my On the Road phase—making six trips a year to a part of the country about which I knew very little.

The first thing you learn as you drive across the northern plains states is just how large this country is. I mean really learn it, in a visceral way, rather than as some abstract notion. There are long expanses of road—sometimes as much as 200 miles—where you don’t even see a farmhouse. Signs are often misleading; and you quickly learn to fill the gas tank where you can, since some towns are too small and impoverished to support even a single commercial pump. Radio reception is poor; cell phone use is frequently impossible. “Rest stop” can mean anything from the full service oasis most of us are used to (indoor restrooms, a place to walk the dog, vending machines) to a picnic table and benches chained to a cement block by the side of the road. “This is where our ancestors used to hallucinate from thirst, go mad and die,” my husband would grimly quip. Frequently we saw animal carcasses and skulls on the roadside; there was a lot of roadkill.

The second thing you learn is how hard it is to get good TV. To begin with, there are simply fewer channels. A quick look at the West River Cable Television website confirmed this. In Bloomington, Indiana (pop. 120,563) where I reside, the basic no-frills cable package includes 65 channels. In the area comprising Minot, Dickinson, and Bismarck, North Dakota, basic cable includes 39 channels. It also costs more—$25 per month compared to the $19.99 which basic cable subscribers in Bloomington pay. This discrepancy—higher costs for fewer channels—extends all the way across the spectrum. Digital cable in Bloomington costs $40 a month for 200 channels; digital cable in the West River area costs $60 month for sometimes as few as 100 channels. The maximum number of cable channels available in this region is 195 (as a point of comparison, at the time of this writing a two bedroom, two bathroom house in Minot, North Dakota rents for approx $525 a month; a two bedroom apartment rents for $300; in Bloomington, rents are more than double that amount).

In the small motels I came to know so well, cable reception was terrible.
At first I thought this was simply the fault of the TV sets themselves. These were low budget operations and the sets were frequently ancient. But soon I noticed that even the more upscale places—the Travel Lodges and Hamilton Inns which provided brand new sets–had trouble consistently offering a quality picture. Turner Classic was not available at the Mirror Lodge motel in Hettinger, North Dakota; neither was CNN. Good Morning America became one of my most reliable sources of national news during long stretches of my many trips. Local newspapers frequently do not cover international news at all and only cover national news that is of immediate local interest (a group of North Dakota soldiers is sent to Iraq, for example). Even in urban corporate stores —the Starbucks in Bismarck, North Dakota and the Borders in Rapid City for example—it was difficult to find a copy of The New York Times dated for the date of purchase. As a result, whenever I moved outside an area that could pick up CNN or NPR (which was all too often) I also lost the ability to get reliable, extensive news coverage that was less than two days old.

Access to Hollywood is frequently as limited as access to Washington D.C. The town of Hettinger, North Dakota (pop 1,574) has one tiny single screen movie theater. The bill changes weekly. Films are shown Thursday through Monday in a single screening at 7:30 p.m. If the film of the week is kid-friendly, there is an additional Sunday Matinee. On Thanksgiving weekend, 2003, the theater was screening (Disney, 2003). I was in the mood for something a little edgier, so I began checking listings for single screen theaters within an easy driving distance (in the plains, “easy” means up to 100 miles). I was surprised to learn that the theaters in Dickinson, Bowman, Lemmon, and Mott were all showing Brother Bear. On subsequent trips I checked to see if this was an anomaly, a kind of Thanksgiving weekend need to have kid-friendly fare close to home. What I discovered was that the Brother Bear booking schedule was the rule rather than the exception. On any given weekend , the area from Bison, South Dakota all the way to Rapid City in the south and to Bismarck in the north was saturation booked with one title. This means that for people living in this area, seeing a different film would require up to a four hour drive. Also, since the pressure is intense to screen films rated PG-13 or lower, there are some movies which never make it into the area at all. I am not speaking here of foreign or even edgy independent titles, but rather major Hollywood releases.

No wonder, then, that the further into the plains I drove, the more TV satellite dishes I saw—not just attached to small town houses, but also attached to farmhouses and little country churches located on desolate strips of highway. Dish TV is really the best option for staying connected that residents of the northern plains have (regional internet connections have their own vexed histories). TO BE CONTINUED

Gregory Waller. Moviegoing in America: A Sourcebook in the History of Film Exhibition. Malden MA: Blackwell, 2002.