Bringing the War Back Home: YouTube and Anti-War Street Theater

In my two previous Flow articles, I have focused on the role of YouTube and other video sharing sites in shaping political discourse. In particular, I have been interested in how YouTube has become identified with a more authentic form of political discourse defined against what is often pejoratively referred to as the mainstream media. However, while I am deeply concerned about the harmful effects of media consolidation, for example, I am also skeptical about the framing of YouTube as an authentic alternative to commercial media. In many cases, videos that appear on YouTube simply reinforce pre-existing perceptions of presidential candidates that have been circulating within the mainstream media, as we saw with the “John Edwards: I Feel Pretty” video (and, yes, I still find the Edwards video hilarious). At the same time, I recognize that YouTube stands in for the potentials of a more democratic media in which more people feel included in the political process.

These issues recently crystallized for me when I came across the Operation First Casualty video on Jason Mittell’s blog.

The video depicts a street theater performance by Iraq Veterans Against the War (IVAW), which was filmed over Memorial Day weekend and posted to YouTube soon afterwards. The street theater performance has the strictly pedagogical function of depicting the experience of war for American citizens who may be oblivious to the “reality” of the war because of media representations of it. The Operation First Casualty video introduces several crucial and related questions, including questions about the potentials for street theater to disrupt everyday perceptions of the war in Iraq, the role of YouTube and other video sharing sites in mediating those representations, and the definition of political speech with regards to members of the military.

Operation First Casualty (OFC), which takes its name from the adage that the first casualty of the war is the truth, uses these street theater performances to depict the experience of war for American soldiers and Iraqi civilians. As of early June, three OFC events had been staged in Washington, D.C, New York, and Santa Monica, with a fourth scheduled for June 18 in Chicago. In their performances, the soldiers simulate sniper fire and mass detentions. The soldiers perform in full military gear minus actual weapons, instead using extended arms to represent their guns. They arrest civilian volunteers, forcefully pushing them to the ground, cuffing them, and placing bags over their heads. While the soldiers emphasize their attempts to depict their experiences in Iraq as realistically as possible, there is, of course, a sense of unreality in seeing the soldiers perform without weapons in these major centers. In fact, it is this sense of unreality that—for me at least—gives the performance its power. Representations of war that rely on standard definitions of authenticity—such as many grunts’ eye documentaries—can easily be recuperated into politically ambiguous war narratives, but this form of street theater makes it more difficult to insert into these standard narratives. In addition, their performances make it more difficult to separate the performer from the audience, to separate the soldiers’ experiences from the everyday lives of American citizens. As more than one soldier comments in the OFC video, their performance is designed to “bring [the war] back home.”

These images of soldiers roaming through Times Square and making arrests and subduing protests is a bit jarring, and the meerkat video powerfully captures the puzzled reactions of onlookers who became caught in the middle of the performance while doing some Memorial Day weekend shopping. The video itself opens with a series of close-ups of the soldiers’ feet and hands as they march into Times Square while also calling attention to Times Square as a hypermediated space filled with billboards, screens flashing basketball scores, and billboards promoting the latest Broadway shows. This juxtaposition of advertising, shoppers, and soldiers in one of the primary centers of media and consumer culture calls attention to the contrast between civilian and soldiers’ experiences of the war, emphasizing the limitations of mainstream media coverage of the war and making the scene in Times Square an effective form of street theater. These performances are also clearly designed to oppose televised coverage of the war, and both the Washington and New York performances took place in locations identified with TV news. 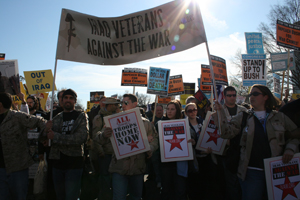 In the video available on the meerkat media blog and eventually uploaded to YouTube, apparently by someone not affiliated with the production of the video, we are also presented with interviews with several of the participating soldiers who explain their opposition to the war and their reasons for participating in OFC. The video culminates with highlights from the IVAW rally after the street theater performance. These contextual details diminish, to some extent, the disruptive force of the theatrical performance; however, they also effectively connect the street theater with the larger anti-war movement, emphasizing in particular the human consequences of the war in Iraq. It is also worth emphasizing the more general role of YouTube in mediating these images of protest. Of course, YouTube has widely become identified with the assertion that the means of production—and distribution—of political materials is available to anyone with the right computer equipment, and the site has become a major center for debates about DIY citizenship and fixing a broken political process.

Much of the controversy regarding OFC has focused on the question of whether any of the soldiers may have violated military regulations while engaged in their street performances. Specifically, the Pentagon has begun an investigation of at least one of the more active members of IVAW, Marine Sgt. Adam Kokesh, who has been accused of attending a political event while wearing his military uniform. If he is found guilty, he would be subject to receiving an “other than honorable discharge,” and his educational and other benefits could be revoked. The military is arguing that because Kokesh remains a member of the Individual Ready Reserve (IRR), he remains subject to military rules about political speech, while Kokesh’s defense is asserting that IRR members are technically civilians and therefore not subject to regulations about political events. Kokesh’s case is simply the latest site in which battles over free speech are taking place, especially as those free speech rights are inflected by military service.

While Kokesh’s free speech rights are certainly at issue—and I think it is incredibly important to assert these rights—the discussion also raises valuable questions about what counts as “political” speech and, specifically, in what way the street performance counts as political speech. In the strictest sense, of course, members of the IVAW avoid endorsing specific political candidates, however, in the broader sense in which “everything is political,” the IVAW street protests also represent a specific and powerful attempt to make visible the violence being conducted in Iraq on a daily basis, and while the video recording posted to YouTube may not approximate the experience of witnessing the soldiers’ performances live, it does illustrate some of the potential for a more participatory media culture.